You are here: Home/ News/ Match Report U20 Munster Final 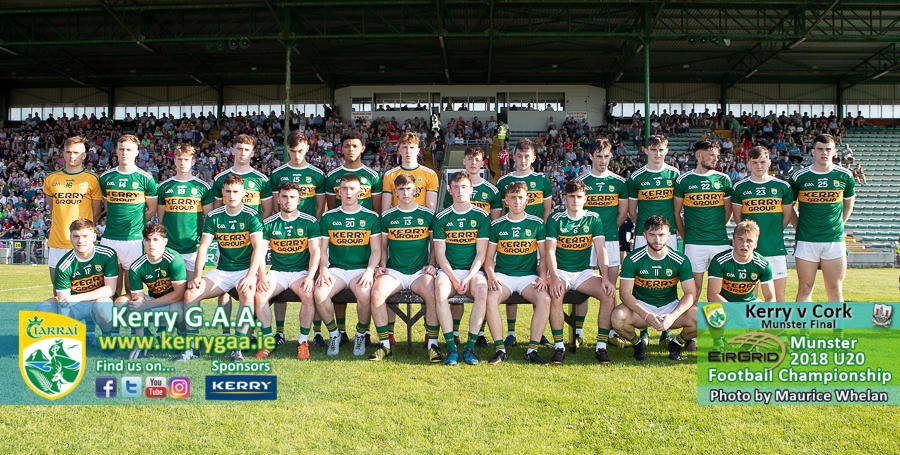 Success breeds success and at the moment Kerry football is enjoying a golden spell.

The sun is shining in the Kingdom and all is well in the football world right now  as the Kerry U-20 side completed the clean sweep of Munster titles  in one week as they fought back to overpower a strong Cork side who at times threatened to spoil the Kerry party.

Munster titles at Senior, Junior and Minor grade,  were added to by this free scoring Kerry U-20 side under manager Jack O’Connor who ensured that Kerry would be  the first county whose name would be engraved in the U-20 Trophy.

And when the team is successful, that talent level can then keep it there. That is what has made Jack O’Connor such a gifted  and successful coach as he can change a midfielder/full-forward like Stefan Okunbor into a precocious looking fullback as he has done in the past with players like Kieran Donaghy, Mike McCarthy and Shane Ryan to mention but a few.

Credit each and every one of the Kerry players who played in such searing heat which saw a water break being taken midway through both halves.

Errors or below par performances have to judged on the playing conditions ( searing heat and hard surface) and the strength of the opposition as Cork really put it up to Kerry.

But Kerry having battled tit for tat for forty minutes, wore Cork down in the final twenty and this stern test will do Kerry a power of good as the games that went before  were less competitive than in house training games. So now the Kerry management team know what they have and their immediate aim will be to win their next outing ( against Leinster champs) and then ultimately try and win the inaugural All-Ireland U-20 title . But lets not get carried away – lets just enjoy as fans the rich array of talented  footballers who are coming off the assembly lines and lets savour four Munster titles in seven days and the men behind the scenes who have made it happen.

Cork made an explosive start to this game scoring three points without reply in as many minutes from Colm O’Callaghan, Damien Gore and Colm Barrett as the tall Mark Keane was causing the Kerry fullback line trouble on the edge of the square.

But Kerry soon settled and were level by the 9th minute thanks to points from Cormac Linnane, Fergus Clifford and David Shaw and then Kerry struck for a crucial goal, which was sublimely finished David Shaw to the bottom corner of the Cork net.

Stefan Okunbor was now getting to grips with Keane and with Mike Breen also helping out the game was developing into a titanic battle. Cork then rattled off four points on the trot from Tadgh Corkery and three from Chris Óg Jones as Cork moved 0-8 to 1-3 in front by the 21st minute.

Kerry responded and levelled with points from Cormac Linnane and a Donal O’Sullivan free and both sides swapped points as they retired level at the interval (1-6-0-9).

Cork thanks to a Chris Óg Jones free were in front again within two minutes of the restart but Kerry took over with Stefan Okunbor curbing the dangerous Mark Keane, while Graham O’Sullivan , Dan O’Brien and Mike Breen were outstanding at the back for Kerry.

The crucial score of the half came in the 41st minute when Fiachra Clifford cut through and Eddie Horan just on the pitch drilled the ball to the Cork net. Chris Óg Jones kept Cork within striking distance but Kerry struck again in the 53rd minute when Donal O’Sullivan was hauled down for a penalty which Mark Ryan expertly slotted home to the Cork  net and suddenly Kerry were six clear and two late Donal O’Sullivan ensured a six point win and booked their place in the All-Ireland semi-final.