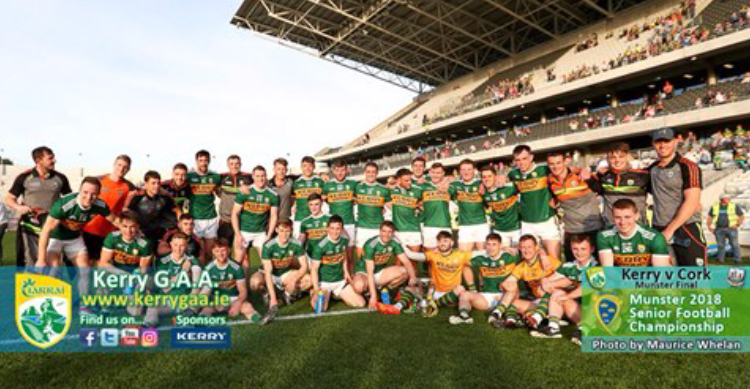 Kerry have won their 80th Munster Senior Football trophy and an astonishing 5th “Six in a row” after a comprehensive 17 point win in Páirc Uí Chaoimh on Saturday evening.

Cork kicked off the first Munster Final in the new look Páirc Uí Chaoimh stadium in fantastic fashion as full back Jamie O’Sullivan goaled after just 90 seconds having found himself free at the back post to tap in. Kerry responded to the early set back in fantastic fashion also as David Clifford pointed in the 4th minute before Stephen O’Brien found the back of the net 30 seconds later running through the Cork defence and finishing into the net.

Cork managed to get their second goal in the 9th minute after Full Forward Mark Collins found himself in a similar position to O’Sullivan as he was free at the back post to tap into an open net. The sides exchanged further scores after their goal scoring runs as Paul Geaney,Luke Connolly and James O’Donoghue all scoring points as Cork led by 1 point after 14 minutes.

Kerry got back into their stride shortly after going 4 points up after 20 minutes as Paul Murphy, Sean O’Shea, Paul Geaney and two from James O’Donoghue had them settled inside the rebel county.

Three Black cards were shown in the first half with Stephen O’Brien being taken off for Kerry while Sam Ryan and Ruairi Deane were taken off for the Rebels. Kerry never let go of their lead for the remainder of the half as Paul Murphy, David Clifford and Paul Geaney capped off a great scoring run in the first half leading by 7 points at the break with the halftime score reading Kerry 1-11 Cork 2-1.

Kerry had the ball in the net shortly after the restart in the second half as Paul Geaney pounced onto a lose ball and smashed the ball past Mark White into the Cork goal. Kerry extended their lead further in the 37th minute as Sean O’Shea sent over a 45 to stretch the lead out to 11 points.

Luke Connolly managed to score Corks first score since the 9th minute in the first half as he sent over a free just inside the 21. After a stoppage of play for a heated skirmish, Kerry broke clear and almost created a goal scoring chance but James O’Donoghue sent the ball over the bar for a point.

By the 54th minute Kerry looked home and hosed as Paul Geaney managed his 4th point of the afternoon to put Kerry 12 points in front. Gavin White added a further point in the 57th minute to extend the lead to 13 following a fisted effort going over the bar.

Sean O’Shea added another 45 to extend the already sizeable lead out further before Cork managed their third point of the afternoon through Peter Kelleher in the 65th minute. Kerry wrapped up matters late on in the half as first Paul Geaney hit over a point before combining with Kevin McCarthy before sending the ball into the net for Kerry’s third goal and his second of the afternoon.

A late effort from Mark Collins did little to change the outcome of the afternoons game as his effort was cancelled out in the 73rd minute as Barry John Keane fisted the ball over the bar to give Kerry a 17 point lead as they went on to win their 80th Munster Title on a final score of Kerry 3-18 Cork 2-04.