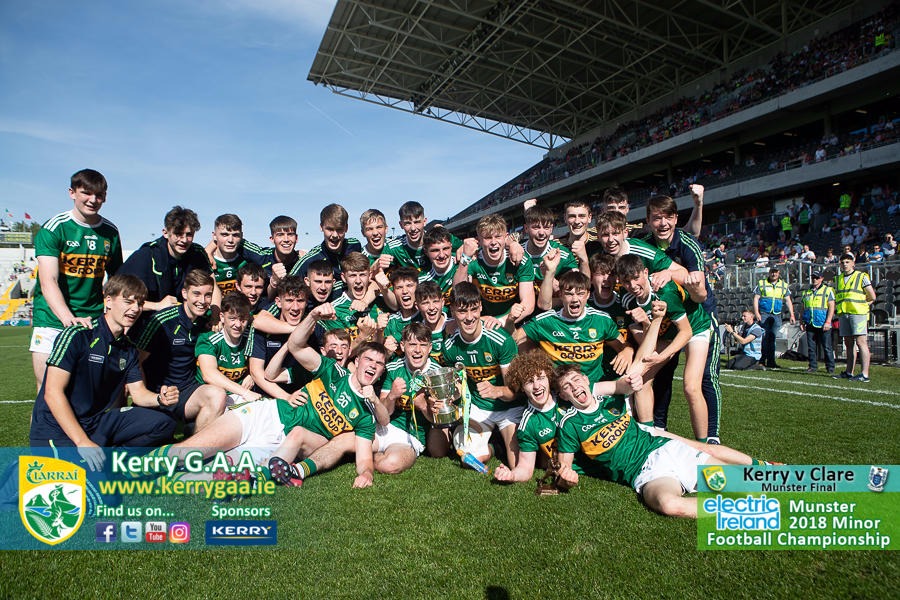 Kerry opened the scoring in the second minute as Jack O’ Connor found space from his marker to curl a shot over from 21 metres. Paul Walsh extended the lead for the Kingdom shortly after in the fifth minute with another great curling effort.

The banner struck in the 10th minute as Thomas Kelly broke through the Kerry defence and hit a low shot under Marc Keliher to put Clare one point up. From the resulting kick out Kerry broke on the attack and Dylan Geaney calmly pointed to level matters.

Kerry struck their own goal in the 13th minute after a Paul Walsh free struck the post Dylan Geaney leaped highest to gather the ricocheted shot and struck higher into the Banner goal. Kerry extended the lead to four points in the 16th minute as Paul O’Shea pointed from play before Killian Falvey added another to put Kerry 5 points up after 17 minutes.

Kerry looked comfortable in thee early stages of the opening half as Paul Walsh added another score to put Kerry 6 points to the good in the 18th minute. By the 23rd minute Kerry had now gone 10 points up as Darry Rahilly, Darragh Lyne Dan McCarthy and Paul O’Shea all registered scores.

As we were approaching half time Kerry were in complete control of the opening half laying siege to the Clare kickout as they failed to leave their 45 for 3 minutes as Dylan Geaney, Michael Lenihan and two frees by Paul Walsh had them ahead by 14 points as we reached the 29th minute. Clare registered their first point of the game in the 29th minute as midfielder Emmet McMahon pointed.

With one minute added on Paul Walsh again found space to point his 5th of the afternoon as Kerry went back in front by 14 points. The last action of the half saw Shane Meehan convert a free as Kerry lead by 1 points at half time, 1-15 to 1-02.

Straight from the restart Clare got the opening score of the half as Tadhg Lillis pointed from the 13 meter line. Kerry scored their second goal in the 35th minute as Dylan Geaney managed to score his second of the afternoon after yet another Paul Walsh free managed to ricochet this time off the crossbar and Geaney palmed it into the net.

Clare could have had goal number 2 in the 42nd minute as Mark McInerney managed to gather a loose ball and run through on goal but his shot was well saved by Marc Kelliher. From the resulting 45, Emmet McMahon managed to convert with ease. Shane Meehan added another shortly after as Clare trailed by 14 points with 45 minutes played.

Back to back scores by Ruaidhrí Ó Beaglaoich put Kerry ahead by 21 points in the 59th minute and ended up being the final score of the game as Kerry managed to record their 6th Munster Title win in a row with a final score of 3-21 to 1-07.