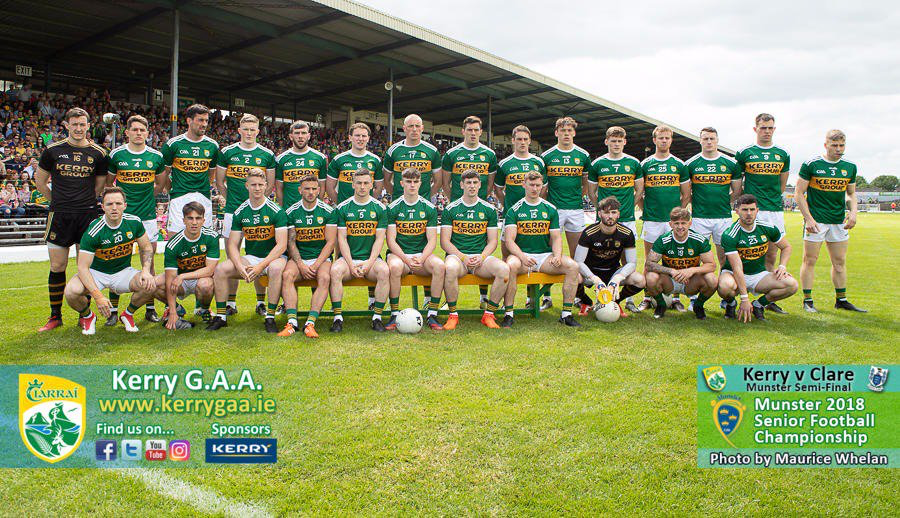 Kerry are through to the Munster Senior Football Final after a comprehensive victory over Clare in the Munster Semi Final in Fitzgeralds Stadium Killarney.

Kerry were dominant in their performance as Clare proved a worthy adversary in the semi final but on the day just could not get the engine running against a youthful and energetic Kerry side but also failed in the shooting department hitting 11 wides.

Kerry now advance to the Munster Senior Final where they will face the old foe Cork in 3 weeks time.

Clare took the lead less than 1 minute into proceedings this afternoon as Eoin Cleary pointed from a free. Clare would double their advantage just 30 seconds later as Pearse Lillis ran forward and pointed just inside the 21 yard line. As the clock ticked past the second minute Kerry took control, Micheál Burns was the first Kerry debutant to score, as he ducked and dived past his marker to reduce Clare’s advantage. Sean O’Shea also making his debut in the championship scored 3 back to back points putting Kerry ahead by 2 points with 10 minutes played. Kerry executed a footballing masterclass of scoring in the opening half, David Clifford and Stephen O’Brien managed to register their scores as Paul Geaney and James O’Donoghue would not be left out as all Kerry forwards had scored before the 21st minute leaving the score at Kerry 0-9 Clare 0-3.

The Kingdom played with a real swagger using direct passing and quick movement with proved fruitful against the Clare defence with Micheál Burns, Sean O’Shea, Jack Barry and James O’Donoghue increasing Kerry’s lead before the half hour mark to double scores. Paul Geaney put the Kingdom ahead by 13 points in the 34th minute before Eoin Cleary pointed a free to leave 12 between them at half time. Kerry 0-16 Clare 0-04

The second half saw Clare stage a mini revival with Jamie Malone scoring two points either side of a Stephen O’Brien 3rd point for the Kingdom. It was short lived however as Geaney got his 4th and 5th from play with a James O’Donoghue free and Sean O’Shea point from play putting Kerry out of sight with 10 minutes played in the second half.

The second ten minutes of the second half saw both teams trade scores with Cleary and Tubridy pointing from free’s for the banner county and Barry John Keane and James O’Donoghue pointing for the Kingdom. Kerry went 6 minutes without scoring before David Clifford pointed a free and Barry John Keane scored his 2nd coming off the bench within seconds of each other.Kerry were dominant in their forward play all game and further scores from Sean O’Shea and Paul Geaney had Kerry ahead by 18 points just after the 65th minute. Eoin Cleary managed to convert a free in the 66th minute to score Clare’s 10th and final point of the afternoon. Kerry were not done with their fruitful scoring display and managed to score 5 more late points to manage 32 points in the game, something we haven't seen in a long time from a Kerry side in a championship outing.