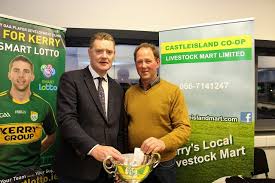 Dr Crokes and Dingle were involved in an one sided County Senior Club Final  as Crokes powered their way to five Senior Club Championship wins in the last  seven years at a windswept Austin Stack Park on Sunday afternoon in a final that lacked nothing in intensity.

It was a game of cards of all different colours, with Dingle collecting three black cards in the opening forty minutes, Barry O’Sullivan (13), Mikey Geaney (20) and Michael Flannery (36) while Brendan Kelliher received a second yellow just before the final whistle.

Dingle made the better start with frees from Paul Geaney and Conor Geaney but with Daithí Casey dictating matters from midfield, and Colm Cooper pulling the strings at wing forward as he had the measure of his marker Brendan Kelliher, Crokes soon began to kick points for fun with Tony Brosnan kicking 0-4 from play in the opening half.

Then in the 20th minute came the crucial moment in the opening half when Mikey Geaney curled the ball past Shane Murphy into the Crokes net and before the kick-out could be taken, the referee was alerted to an off the ball incident which resulted with Kerry captain Fionn Fitzgerald being shown a straight red card.

Mikey Geaney was to follow with a black within a minute  but it was Crokes, despite being a man down who finished the half the stronger adding four points from Casey, Kieran O’Leary, Brosnan again and Brian Looney, while Dingle’s only response was a Paul Geaney free as Crokes retired 0-13 to 1-4 at the interval.

The expected Dingle fight back never materialised as Crokes even with 14, just kept possession and with slick hand passing with Colm Cooper being the fulcrum and the introduction of Kerry wingback Gavin White for his first game of the year merely emphasised the vast chasm between experienced Crokes and youthful Dingle.

In fact Dingle did not register a score until the 56th minute by which time were 0-16 to 1-4 in front. Eight minutes of injury time saw Dingle add points Conor Geaney, Mathew Flaherty, Paul Geaney (free) and Paul Devane but Crokes got minors off the bench from David Shaw and Paul Clarke as well as a superb goal from Gavin White.

It was another Crokes show of strength and while Dingle will improve, there are more sides wondering how this Crokes machine can be stopped in the autumn come SFC time!

Dingle boss Sean Geaney was gracious in defeat ““It was a tough day at the office and you just have to be realistic about these things and say you were playing the former All-Ireland champions and they showed their pedigree today. They were very slick, played well from the word go and lots of the time we were just chasing shadows.  But Dingle is a young team and the whole thing for us is that we are on a learning curve and if we don’t learn from this defeat we are going nowhere. If you back ten or twelve years Crokes were in our position with a young team and they had to learn lessons from defeats. You have to start learning your lessons sometime   and we got some lesson today”

Geaney admitted that Dingle underperformed “As a team we did not play well enough full stops. I think the lads realise that and know that but I not going to beat the boys up about that because they came to play and it just did not happen on the day. We missed chances, we kicked ball away and you don’t get away doing that against Crokes because of all teams they are the team that will punish you.  The second half was disappointing but the lads gave everything they had and I am not going to be on their case. The age profile of the team is very young and while they might have success underage this is the real world now and you are coming up against very seasoned footballers. Crokes whether they are a man down or a man up they seem to be able to control games. When they had the lead we had to come out and chase them and they just found the spaces and tapped over points at will, so fair play to them and great credit due to them”