You are here: Home/ News/ Kerry Minors vs Tipperary 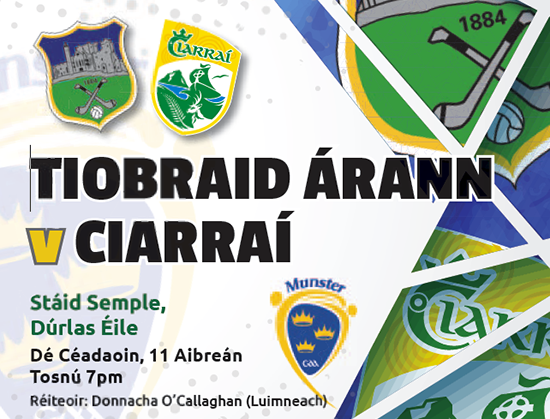 We wish the Kerry Minors every success as they begin their Munster campaign with a quarter final away fixture to Tipperary in Semple Stadium, Thurles tonight at 7pm.

If they win their opening game, they have a break until May 8th but if they lose to Tipperary they will be out again next week to face the loser of the Limerick V Clare game.

As was agreed at a County Committee meeting, this year’s captain was chosen by the Manager, the County Chairman and the Liaison Officer, in consultation with East Kerry. On Monday evening the team was announced and Paul O’Shea, Kilcummin has the honour of being named captain.

The Kerry Minors will play Tipperary on Wednesday at 7pm in Thurles in the Electric Ireland Munster Minor Championship Quarter Final. The team is captained by Paul O'Shea, Kilcummin. The Team is as follows