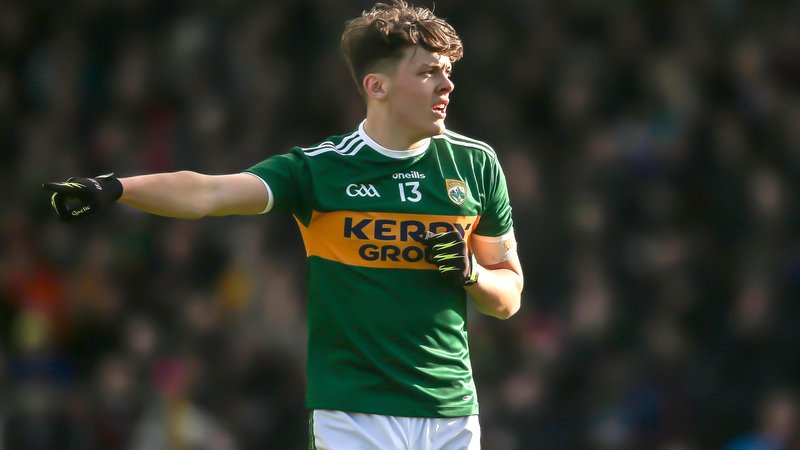 A fantastic effort from David Clifford helped Kerry to a five point win in their Final home league game of this year’s Allianz Football League in Austin Stack Park Tralee.

Kildare were looking sharp in the opening stages enjoying a great run of form going two points up after 10 minutes with Kevin Feely, Tommy Moolick and Niall Kelly all scoring.

Nerves were set in early and the mix of youth and experience in Michael Burns and Paul Geaney had the Kingdom level again after twelve minutes.

Daithi Casey and Daniel Flynn both exchanged scores as neither side wanted to give an inch.

Kerry’s sharpshooters really came into their own as they led by seven points as we neared the half hour mark. Paul Geaney, Paul Murphy, Daithi Casey, David Clifford and two for half forward Kevin McCarthy gave Kerry an understandable edge. David Clifford scoring the half's best score with a free outside the 45.

Daniel Flynn registered the last score of the half. Kerry led by six at the break Kerry 0-11 Kildare 0-05.

Kildare came out the better in the second half reducing the deficit to four points after thirty nine minutes with Ben McCormack and two from Daniel Flynn either side of a Paul Geaney score putting the pressure back on the Kingdom.

Kerry were looking to stop Kildare’s fightback in the early stages of the half but Kildare still held them tight as Barry John Keane, David Clifford pointed either side of Daniel Flynn and Paddy Brophy efforts as Kerry still led by four points after fifty four minutes.

The game was still a close necked affair after the hour mark as Kerry still held a four point advantage, David Clifford came into his stride adding two more points putting six between them as we reached seventy minutes.

Kildare managed two late scores as both corner backs came up looking to prevent Kerry from escaping the relegation zone with Peter Kelly and Mick O’Grady pointing. Kerry’s last score came from their number one Shane Murphy as he pointed a free from just inside the 45, with the Final score here at Austin Stack Park 0-19 Kildare 0-14.