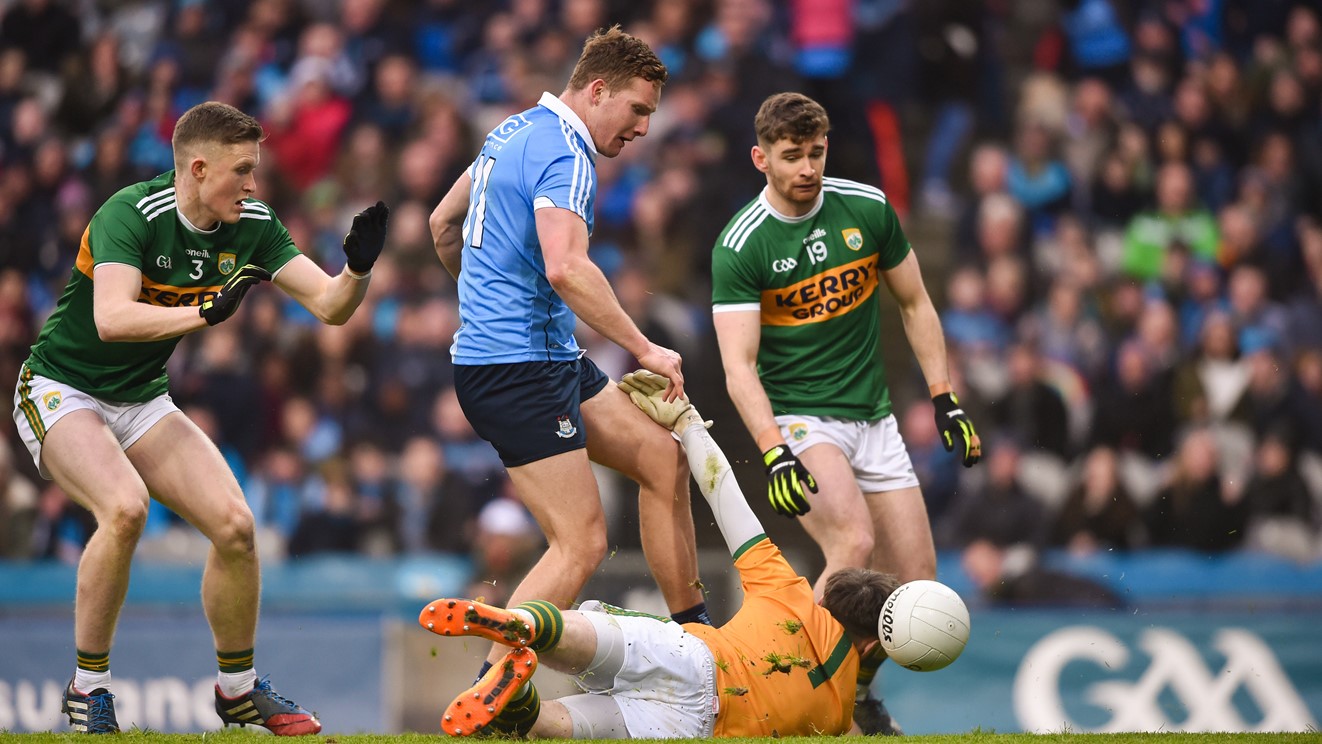 Dublin defeated Kerry in Round 5 of the Allianz Football Leagues in Croke Park by 12 points with a dominant second half performance sending the Dubs joint top of the division 1 table with Galway on 10 points. The game opened quickly with both teams trading scores, David Clifford getting his first senior football point in Croke Park however it was cancelled out immediately by Colm Basquel pointing for the Dubs. Kerry took command of the game in the next few minutes with Kevin McCarthy pointing from a goal chance that Cluxton palmed over. Geaney put the Kingdom 2 points up before Séan O Shea capitalized on a Dean Rock missed free to put Kerry 3 points to the good in the opening 10 minutes.

The 10-minute mark saw a change in command in the game as 2 quickfire Ciaran Kilkenny points brought Dublin to within 1 point with Dean Rock putting a glorious goal opportunity wide minutes later. Kerry quickly got up the other end of the field, Clifford pointing again in the next play to extend Kerry’s lead to 2 points with 15 minutes gone. Dublin pulled 1 point back through Dean Rock with the first free of the game a minute later. The first big goal chance came after 17 minutes as Paul Geaney burst through only to strike the post with the rebound falling to Kevin McCarthy who pointed it. What could’ve been a 4 point lead was quickly taken back to 1 Johnny Cooper with a well taken point up the other end for the Dubs leading to the turning point. With 20 minutes gone Niall Scully fisted the ball into the back of the net to give Dublin the first goal of the game, and they never looked back from there. Dublin extended their lead to 3 within 2 minutes with Dean Rock pointing from a free. Kerry could’ve been level as Séan O Shea rounded Cluxton only to strike his shot wide. Clifford however pointed from a free a minute later. Kerry gained a little momentum winning the kick out and Micheál Burns fisted the ball over the bar to bring Kerry back within 1 point.

Dean Rock pulled Dublin’s lead back to 2 points with his third point of the game, first from play. Ciaran Kilkenny pointed seconds later to give Dublin a 3-point lead. The end of the first half saw the game get fiery with 2 black cards coming for John Small and Barry O’Sullivan in two separate incidents. The half time score Dublin 1-08 0-08 Kerry.

The second half saw the introduction of Michael Geaney and Barry John Keane for the injured Séan O Shea and Paul Geaney late in the first half. Dublin began to take a hold of the game in the opening period of the second half with quick points from Paddy Andrews and Paddy Small taking the Dubs to a commanding 5 point lead. With a 5-point lead Dublin became confident. The Dubs burst through the defence testing Shane Murphy who made a good save only for the rebound to fall to Ciaran Kilkenny who smashed it into the back of the net to put Dublin double scores ahead of Kerry. It could’ve been 11 points within minutes but Shane Murphy to his credit got down low to his left and saved well. Basquel pointed again for Dublin with Dean Rock hitting the post moment later with yet another goal chance. Niall Scully and Paddy Andrews from play and Dean Rock from a free gave Dublin a 12 point lead. The Dubs scoring 1-6 in the second half without a single reply from the Kingdom Micheál Burns finally puts Kerry on the scoreboard after 18 second half minutes to reduce the deficit to 11 points. Paddy Andrews with a sublime score and Philly McMahon added points for Dublin either side of a Michael Geaney point and a David Clifford point from a free to keep the lead at 11 with Cormac Costello pointing just before the end of regular time to seal Dublin’s 12-point win.