You are here: Home/ News/ Dr Crokes and An Ghaeltacht advance to Munster Club Finals 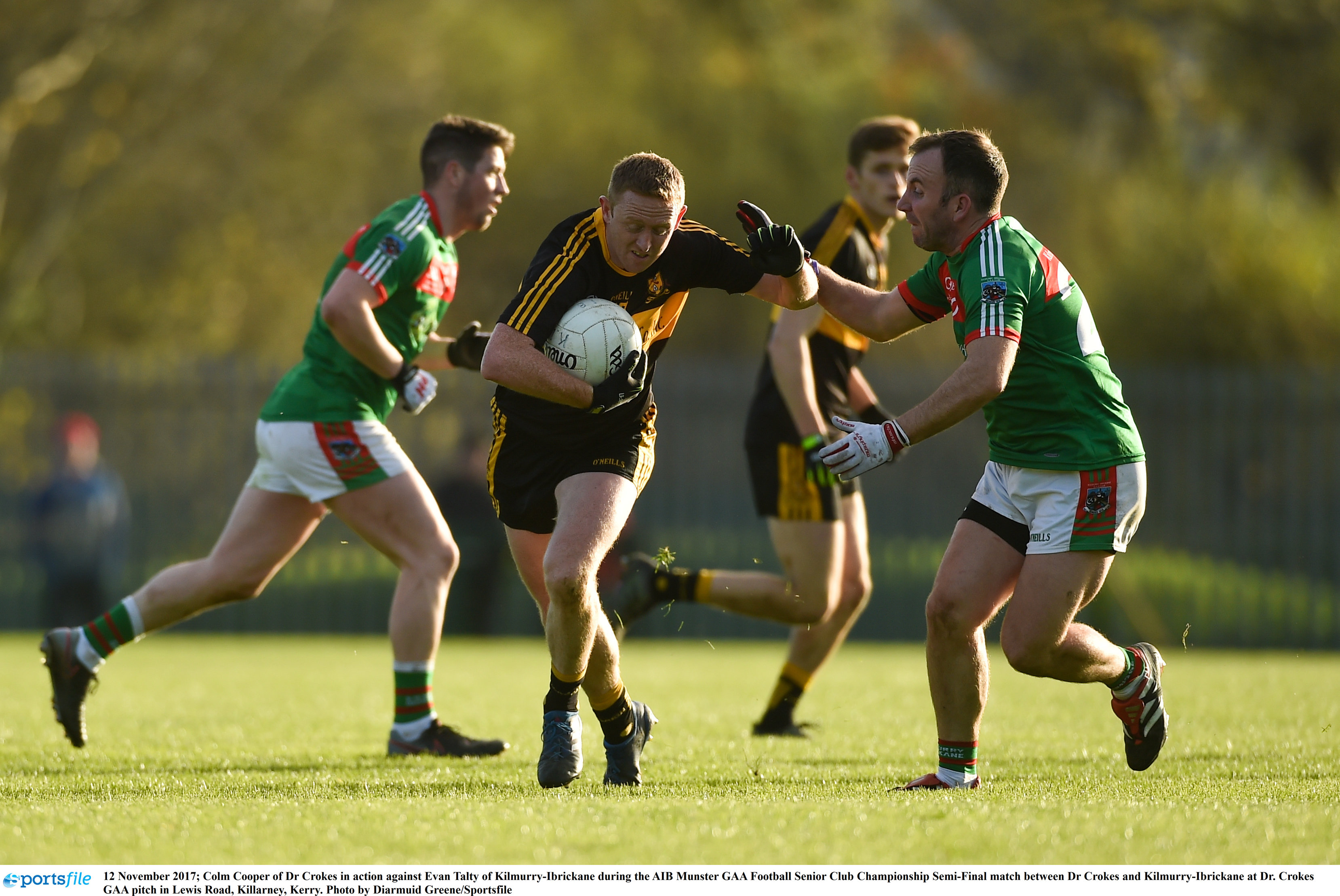 A goal by the excellent Johnny Buckley at the end of the first quarter set All Ireland Club Champions Dr Crokes on their way to a Munster Club Final meeting with Nemo Rangers on the weekend of November 26th next. The Killarney side were full value for their 15 point win but manager Pat O’Shea will be disappointed that some good goal chances went a-begging in wach half.

With Colm Cooper back in favour at corner forward Dr Crokes started this game as favourites but the early indications were that this would be a tough encounter at Lewis Rd as the sides swapped two points each in the first five minutes, however, with Buckley commanding the midfield sector the Crokes forwards got an abundant supply and they wasted no time in adding 3 points to their tally with Daithí Casey’s point from 50 yards being the pick of them. Kieran O’Laery also found the side netting from a tight angle but then in the 13th minute Johnny Buckley cut through the centre and gave Ian McInerney no chance to give Dr Crokes a 1-5 to 0-2 lead. Keelan Kissane pointed a free from close range for the visitors and Ambrose O’Donovan picked up a black card for the offence (replaced by Tony Brosnan) but it made little difference to Crokes as they rattled off 6 points on the trot from six different players and all the 6 Dr Crokes forwards were on the scoreboard by the break at which stage Dr Crokes led by 1-11 to 0-4. However, Martin McMahon had a great chance of a goal for the Clare side right on the whistle when he picked up a quick free from Mark McCarthy but shot agonisingly just over the bar.

With a 10 point lead there was going to be only one winner but in fairness to the Clare side they did not throw in the towel and got the first two scores on the restart with points from Mark McCarthy (who had a fine game at full forward with limited supply) and a Keelan Sexton “45”. Colm Cooper pointed two frees in reply before McCarthy got his third from play and Cooper and Tony Brosnan added two further points before a sequence of three block-downs in a row by the Dr Crokes defence finally ended with Dermot Coughlan slotting over a hard earned point. Dr Crokes were in that kind of mood and soon after Kieran O’Leary put the nail in the Kilmurray-Ibrickane coffin when, following a defensive mistake, he slotted the ball to the net from close range. The sound of silence that accompanied the score was testament to the fact that this game was well over as a contest with Dr Crokes leading by 2-15 to 0-8. There was time for Mark McCarthy to get his 4th for the visitors and the homeside cruised to the final as talk switched to the eminent meeting with Cork giants Nemo Rangers in the final in two weeks time.

The sides last met in the 2010 final in Mallow when Nemo triumphed by 1-15 to 1-13 on a frosty day when Gneeveguilla were defeated by St James of Galway in the All Ireland Intermediate semi final at the same venue.

Once Seán Micheál Ó Conchúir got his fist to an incisive pass from Eánna Ó Conchúir for a decisive goal for An Ghaeltacht 30 seconds into the second half there was only going to be one winner of this Intermediate Club Championship semi final at the Mallow GAA Complex today. The winners had got the better start and were 4 points to 1 ahead when Killian O’Connor goaled for Mallow to level the game at the end of the first quarter but the winners responded well to that setback and with the likes of Dara Ó Sé and Sean Micheál Ó Conchúir in fine scoring form  the Chorca Dhuibhne side led by 0-11 to 1-3 at the break.

Ó Conchúir’s alertness on the resumption put An Ghaeltacht on the road to victory and with nine different scorers they held off the Mallow challenge in that second half to set up a final meeting with St Senans of Limerick at a venue to be decided in two weeks time.

Brian Ó Beaglaoich and Marc Ó Sé were in control for the Kerry side in defence, Sean Ó Gairbhí (0-2) showed well in midfield and up front Dara Ó Sé (0-6), Seán Micheál Ó Conchúir (1-5) and Eanna Ó Conchúir, who had the better of Cork senior James Loughrey, were best for a well balanced Gaeltacht side.