You are here: Home/ News/ Causeway are Acorn Life Under 21 Hurling Champions 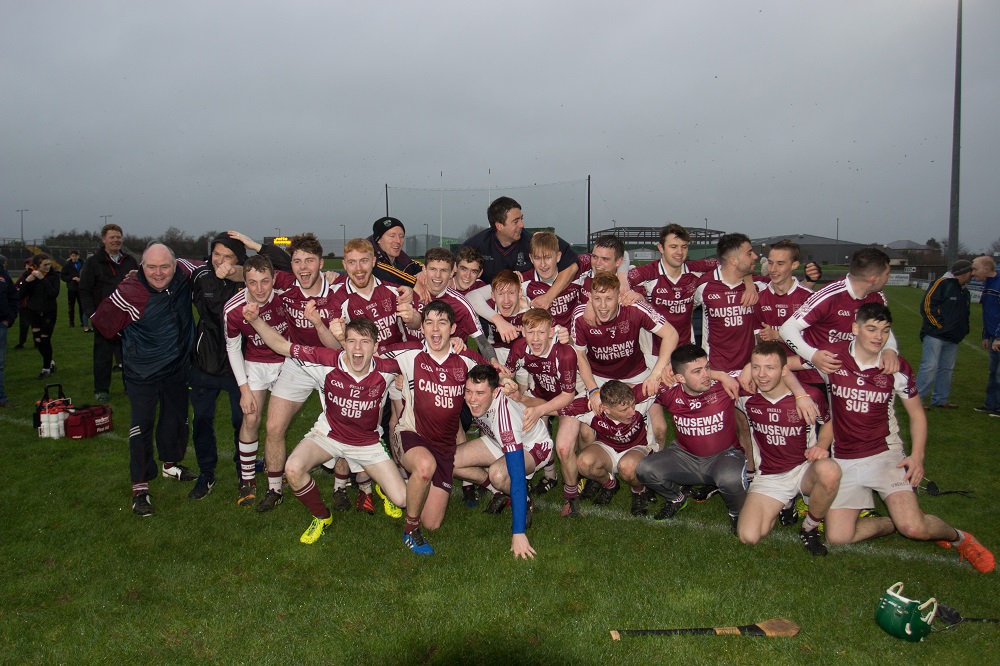 This Acorn Life Under 21 Hurling Championship Final at Austin Stack Park today was by no means a classic – the driving wind and rain that fell throughout saw to that – but it could not be faulted for sheer effort and excitement that saw the issue in doubt right down to the last minute of extra time.

Causeway had first use of the wind that blew into the Horan’s goal and Gary Carey for Causeway and Darragh O’Donoghue for Crotta swapped early points before Causeway began to make headway with four unanswered points, including one from play and another from a free by their captain Brandon Barrett, to lead by 5 points to 1 after 12 minutes. They did not score again for another 13 minutes but then again neither did Crotta who were bunching a lot up front. Barry Mahony had Crotta points in the 20th and 29th minutes, both from frees but in between Gary Carey pointed twice for the winners, one play and one free and Causeway led by 7 points to 3 at the break.

Given that they had to face the wind and the elements in the second half this lead did not look enough however Gary Carey extended the advantage to 5 points on the resumption. Darragh O’Donoghue and Barry Mahony (free) reduced the deficit to three points by the 38th minute but despite having the greater share of the possession the Kilflynn outfit found it hard to penetrate a defence superbly marshalled by Jason Diggins who got great help from the likes of Evan Murphy. Both sides wasted chances in 12 minutes of scoreless action, the best being when Causeway’s Brandon Barrett batted wide under pressure when the goal was gaping in front of him. The scores eventually began to come - albeit slowly - for Crotta and all from Barry Mahony who pointed a free, had another from a 60 yds free on the sideline in front of the stand and then tied the game with 8 minutes to go from play. In the remaining 10 minutes of play neither side could muster a winner as the game grew very scrappy and extra time was needed to separate the sides.

Causeway had the better of the first period of extra time with points by Gary Carey (free), Stephen Murphy and Joe Diggins to one in reply from a pointed free by Barry Mahony and the winners led by 11 points to 9 at the break.

Gary Carey pointed a free to extend the lead to three on the restart but then Dara Behan  had a great chance of a goal for Crotta but his close range shot went just over and with it went Crotta’s last chance of victory. Joe Diggins wrapped up the game when he latched on to a good pass through the middle and made ground before firing low to the net to finally kill off a youthful Crotta challenge a minute into added time.

After the game, Hurling Officer Ger McCarthy, himself a Causeway man, performed his last official function as Hurling Officer when presenting the Under 21 cup to winning captain Brandon Barrett and the Acorn Life Man of the match to Causeway’s Jason Diggins.