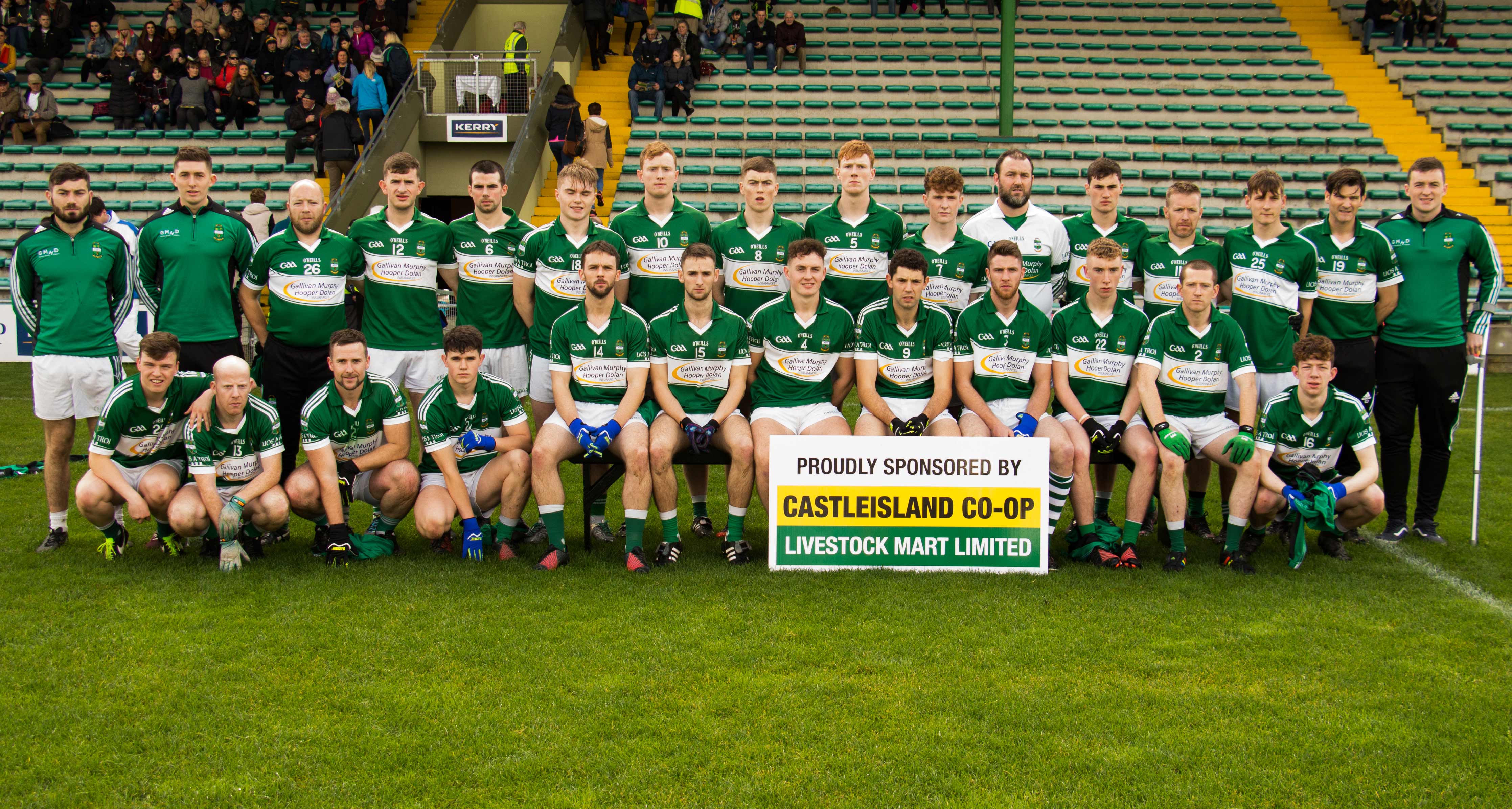 Listry are the Castleisland Mart Junior club football championship victors and are thus promoted to Intermediate status for the coming year after a thrilling encounter in Austin Stacks Park Tralee on Sunday afternoon.

Listry opened the scoring inside the first minute through a Joe Clifford point but Castlegregory responded through an Anton Kelliher free shortly after.

The best score of the first half came after 4 minutes as Ronan Buckley of Listry pointed just inside the 45 metre line beautifully off the ground.

The first goal chance fell to  Listry on the 5-minute mark as Jimmy O’Leary knocked the ball on to Derry Ahern who saw his shot saved by the feet of Shane Kenny in front of the Castlegregory net.

Within seconds Listry were left to rue the opportunity to go 4 points up as Alan Fitzgerald levelled the game from a free for Castlegreroy.

The first goal of the day came on 8 minutes as Brandon Hoare took the ball inside, hand passing it to Alan Fitzgerald on his inside who knocked the ball low into the bottom corner for Castlegregory.

A somewhat baron spell followed  the goal as we had to wait a whole 5 minutes for the next score which came from Ronan Buckley once more for Listry who pointed with wonderful technique from a free.  However, Castlegreory asserted their dominance on 16 minutes as a mix up between Counihan and Lehane in the Listry defence left Brandon Hoare the ball to tap into the empty net to put Castlegregory 5 points up.  Shortly after Ronan Buckley points from a 45 to keep Listry within touching distance, his 3rd score of the game.

Alan Fitzgerald with back to back points from frees within 60 seconds of each other gave Castlegregory a 6 point lead after 22 minutes.

Listry through Anthony Kennedy pulled it back to 5 before Anton Kelliher grabbed his second point of the afternoon to stretch the lead back to 6.

Liam Maunsell and Jimmy O’Grady extended the lead to 8 points for Castlegregory with  points from play, each almost identical to each other and either could’ve ended up in the back of the net.

The Castlegreory dominance continued as Anton Kelliher got his 3rd score of the day through a free to make it a 9-point lead going into half time at which stage the score was  Castlegregory 2-08 to 0-05 for Listry.

Listry came out flying after the interval and a point from Paul O’Donoghue was followed by a goal through Joe Clifford following a terrific goal-mouth scramble which quickly pulled Listry back into contention cutting the lead to 5 points.  After 38 minutes Alan Fitzgerald pointed for Castle, their first score of the second half and on the 41st minute both number 8’s traded frees to make the score 2-10 to 1-07 for Castle.

The teams traded scores once more as a Derry Ahern free followed by an Anton Kelliher point kept the lead at 6 points going into the 45th minute. Buckley pointed from a free for Listry to make it 5 points and that score sparked the comeback.

As a result of that Listry pointed free, a defensive error saw the ball kicked straight back to Listry and the ball found its way to Joe Clifford who dummied sending two players out of sight and buried the ball into the back of the net. Listry were well and truly back in this game.

On 55 minutes, Ronan Buckley got his 6th point of the day but his first from play to bring it back to a one point game and less than a minute later Joe Clifford passed to Gary O’Sullivan who pointed well for Listry to level the game.

With less than 60 seconds of normal time to go Ronan Buckley stepped up to a Listry 45 and under pressure, pointed it magnificently to give Listry the lead for the first time since the 8th minute!

Castlegregory threw the kitchen sink at their opposition in the 3 minutes of added time but to no avail and when the full-time whistle blew and Listry were crowned Junior club football champions!

After the game the Junior Championship Cup was presented to winning captain Jimmy O’Leary by Chairman of the County Committee Tim Murphy and the Castleisland Mart Man of the Match was presented to Listry’s Joe Clifford.

Subs: K. Courtney for K. Murphy, A. Sweeney for P. O’Donoghue, A. McCarthy for D. Clifford