You are here: Home/ News/ Dr Crokes do the simple things well! 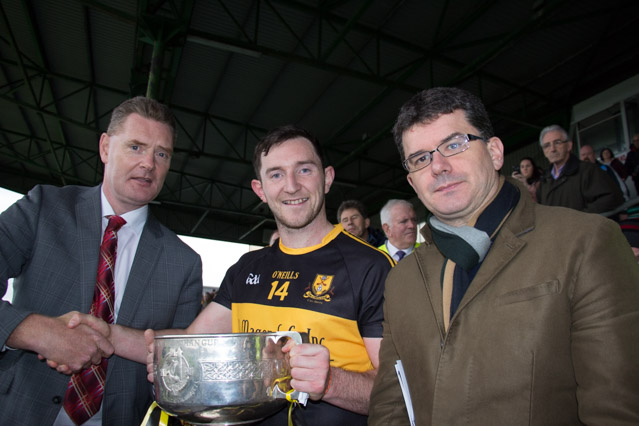 With 11 minutes left on the clock this game was in the melting pot and there for either side to lay claim to the famed Bishop Moynihan Cup. Bryan Sheehan’s point from play from 40 yds had brought the sides level and had brought the biggest cheer all afternoon  and with Dr Crokes down to 14 men following the sending off of Johnny Buckley four minutes earlier, it looked as if the tide was about to turn. Champions die hard they say however and Dr Crokes hit back with a pointed free from Daithí Casey who had been a central figure throughout for the Black and Amber side. Over the next five minutes or so South Kerry had three opportunities not alone to draw level but to take a winning lead – they spurned all three as Dr Crokes seemed to panic  slightly even losing their first kick-out from exemplary goalkeeper Shane Murphy. In a twinkling of an eye at the other end, Dr Crokes wrapped up another title when Jordan Kiely swivelled and pointed and then Kieran O’Leary cut in from the right and cool as a cucumber fisted over another point.

Those scores really summed up the difference between the sides; Dr Crokes were patience personified and made good use of any chance that came their way – South Kerry just seemed to have to work harder for their scores.

Ronan Hussey and Bryan Sheehan did cut the deficit to a single score thereafter as time ran out but O’Leary lofted over his fourth point to secure victory.

Dr Crokes had of course started without their talisman Colm Cooper and people may spend many a winter hour pouring over what difference the Gooch would have made had he been fully fit, but on the other side of the coin, Killian Young’s absence from the South Kerry setup was arguably even more severe and they also had to start without the influential Denis Daly and they lost his namesake Daniel early on to injury.

The game exploded into life from the throw-in with Bryan Sheehan, who had a fine game, finding Paul O’Donoghue who parted to Brendan O’Sullivan who somehow had got in behind the defence from the throw-in position but the Valentia man’s strike was excellently turned away for a “45” by Shane Murphy.

The champions responded to Sheehan’s converted  “45” with three points from the top drawer – two from Kieran O’Leary and another from Micheál Burns and this set the tone for some exceptional scores by both sides during the remainder of the game.  Tony Brosnan had a goal chance pushed over the bar and it was 5 to 3 after 15 minutes after an even opening quarter with the difference between the sides being that Dr Crokes were converting the greater share of scoring chances.

Padraig O’Sullivan saved a certain goal at the expense of a point soon after as it seemed that it was only a matter of time before Crokes would raise a green flag. Out of the blue when the goal came it came  at the other end when a defensive mistake handed a simple chance to Ian Galvin – even Shane Murphy could do nothing about his close range shot as Dr Crokes conceded their first goal of the competition.  The score could not have come at a more critical time for the South Kerrymen as the winners seemed to be in the act of pulling away at that stage.

Crokes were making hay around the centre from loose ball but South Kerry were improving in general play with  stand-in captain Conor O’Shea, Bryan Sheehan and a fine score from Paul O’Donoghue  leaving just a couple of points between the sides at the break 0-11 to 1-6. Incidentally there were six points kicked in as many minutes just before the break and all of them were exemplary scores with Micheál Burns, Tony Brosnan and Daithí Casey matching the scores by the South Kerry trio.

The second half started in a very similar fashion to the first with Shane Murphy getting down to his left to save well when Matthew O’Sullivan shot from just six yards out. Gavin White, afterwards named the Garveys Supervalu Man of the Match, had his best spell in the third quarter especially in an attacking mode  but when Bryan Sheehan’s point in the 37th minute left the minimum between the sides it was time to send for Colm Cooper who entered the fray along with Jordan Kiely.

Daithí Casey converted Dr Crokes’ first score from a free in the 42nd minute but Bryan Sheehan cancelled that out soon after before Johnny Buckley got his marching orders with a Black on top of a Yellow. Sheehan converted but as already stated it was Dr Crokes who grabbed the initiative on the scoreboard even though South Kerry enjoyed more of the hard won possession.

It’s a simple game and Dr Crokes do the simple things well.

After the game, Tim Murphy presented the Bishop Moynihan Cup to winning Dr Crokes captain Daithí Casey and Jim Garvey of Garveys Supervalu presented the Man of the Match to Gavin White of Dr Crokes who was the unanimous choice of the printed media correspondants  covering the game.