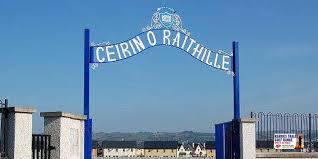 Kerins O’Rahillys have managed to retain their place in the Senior County Championship after a well earned five point win over Kilcummin in Austin Stack Park Tralee today.

Kilcummin managed to raise the white flag first as Brendan Kealy came up to put over a free just outside the “45”. One became two shortly after as Matt Keane gave Kilcummin the early advantage. Rahillys were wasteful in front of the posts and it took a Jack Savage free in the 8th minute to cut the deficit to one. Kilcummin restored the advantage after 18 minutes with Kevin McCarthy putting over outside the 21. With 24 minutes played Rahillys were awarded a penalty and  up stepped Jack Savage but the spot kick was saved brilliantly by Brendan Kealy who got down low to his right hand side to push the shot onto the post and managed to smother back possession. Rahillys managed to draw level with another free as Jack Savage made little error as we edged closer to the interval but the Tralee side were wasteful in that first half and could have held the lead had they bought their shooting boots.

Kevin McCarthy was not missinghowever and managed to run through the Rahillys defence and hit a low shot into the net, leaving it 1-04 to 0-03 after 28th minutes with a four point half time deficit looming for Rahillys. They needed something before the break to keep them alive and just 3 minutes after the McCarthy goal Rahillys were level as Barry John Keane goaled with a hard low shot and shortly after Jack Savage scored another free and it was all square at the interval; 1-04 to 1-04.

The second half proved more lively than the first as Kilcummin fired over two quickfire scores with Matt Keane and Kevin McCarthy pointing to give the Division 2 side the advantage.

Rahillys responded in great fashion as they got four quickfire unanswered points to nudge in front but Noel Duggan responded to keep his side in the hunt and trail by a point 1-8 to 1-7 by the 40th minute. Rahillys were playing with comfort in the second half and another three fast scores had them looking favourites to retain their championship status.

Kilcummin kept their necks in this contest hoping for a comeback with Brendan Kealy and Matt Keane adding again to the scoreboard but Rahillys still held firm.

Jack Savage and Kevin McCarthy exchanged frees and it was 1-12 to 1-10 with 7 minutes to go. Rahillys managed to deliver the killer blow late on however as Gavin O’Brien managed to hit the back of the net after he connected with a high ball into the square.