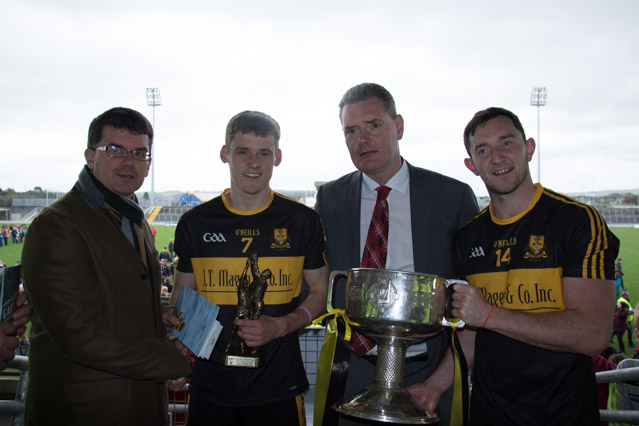 Fresh from their county final victory on Sunday last Dr Crokes will put their All Ireland Club title on the line when they travel to Clonmel on Sunday next to take on Clonmel Commercials in the Munster senior club quarter final (2pm). While it would be a huge surprise were the Kerry side to lose their crown, the wearers of the black and amber will need little reminding of the giant killing act by the Tipperary side when they rocked Nemo Rangers with a late, late, goal to clinch the Munster title in 2015. Still this Kerry side you would think are in a different league and they will be overwhelming favourites to go on to a semi final meeting against Clondegad or Kilmurray-Ibrickane of Clare a game that would be played in Killarney.

Dr Crokes have won their 12th Garveys SuperValu Senior County Championship title after a narrow two point win over South Kerry in Austin Stack’s Park Tralee this afternoon. Crokes now tie top of the Roll of Honour together with Laune Rangers and Austin Stacks all with 12 as the most successful county championship sides. The Bishop Moynihan Cup now visits Lewis Road for the 6th time in 8 years.

The game got off to a fast-paced start as Paul O’Donoghue sent a great pass over the defence to find Brendan O’Sullivan but his shot was saved by Shane Murphy who pulled off a fantastic save to deny the midfield man. After Murphy’s save Bryan Sheehan stepped up to put a “45” over with all the action coming in the 1st minute.

Dr Crokes slowly managed to get a foot in the game as Kieran O’Leary put over two points from play, giving Crokes a one point lead after 8 minutes. Micheál Burns extended Crokes lead with a well taken solo effort ending with a great spin against his marker and sending the ball over the bar.

It was nip and tuck in the early stages and with 14 minutes played Crokes almost raised the green flag but Brian Sugrue made a fantastic block to send Tony Brosnan’s effort over the bar.  Sugrue deserved credit for that  save but Padraig O’Sullivan deserved even more as he made a stunning one handed save to deny Daithi Casey.

Crokes were breathing down the South Kerry necks and Gavin White managed to run up and calmly put over to score. South Kerry were searching for an opening and were gifted an opportunity as Mike Moloney gave away possession and Ian Galvin managed to run through and drive the ball under Shane Murphy low into the bottom corner in the 18th minute.

Ian Galvin’s effort was the first goal conceded by Crokes this championship year, however they managed two quick scores after the defensive blunder to maintain the advantage.

Both sides exchanged scores just before the half time break as Crokes managed to hold a two point, the half time score being South Kerry 0-11 to 1-06 for Dr Crokes.

South Kerry came out after the break and looked to try and sneak the early advantage as Matthew O’Sullivan broke free and hit a low driven shot that was saved spectacularly again by Shane Murphy, his second such save of of the afternoon.

Micheál Burns managed to point before Paul Donoghue and Bryan Sheehan managed to keep South Kerry in the match as they trailed by a point.

Daithí Casey and Bryan Sheehan both exchanged frees as the match turned into an edge of your seat affair as the underdogs South Kerry were putting Crokes to the sword but the winners still led by 0-13 to 1-9 at the three quarter stage.

Johnny Buckley was sent off midway through the half after he was shown a second yellow card for his troubles. Once more after the card it was Daithí Casey and Bryan Sheehan both exchanging frees again as the 14 men of Crokes were hanging on.

The All Ireland champions showed their guile in the final stages of the half as Jordan Kiely and Kieran O’Leary pointed to put Crokes three in front.

South Kerry looked to fight back in the later stages of the half with Ronan Hussey and Bryan Sheehan pointing cutting the deficit to just a point as we went into three minutes of added time. Crokes slowed the pace down eventually carved an opening to give Kieran O’Leary his fourth of the afternoon. Dr Crokes managed to hold on to retain the Bishop Moynihan Cup.