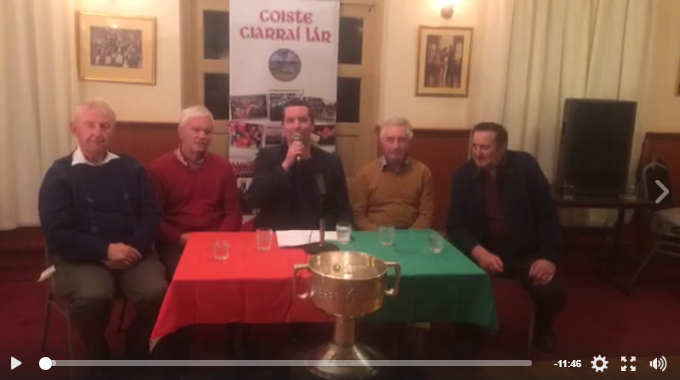 Mike & Kathleen O'Shea were excellent hosts and everyone had an enjoyable night.

The Laune Rangers music group opened the show and Maurice Leahy had a look back at the County Hurling Final draw and a look forward to the replay between Lixnaw and Ballyduff.

After a short technical hitch they resumed their discussion.

Colm Kelly and Pat O'Shea had a discussion going through the history of the Mid Kerry Board.

Then it was time to introduce the 1967 Team.

After a slight interruption the chat continued and the Keel Ballad group provided the entertainment.

Brian Hurley introduced the 1992 team of twenty five years ago.

Liam Evans from Keel was there to sing out and close.

The Final Section saw and interview with the Chairman Mike Sayers.

Sean O'Sullivan had a preview of the Minor County Final between East Kerry and St Brendans.

He also spoke on his recent win with Cromane v Moyvane in the County Novice Final.