You are here: Home/ News/ Ballyduff- Co. Champions for the 25th Time! 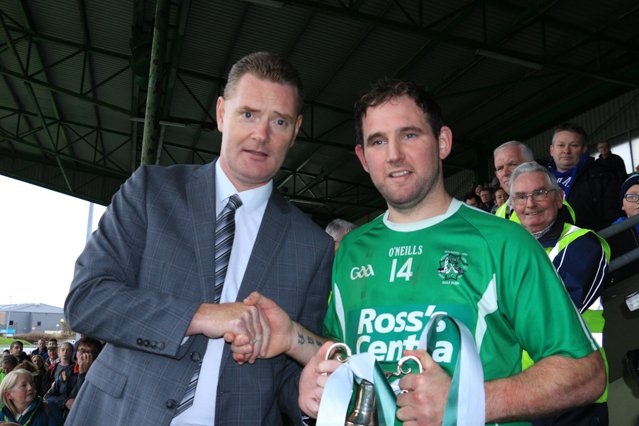 Ballyduff are Co. Champions for the 25th Time!

By Samuel Mansfield and Diarmuid Kearney

Ballyduff are the Garvey’s Supervalu Senior County Hurling Champions for 2017 after the Duffers won by 3 points in a thrilling replay in Austin Stack Park, Tralee on Sunday afternoon.

The first chance of the game was given to Shane Conway but unlike last week, Conway pulled it wide. The miss was punished very quickly as a minute later, Liam Boyle drove a high ball into the square from halfway and Aidan Boyle, who had started in at full forward, caught it well and struck it low beyond Martin Stackpoole into the back of the net to give Ballyduff an early lead.

Lixnaw responded to the goal within a minute through Ricky Heffernan who pointed from play and the quickfire start to the game continued as Ballyduff pointed through Daniel O’Carroll after 5 minutes to retake that 3-point lead. Lixnaw pointed once more from play through Brendan Brosnan to reduce the deficit once more.

We finally got a few minutes to breathe after the lightning start, however, with ten minutes gone Ballyduff displayed the long ball tactic once more as a high ball knocked in towards Aidan Boyle resulted in a good Stackpoole save however Aidan was quick to pounce on it and knocked the rebound into the bottom right hand corner of the net, his second goal of the game coming after just ten minutes!

Ballyduff’s amazing start continued as all 3 Boyle brothers combined in midfield before Liam knocked one over the bar from roughly half way out and  Mikey Boyle continued this by adding his first of the game. Lixnaw kept in touch as a Brendan Brosnan “65” and a John Buckley point reduced the deficit back to 5 points.

Lixnaw were back in the game shortly afterwards as Heffernan grabbed the sliotar in midfield and burst through the defence before slicing the ball off his hurl however it somehow managed to roll past P.J. O’Gorman to the Ballyduff net. Game on once more.

Lixnaw carried this momentum forward as Michael Conway added 2 frees from the 65 and 30 metre marks respectively to level the game with 20 mins on the clock.

The Lixnaw comeback was short lived however as Jack Goulding got his first point of the game to put Ballyduff one point up. Michael Conway however added another free to equalise once more. End to end stuff!

Lixnaw took the lead after 22 minutes for the first time as Buckley got his second of the afternoon. This score for score theme continues as Daniel O’Carroll got his second score to level the game again and Aidan Boyle got his first point of the game before Padraig finally opened his tally after his wonderful display last week to give the Duffers a 2 point lead.

Once more Michael Conway pointed to keep Lixnaw within touching distance but just afterwards as the minute of added time was announced another long ball was sent in to Aidan Boyle who caught well and smashed it into the top corner to complete a first half hat-trick!

Michael Conway pointed once more from a free just before the whistle to make it a 3 point game at Half Time. Ballyduff 3:07 1:10 Lixnaw

The second half opened with a similar pattern as Shane Conway opened the second half scoring to reduce the Ballyduff lead once more. James Flaherty, a half time substitute popped up to make it a one point game shortly after.

The 34th minute of the game saw another Ballyduff goal opportunity however Daniel O’Carroll’s effort was well saved down low by Martin Stackpoole who pushed it wide for a “65”, subsequently missed by Padraig Boyle.

Just a minute later Ballyduff did manage to get their 4th goal of the game as Mikey Boyle burst through on goal, miss hit but the sliotar fell to brother Aidan, who gave it back to Mikey who smashed the ball past Stackpoole. Ballyduff once more lead by 4 points

That lead was extended to 5 quickly after as Aidan Boyle was dragged down and Padraig pointed the resulting free. Another Conway free just before Jack O’Sullivan pointed for Ballyduff kept this tit for tat scoring going in the second half.

Michael Conway pointed two morefree’s in the 41st and 42nd minute to make it a 3 point game once more. Padraig Boyle made it 4 once more from a free in after another long ball towards Aidan Boyle.

45 minutes in. Shane Conway got through on goal and was taken down by Padraig O’Grady who was given his marching orders after a second yellow card. Michael Conway pointed the resulting free.

Daniel O’Carroll grabbed his 3rd point of the day after sloppy play in midfield by Lixnaw. Conway made the gap 3 quickly after from another free in. Ballyduff fouling and Conway pointing seemed to be the theme of the day.

Back down the other end Padraig Boyle got his 4th score from frees to once more keep the Ballyduff scoreboard ticking. Boyle was then blocked well by Shane Conway who sprinted up the other side of the pitch to make it a 3 point game….again.

Brendan Brosnan got his second score from a “65” to reduce the Duffers lead to 2 points going into the 3 minutes of added time.

In the 61st minute Gary O’Brien, a second half sub got under a high ball and offloaded to Daniel O’Carroll who pointed to a rapturous roar from the Ballyduff supporters who had travelled to Tralee.

Championship replays, more often than not, fail to outshine a good drawn encounter but this Garveys Supervalu Senior Hurling Championship Final Replay proved to be the exception as Ballyduff claimed their 25th title at a well attended Austin Stack Park (Att 2,922) this afternoon. It is always unfair to pick out one individual from a winning team and heap all the praise on that lone recipient of a Man of the Match or such an accolade so on this occasion we can justifiably pick a group of brothers – four in all! The Boyle brothers from Ballyduff stamped their authority on this game from as early as the third minute when Liam Boyle’s long delivery was caught superbly by Aidan and finished to the net and if Padraig Boyle was Man of the Match with 2-11 in the drawn game then this time round it was Aidan’s turn.

You did not have to have any coaching awards to figure out that the long ball into the Lixnaw goalmouth was a tactic that Ballyduff were going to employ time and time again. Aidan got his second major in the 10th minute when brother, Padraig’s shot was well saved by excellent Lixnaw netminder Martin Stackpoole and just for good measure Liam and Mikey added points.

At this stage, 2-3 to 0-2 ahead, it looked as if Ballyduff were going to have it all their own way but Lixnaw, who were forced to line out without the influential John Griffin due to a thumb injury, came back strongly and outscored their rivals by 1-6 to 0-1 in the next 13 minutes with the goal coming after a fine Ricky Heffernan run in the 17th minute. Lixnaw were running at their opponents and drawing frees – the free count in that first half was 10 to 1 in favour of Lixnaw – and Ballyduff were living off that early brace of goals but they did strike back for three points between the 25th and the 28th minutes to double their points tally. When Aidan Boyle completed his hat-trick on the call of half time- yet again from another high delivery – Ballyduff were a goal to the good at the break.

Lixnaw started brightly in the second period with Shane Conway and sub James Flaherty – who brought an improvement up front – pointing but then Mike Boyle set off on a great run, got a return pass from Aidan and the ball was in the Lixnaw net for a 4th time. It was tit for tat thereafter with Lixnaw threatening to score a goal on a few occasions but never managing to do so to ignite their challenge. Mikey Boyle was by now sitting in front of his defence and playing a sweeper role to perfection and he needed to given that they were down to 14 men from the 45th minute after Padraig O’Grady received a second yellow from no nonsense referee Cathal McAllister. With just three points between the sides and with a numerical advantage Lixnaw seemed to have Ballyduff there for the taking but while Brendan Brosnan’s “65” in the 60th minute reduced the gap to 2 points, they never looked like overhauling their neighbours and Daniel O’Carroll picked off his 4th point of the afternoon to cap a fine display by himself and his team.

And so the Neilus Flynn Cup was presented to winning captain Mikey Boyle by the Chairman of the County Committee Tim Murphy while Timmy Moynihan, representing Garvey’s Supervalu, presented the man of the Match award and Skelligs Hotel Voucher to Ballyduff’s Aidan Boyle.

Storm Ophelia will hardly dampen the Bonfires in Ballyduff tonight!!