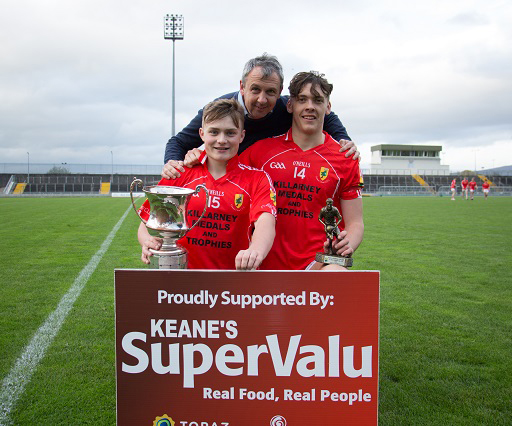 East Kerry are Keanes Supervalu Killorglin County Minor Football Champions for the third time in 5 years following a narrow two point victory over a gallant St Brendans side at Austin Stack Park today. The winners, who had a commanding 7 points lead at the break thanks to a dominant second quarter, had to withstand tremendous pressure from the underdogs in the second half and St Brendans were decidedly unlucky not to have at least earned a draw following a tremendous fightback.

With a host of All Ireland Minor and Colleges medal holders on board, East Kerry were odds on to win this final and with something to spare , and win it they did but they got the fright of their lives from a St Brendans side that refused to throw in the towel.

Brendans it was who got the better start and Eoin Greaney from a free and play had them two up before Brian Friel opened East Kerry’s account in the 4th minute.  Marc Kelliher was called on to make two fine saves in the East Kerry goal as Mikey Kelliher set up Jason Mortimer and then had a shot of his own saved during a good spell for the Brendans. David Clifford got East Kerry going with points from a free and play and then he did all the spadework before setting up Ian Roche for a goal which he punched to the net after Clifford crossed across the square in the 14th minute. Mikey Kelliher, who was very influential in the first half, replied with a point for Brendans but with Brian Friel dominating the centre, East Kerry forwards were getting a fine supply of ball and they reeled off 5 points in a three minute spell to go 1-8 to 0-3 clear by the 21st minute. Sean Donnellan and Eoin Greaney pointed either side of a Sean Doherty point for East Kerry before Cian Gammell put Ian Roche through for his second goal in the 27th minute. Brendans had the perfect response however when straight from the kickout Fergal Barry set up Eoghan McElligott for a goal at the other end. Dara Devine and Sean O’Leary swapped points but at 2-10 to 1-6 the odds certainly favoured East Kerry at the break.

With both Diarmuid O’Connor and Eoghan McElligott thundering into the game at midfield, St Brendans set about reducing the deficit with some gusto. Eoin Greaney made it a 5 point gap from play and free inside two minutes of the new half but Brian O’Regan had to make two fine saves either side of a Clifford free to keep St Brendans in the game. Still the underdogs were now dominating proceedings and after Dara Devine converted three frees on the bounce in as many minutes, there was just a single score between the sides 2-11 to 1-11 with 41 mins gone.

With midfield possession drying up David Clifford was forced to move out to centre forward and he picked off a badly needed point for his side in the 42nd minute. Mikey Kelliher replied for St Brendans and then Clifford set up Sean Doherty but the Glenflesk man elected to shoot when a pass to an unmarked colleague would have been a better option – O’Regan mad another fine save and when Greaney pointed a free it was a 2 point game, 2-12 to 1-13 with 10 to go. Cian O’Shea, again after good work by Clifford, increased the gap to three again and O’Regan in the St Brendans goal had another fine save from Darragh Lyne to keep his side in the hunt. East Kerry’s obsession with goals almost cost them as Eoghan McElligott and Dara Devine (Free) reduced the margin to a point as time ticked over to the mandatory 4 minutes of added time. However, they were let off the hook by a Brendans side who had not kicked their first wide until the 47th minute, but as time ebbed they were off target twice from reasonable distances and angles and after he had a great chance to seal the issue with a blistering shot that went just wide of the butt of the post, David Clifford got the insurance score for East Kerry in the 64th minute.

So, while they certainly deserved their win, East Kerry will in time look back on this game as one that could very easily have gone the other way. On this occasion, Clifford certainly got a run for his money for the Man of the Match award from the likes of comrades Paul O’Shea and Brian Friel (first half) while the losers had outstanding displays from goal keeper Brian O’Regan, Niall O’Mahony who did as well as anyone has done on Clifford, and midfielders Diarmuid O’Connor and Eoghan McElligott.