Ballyduff and Lixnaw to do it all over again next Sunday

You are here: Home/ News/ Ballyduff and Lixnaw to do it all over again next Sunday

Ballyduff and Lixnaw to do it all over again next Sunday 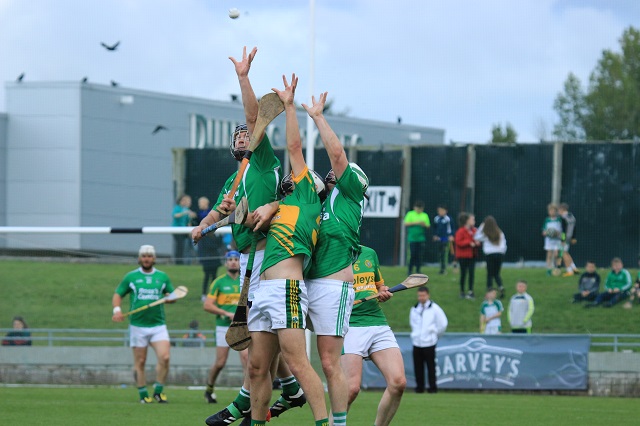 The 2017 Garvey’s SuperValu Kerry County Senior Hurling Championship will be decided on another day after Ballyduff and Lixnaw played out an entertaining draw in Austin Stack Park in Tralee this afternoon.

It took just 15 seconds for the first score of the final as Padraig Boyle created an opening on the right and managed to score a fantastic point for Ballyduff. Just 30 seconds later Lixnaw were back in this game as John Griffin broke through to level proceedings. After the breathless start it looked like we were down for an epic encounter and as the clock struck the second minute so did Lixnaw’s Shane Conway, who goaled on the second attempt after his first attempt was well saved by PJ O’Gorman.

Ballyduff were looking to respond quickly after the early set back and two points from Padraig Boyle had the deficit reduced to one point before Shane Conway added a free to leave the score 1-2 to 0-03 with just over 10 minutes played. The referee was called into action in the 12th minute as he awarded a penalty for Ballyduff as Mikey Boyle was dragged down in the area and his brother Podge stepped up and calmly slotted home to give Ballyduff a narrow one point advantage.

Neither side gave an inch midway through the half with the game nip and tuck, but it was Lixnaw who were ahead after 24 minutes as Shane Conway managed to add to the scoreboard putting his side a point in front. Lixnaw lead late on in the half but a fantastic free from Padraig Boyle in the 32nd minute from 60 plus yards out made sure neither side had an advantage at the break as the scoreboard read 1-08 to 1-08.

From the restart Lixnaw captain John Buckley pointed from play as they looked to try build an early lead and preserve it the best they could.

Padraig Boyle was having a superb game for the Duffers as he chipped away with 1-7 in the first half and was a key asset in the Ballyduff attack, Boyle would score two points before combining with brother Aidan and sent a low shot which Linxaw keeper Martin Stackpoole saved but it just managed to deflect and go over the line.

After Boyle’s second Lixnaw again needed to find a way back into the game to keep their title hopes alive and in the 41st minute the teams were level as scores from Shane Conway, Raymond Galvin and the last from Jeremy McKenna gave the Lixnaw supporters renewed hope that they could walk away as Champions.

Kerry hurling is alive and well as the remaining 15 minutes were an enthralling classic and you never knew who was going to be heading away with the cup. Ballyduff were  just edging it by a point on the 50th minute as the ever present Padraig Boyle sent over another long range free that sent the duffers into a frenzy and they seemed to have sealed it In the 53rd minute as Jack Goulding and Boyle both pointed giving signs that the curse over Lixnaw was still present as the Duffers looked to be in top gear.

Brendan Brosnan reduced the lead to two points in the 56th minute as the heart rates in Austin Stack Park started to palpitate off the charts, with Lixnaw praying for late drama.

Three minutes was added on from the sideline as Lixnaw were pressing to try and claim a replay and they could have won the game with a late goal after PJ O’Gorman denied the original shot which  rebounded and  smacked the inside of the post and then managed to roll across the end line for a 65 which Shane Conway converted.

Deep into stoppage time both sides were battling for the win and Lixnaw got their chance to level matters when Shane Conway stepped up as cool as ice and put over the sideline cut to send the game to a replay.

Replay set for next Sunday October 15th in Austin Stack Park in Tralee.

A draw was a fitting Result

For the brilliantly executed equaliser alone, a draw was a fitting result to this high quality and exciting Garveys Supervalu senior hurling championship final at Austin Stack Park today. Level at half time, level at full time, and a few more time in between, these two sides threw everything at each other throughout an enthralling 60 minutes or so of hurling and Kerry senior Hurling manager Fintan O’Connor must have been impressed with what he saw as he kept a watching brief.

Shane Conway’s goal early on must have given Lixnaw a great boost but they were unable to build on that score as Padraig Boyle simply took over for Ballyduff. Boyle had three points and converted a penalty as Ballyduff surged 1-5 to 1-3 ahead by the 20th minute. At that stage there seemed to be just one team in it but in fairness to Lixnaw they never lost their composure and soon levelled it up in a good spell for the green and gold side. They even went ahead after good points from the two Conways but at the break it was back to level pegging and Lixnaw must have been the happier side going in given that they had withstood tremendous Ballyduff pressure.

It was the Padraig Boyle show once again at the start of the second half as he rattled off 1-2 - the goal coming after a quick-silver pass from brother Aidan in the3rd minute of the half. To their credit, Lixnaw’s response was instant and they hit four points in a seven minute spell to tie the game by the 42nd minute; a classic Shane Conway point from the wing being the highlight. In hindsight, a point-blank save by Martin Stackpoole five minutes later probably kept Lixnaw in the tie and it was still level with ten to go. Lixnaw lost their shape for a while and had gone defensive by this stage and anything cleared down field was being returned with interest. When Boyle pointed two placed balls from distance and Goulding added a trade mark point from the wing on the run the writing seemed to be on the wall for Lixnaw.

The ribbons were not on the Cup yet however. Shane Conway had a good point and then Michael Conway hit a pile driver off the butt of the post with the rebound being whipped against the other post before going out for a “65” which Shane Conway pointed. With time up, the recently named Under 21  “B” Hurler of the year planted a sideline cut straight over the black spot to force a replay and in truth few could have quibbled with the result.

Replay on Sunday next: The replay of the Garveys Supervalu Senior Hurling Championship final will be played in Austin Stack Park on Sunday next at a time to be decided by the CCC at it’s meeting on Monday night.