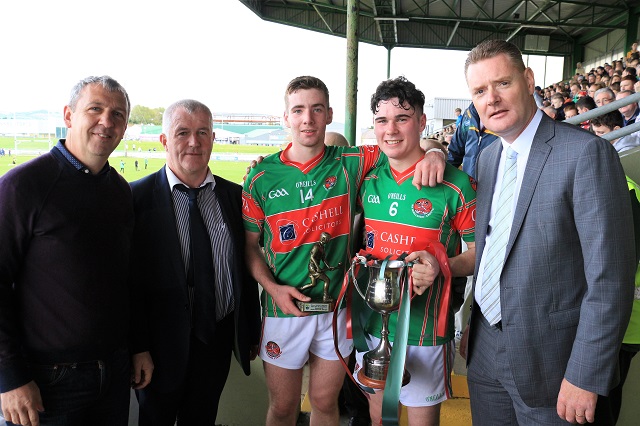 Crotta O’Neills have won the 2017 Keane’s Supervalu Killorglin County Minor Hurling Championship Final after defeating Abbeydorney/Parnells in a narrow one point margin in Austin Stack Park Tralee this afternoon. Man of the Match Barry Mahony helped his side to victory with a personal tally of 10 points as Crotta are now back to back Minor Champions.

Crotta needed a major comeback in the early stages and full forward Barry Mahony stepped up to score six points in succession, one from play,  to give his side a three point advantage after 14 minutes played.

Adam Maunsell cut the deficit down to two for Abbeydorney/Parnells before Barry Mahony put over another point to increase the lead to three midway through the half.

A comeback was on for Abbeydorney/Parnells as Adam Maunsell reduced the lead by two points as we edged closer to the interval but  Crotta still held a firm two point lead.

Crotta’s fine first half performance was capped off by two late points as James Sheehan pointed before Donal Hunt barged his way through the defence and unleashed a powerful shot that flew over the crossbar just missing the net. Michael Slattery shot just wide for O@dorney/Parnells but Crotta managed to hold on to a four point margin with the score reading 0-10 to 0-06 at the break.

The second half began like the first as Abbeydorney/Parnells opened proceedings again with Adam Maunsell pointing a free.

It did not take long in the early stages of the half for Crotta to show their dominance again as Aodhan Behan and Barry Mahony both added to the scoreboard giving them a commanding five point lead, with ten minutes to go.  Mahony’s point was one of the best all afternoon scoring a massive free from just inside his own 65.

The second half in general showed hurling in the county in a good light as neither side gave an inch to the other to crown a clear winner.  Barry Mahony and Adam Maunsell both exchanged scores before Darragh Reen had his side breathing down the necks of Crotta with just minutes to go as the slender two point lead remained.

In the dying embers of the game we needed something special and we got that, Michael Slattery provided a moment of sheer brilliance as he ran at the heart of the Crotta defence bounced the sliotar off the ground and then side stepped an onrushing defender before firing the sliotar high into the net to put Abbeydorney in front. When Adam Maunsell fired over a sideline ball to give Abbeydorney/Parnells a two point lead it looked certain they would prevail as champions but Donal Hunt would have the final say for Crotta as he gathered a long high ball after a defensive mistake and managed to fire past the keeper, shattering Abbeydorney/Parnell hearts In the process to give Crotta their second County Minor title in-a-row with a 1-14 to 1-13 victory.

Subs: A. McKenna for A. Behan