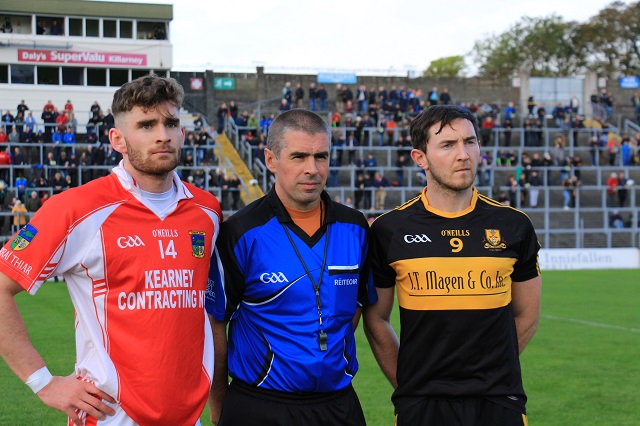 Dr Crokes have advanced to yet another County final after a comprehensive 14 point win over West Kerry in the second game at Fitzgerald Stadium this afternoon.

West Kerry opened proceedings within 30 seconds as Jason Hickson managed to find space and pointed just inside the 21 yard line but beyond that opening score Dr Crokes were in cruise control for most of the opening half following their first score in the 2nd minute when Johnny Buckley pointed from play.

After a 6 minute scoring hiatus Dr Crokes laid their stamp on proceedings as Tony Brosnan pointed before Daithi Casey goaled after a well worked Crokes attack that started from a Colm Cooper free and ended with Tony Brosnan passing to Casey who made no mistake to score.

With 11 minutes gone West Kerry managed two quick-fire back to back scores with Eanna Ó Conchúir and Dara Ó Sé both adding to the scoreboard. Crokes were still comfortable in this game and a point from the old reliable Colm Cooper extended their lead by 3 midway through the opening half.

With 17 minutes  played Dr Crokes were dogged in their pursuit of another County Final as Brian Looney and Gavin White both pointed as Dara Ó Sé managed to get another point for West Kerry in between to try and ignite a comeback.

On 20 minutes  the game could easily have been over as a contest as Daithi Casey managed to run past the West Kerry defence but his high shot cannoned off the crossbar.

Colm Cooper was having an amazing opening half for Crokes and managed two quick fire points and sent in a lovely ball for Tony Brosnan to add to proceedings, however the red mist descended on the West Kerry challenge late in the half when  Jason Hickson was shown a second yellow for a high challenge just before the interval at which stage the scoreboard read  1-09 to  0-05.

Dr Crokes made the dream start to the second half as Colm Cooper cheekily goaled from a quick free which whad been brought forward  for dissent.  The Crokes man made short work of the free spotting just one man guarding the line and he curled the ball pastMac an tSaoir.

West Kerry were doing everything to give a spirited comeback in this game as Seán Micheál Ó Conchúir managed two quick fire points but it only looked like a consolation effort on the scoreboard.

Dr Crokes had Fionn Fitzgerald and Michael Moloney both Black Carded as the half progressed but it had very little effect to the game as the Killarney side managed a 3rd goal in the 56th minute when Paul Clarke fisted the ball to the net from a great pass by Tony Brosnan,

West Kerry’s day went from bad to worse late on as Jordan Kiely managed two late goals to kill the game off and Crokes now advance to the final against South Kerry on October 22nd.

All Ireland Champions show their mettle

It was always going to be a long shot to have the All Ireland champions dethroned in their own back yard. The difference between a tried and trusted outfit such as Dr Crokes, and a youthful divisional side such as West Kerry was clear to see from a very early stage. Even allowing for the fact that the Chorca Dhuibhne side were backboned by 12 players from the one club, realistically they were never going to be a match for the Killarney side. It must be said that they did struggle on manfully and even when a man down, twenty minutes into the second half the deficit was still seven points, same as it was at the break.

It must have been demoralising for the West Kerry side to be reduced to 14 men on the stroke of half time given that they had performed reasonably well to that point being just a goal adrift at the end of the first quarter. But then Dr Crokes kicked on with five points from play and were well within themselves leading by 1-9 to 0-5 at the break.

The second half started with that audacious goal from Colm Cooper though it was poor defending of the highest order by the West Kerry defence to leave Tomá Mac an tSaoir stranded on his own with a goal poacher such as Cooper around. West Kerry strove manfully with Eanna Ó Conchúir and Sean Mhicil Ó Conchúir outstanding and they outscored the champions by 6 points to 3 during the next 20 minutes. However, the impetus from fresh blood off the bench from Dr Crokes and the defending while a man down combined to see the flood gates open and Dr Crokes finished with a flourish with their subs contributing 3 goals in the final five minutes or so.

They now go on to meet their old rivals South Kerry in the final with their place in the Munster Club Championship already guaranteed regardless of the result on December 22nd. 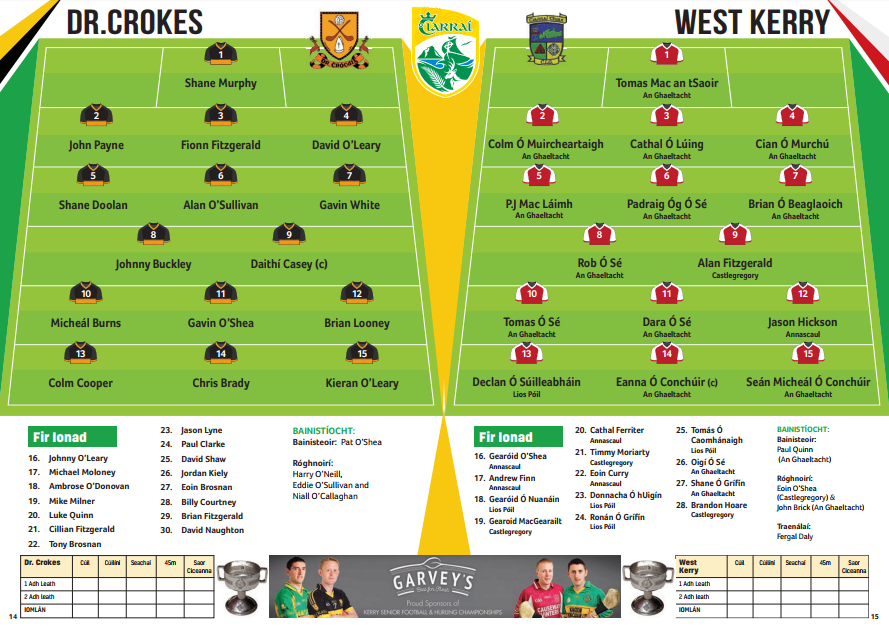