You are here: Home/ News/ South Kerry Leave it late to qualify for Co Final 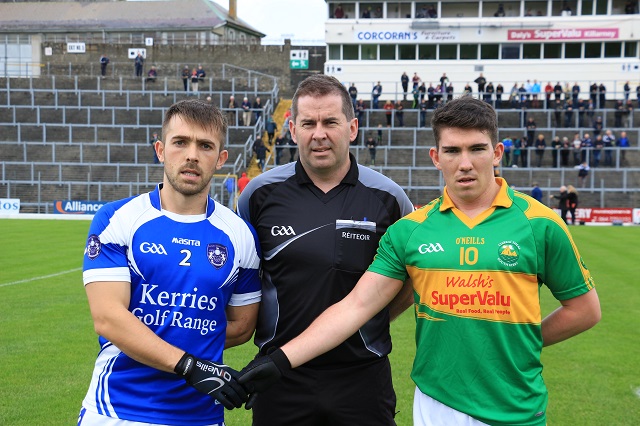 South Kerry are through to the County Championship Final after a hard fought one point win over Kerins O’Rahillys  played in Fitzgerald’s Stadium this afternoon.

After a very slow start, it took 6 minutes for the first score of the afternoon, Bryan Sheehan fisted over a point after a defensive error from the Rahillys kick out.  Rahillys found it tough early on as just a minute later Barry John Keane missed an easy free just outside the 21 yard line.

With 9 minutes played Rahillys were gifted their chance as they were awarded a penalty by referee Eddie Walsh as Graham O’Sullivan brought Padraig Griffin to the floor and Jack Savage stepped up and calmly dispatched the spot kick past Padraig O’Sullivan.

South Kerry almost had a goal of their own in the 13th minute but a double save from Gary Kissane and Karl Mullins denied Ronan Hussey from raising the green flag.

Midway through the half Rahillys extended their lead by 2 points after John Ferguson and Barry John Keane both pointed before Matthew O’Sullivan pointed in reply.

Rahilly's started the second half on top yet again as Jack Savage pointed a free and Tommy Begley managed to get a point to extend the lead to 3 points.

Bryan Sheehan had a great chance to goal on 45 as he bore down on goal and had his chance blocked on the line by Rahillys captain Danny O’ Sullivan.

Rahillys may rue the kick out strategy following the defeat as a second kick out error cost them dear as Daniel Daly collected the loose ball and managed to point levelling the game.

It was edge of your seat stuff late on as South Kerry went ahead in the 55thh minute through an Ian Galvin free before Jack Savage levelled for Rahillys a minute later.

Wasteful South Kerry were the better side on the day

In the end, South Kerry very nearly paid for their wastefulness in front of goal. Barry John Keane, who had just reduced the deficit to the minimum with a free from 55 yards in the 61st minute, was presented with a second chance from the same position following the kick-out. Had his shot sailed over for the equaliser  instead of falling short then South Kerry would surely have been kicking themselves facing into a replay after dominating the game for long periods.

Rahillys did not have their first attack of note until the 7th minute yet South Kerry had only a point from Eir Sport Man of the Match Bryan Sheehan to show for their troubles in that time. The goal from the penalty, after quick hands from Tommy Walsh found Padraig Griffin, sustained Rahillys for the remainder of the half and it was only two good points from Sheehan and another from Ronan Hussey late in the half that dragged South Kerry back into the game on the scoreboard by half time. The District side had kicked seven wides during that opening half, the majority from the usually reliable Sheehan. A 1-3 to 0-5 lead at the break for Rahillys did not reflect the trend of the game despite David Moran doing Trojan work for the Blues around the middle and Cormac Coffey defiant in the half back line.

Rahillys did have a good ten minute spell on the resumption but South Kerry continued to kick wide after wide and Rahillys hung in there for as long as they could. Finally, a point from a “45” by Paul O’Donoghue who had taken over the placed ball duty by now, and another from Daniel Daly levelled the game with 12 minutes to go. The winners still found it hard to edge ahead against a resolute Rahillys defence but those two late points in the 29th minute from Daniel Daly and Mark Griffin finally killed off the Tralee side’s challenge.

South Kerry, without county player Killian Young, will have a lot of improving to do if they are to stand a realistic chance of defeating champions Dr Crokes in the decider, but semi finals are all about winning regardless of what the margin is. 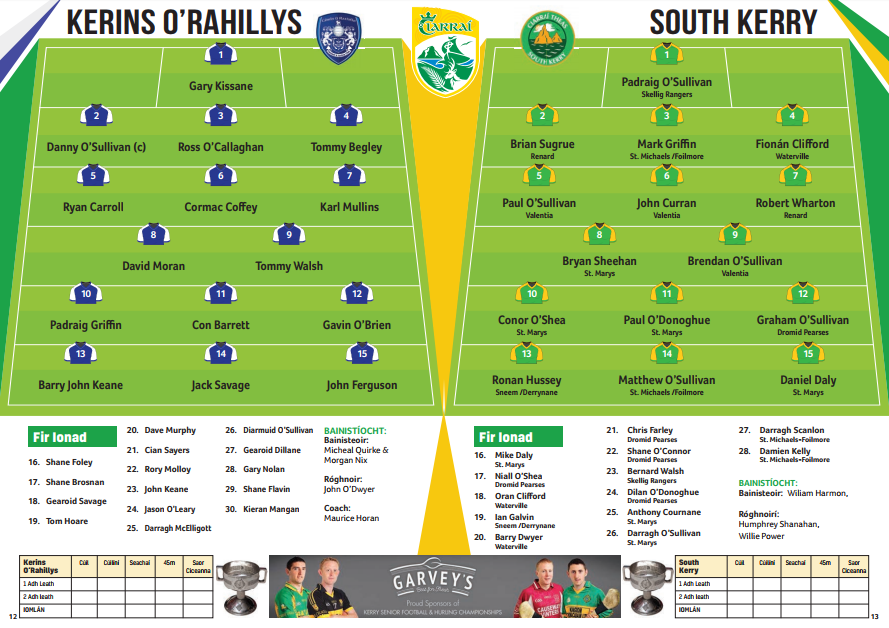