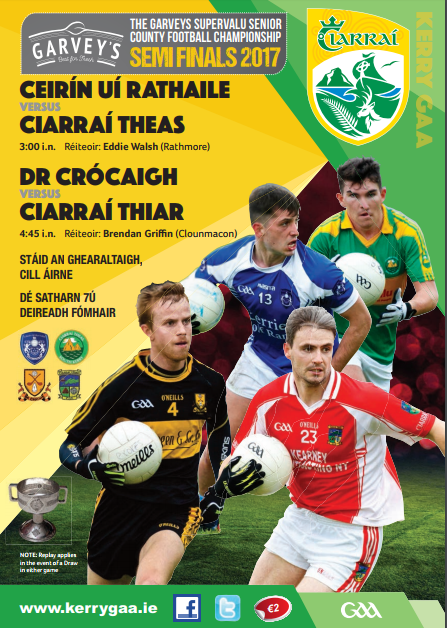 The Garveys SuperValu Senior Football Championship Semi Finals take centre stage this weekend with four teams fighting it out for places in the county final on the 22nd of October. Fitzgerald Stadium in Killarney is the venue on Saturday evening for the two Club Vs Division encounters with Kerins O’Rahillys and South Kerry getting proceedings underway at 3pm and holders Dr Crokes putting their title on the line when they take on West Kerry in the second game at 4:45pm.

South Kerry and Kerins O’Rahillys renew acquaintances having already met in the opening round in Strand Road when the visitors surrendered a four points lead having suffered injuries to some key players. Since then the Divisional side have regrouped and had victories over Kilcummin and Dingle before getting the better of Rathmore in the semi final by a three points margin. They come into Saturday’s game under a cloud however with doubts about the fitness of their two most prominent players, Killian Young and Bryan Sheehan. Those players apart, they do have a nice mix of experienced players such as Mark Griffin, Brendan O’Sullivan and Paul O’Donoghue through the middle together with up and coming players such as Brian Sugrue, Robert Wharton, Graham O’Sullivan and Matthew O’Sullivan who really caught the eye against Rathmore.

Kerins O’Rahillys followed up that initial win with a fine victory over a fancied Dingle side and in the latter’s own Páirc an Ághasaigh at that having lost Tommy Walsh very early in proceedings. Since that evening in Dingle the Tralee side did not exactly set the place on fire in the League and indeed it was only in the latter stages as championship approached that they got their act together. There was no denying the fact that they were impressive in the Quarter final victory over East Kerry a fortnight ago a night on which their big men stood up and were counted. Tommy Walsh was one of those and it bodes well for the Blues that the former county player showed some of the touches that endeared him to Kerry supporters in the late noughties.

This has all the makings of a fine game of football between two sides who have a reputation for attacking football, Both sides have a liberal sprinkling of current and former county players along with some up and coming talent from the successful county minor sides of recent years. The hgame will be refereed by Eddie Walsh of Rathmore.

The second game of the double bill is no less interesting than the first and indeed we are in for another treat in this one when the experienced title holders go head to head against the young pretenders from the West. Dr Crokes showed no let up in the momentum they built up en route to All Ireland Club Championship glory when ruthlessly securing a quarter final place when brushing aside the challenge of Mid Kerry and St Brendans amassing a scoring total of 9-31 in the process. They do have the strongest panel in the county of course and furthermore they know how to use those vast reserves of talent when the need arises. They had two good workouts in recent weks when defeating Kenmare District on the double in both the Club Championship final and the quarter final a fortnight ago. They will be concerned about the fitness of Kieran O’Leary who limped out of that five points victory over Kenmare.

West Kerry are somewhat unique for a Divisional side in that they are backboned almost entirely by players from the one club. An Ghaeltacht provided twelve of the starting fifteen against Austin Stacks in the quarter final and just for the record, their trainer, Paul Quinn is also a Gaeltacht clubman. They are certainly a very youthful side with many of their players such as Cathal Ó Lúing Brian Ó Beaglaoich, Rob Ó Sé, Tomás Ó Sé and Eánna Ó Conchúir in or around the 21 mark. However, they did open their campaign with a loss to Feale rangers and in Gallarus at that but they recovered to see off St Kierans in Round 2, also on home soil,before getting the better of Legion by three points after extra time. They were always shaping like winners against Austin Stacks in the Quarter final however.

This will be a game that will not lack a bit of bite to it; All Ireland champions do not lie down too easily and certainly not in their own back yard but with nothing to lose, the youthful challengers are sure to make a right good game of it. Referee is Brendan Griffin of Clounmacon.

Should either semi final end in a draw, there will be a replay. The games are being televised live by Eir Sport.

Gates at the Fitzgerald Stadium will open at 1:30pm on Saturday.  Entrance to both Stand and Terrace will be by Lewis Road and Daltons Avenue. Ticket Vans will be in place at both locations. Admission to the double bill is €13 with €5 concession for students and OAPS on production of a valid ID. Under 16s are free.