Champions dethroned as Ballyduff and Lixnaw qualify for Final

You are here: Home/ News/ Champions dethroned as Ballyduff and Lixnaw qualify for Final

Champions dethroned as Ballyduff and Lixnaw qualify for Final 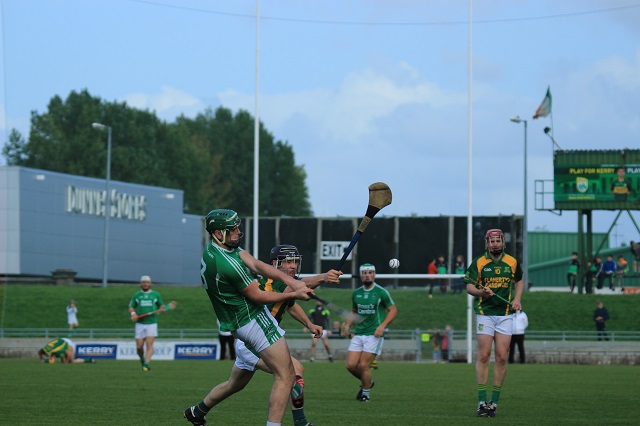 Champions of the last two years, Kilmoyley were defeated as Ballyduff came back from a six points half time deficit to qualify for the Final where they will meet Lixnaw who accounted for St Brendans in the other Semi Final.

A second half metamorphous of the sporting kind turned a lame Kerry SHC semi-final at the Austin Stack Park Tralee between three in a row seeking Kilmoyley and a written off Ballyduff side into a thunderous second half that saw Ballyduff produce an incredible comeback.

The first half was a sleep fest as Daniel Collins with nine points, all but two from placed balls and a point from Sean Maunsell had Kilmoyley in cruise mode as they led 0-10 to 0-4 at the interval with Podge Boyle with two frees, and one each from Jack O’Sullivan and Daniel O’Carroll barely keeping Ballyduff in the game.

“ Everybody had us written off that we were old and we were past it but we had good faith in our guys because that had prepared hard and did a lot of work to prepare for today. But it was 0-10 to 0-4 at half time and look they got eight frees and we knew that it was frees that was going to kill us in the finish unless we became more disciplined. So we said to the lads at half time if we could keep the free countdown to maybe four or so they would struggle to score and so it transpired as I think they only scored 2 in the second half and we said if we can reach 1-15 we will win the game”

But not alone did Ballyduff stop conceding frees but their intensity levels increased – why did Liam Ross think a team could change from one half to the other “ I think we were standing off Kilmoyley in the opening half and giving their players too much respect. We knew we had the players who could drive it on and get stuck in and win most of the physical battles.  So we knew by upping our intensity that we would be right in there with a shout. It was I would think even for neutrals the best second half of hurling in the county for years.

While Kilmoyley were battling away in the second half we had that bit more intensity and when we were going for the ball, we were getting the breaks in the second half. Look, I suppose our physique probably told in the end. The subs made a difference with Gary O’Brien using his physique inside and Paul Carroll came on and he won the break for the first point we got in the second half. I would say that it was Paud Costello’s best game of hurling he had for years and it was great considering the injuries he has been plagued with. We felt we should have beaten Kilmoyley the first day in last year’s county final but they were better in the second game and over the two games. So people were writing us off even in our own parish so the lads have been targeting Kilmoyley since then whether in a final or semi- but we are delighted to have won”

The Duffers outscored Kilmoyley 1-13 to 0-6 in the second half was Podge Boyle, Mikey Boyle, Jack Goulding, Paud Costello and Jack O’Sullivan transformed the contest and Kilmoyley were helpless to stop the onslaught.

Podge Boyle’s 35th minute goal ignited Ballyduff and they hurled as if their lives were at stake with Boyle adding another six points, Jack Goulding fired over two, while Mikey Boyle chipped in with an inspirational score as Ballyduff produced the best thirty minutes of hurling of this year’s championship

Lixnaw advanced to meet neighbours Ballyduff after this high intensity SHC semi-final played at the Austin Stack Park on Sunday afternoon but it took a combination of some excellent scores from the Conway brothers and two sending’s off to see them over the winning line.

St Brendan’s looked the better side for much of the opening half following a 4th minute goal from Cian Hussey and points from John Egan (2), Hussey, Tom Moloney, Brendan O’Connor and David Griffin as they led 1-6 to 0-5 at the interval.

Shane Conway contributed 0-4 but saw his penalty attempt brilliantly saved by Darren Delaney while wing back Brendan Brosnan scored a beauty from play.

St Brendan’s should have been further ahead at half time because Lixnaw appeared flat early something their manager Mark Foley admitted to post match “Look to be fair we did not play well all through the game and we looked a bit off the pace and I suppose you can do all the training you want, play all the challenges you want but the reality is that we have not played championship for a long – long time and that probably showed today. We were probably a good bit off the pace but to be fair the players took that on board and they still showed great character in the second half against the wind to get over the line”

Foley admitted that injuries were a problem in the lead-up to the game and their main injury concern Mike Conway just about got the nod to start but his three points proved crucial.  “Mike Conway came up with three top class scores in the second half and one of them he was not even looking as he hit it over his shoulder which was a great score. Mike has trained with us for the last three weeks and has been struggling and it was touch and go up until today whether he would play or not. He did the warm up and said he felt ok so we felt we were better off starting him than bringing him on and taking him off again if he broke down. So thankfully Mike came up today with some great scores and I am delighted for him really”

Two early Shane Conway points, one a free and the other a thing of beauty after a build up involving his brother Mike and Rickie Heffernan.

But St Brendan’s hit back 38th minute after a defensive slip saw John Egan get in behind the Lixnaw defense and buried it to far corner of the net and it appeared to have given St Brendan’s the edge as they led 2-6 to 0-7 but when Kerry defender Rory Horgan got a red card a minute later after the umpires spotted an off the ball incident with Ricky Heffernan, St Brendan’s world fell apart and Lixnaw took over.

The Conway brother’s Shane and Michael closed the gap and then in the 49th minute John Buckley’s long delivery was flicked to the net by Brian McAuliffe and Lixnaw were a point in front. Mike Conway from a Jeremy McKenna assist fired one over with his back to goal and then disaster for St Brendan’s that damaged them below the waterline.

Kevin Orpen picked up a second yellow for St Brendan’s it was game over as John Griffin and Brendan Brosnan shone in the closing minutes.

Despite frees from John Egan and a Kevin Skinner point, Brendan Brosnan and Mike Conway responded for Lixnaw and despite late pressure the extra men, meant Lixnaw were able to drop players back and the goal St Brendan’s needed never came.