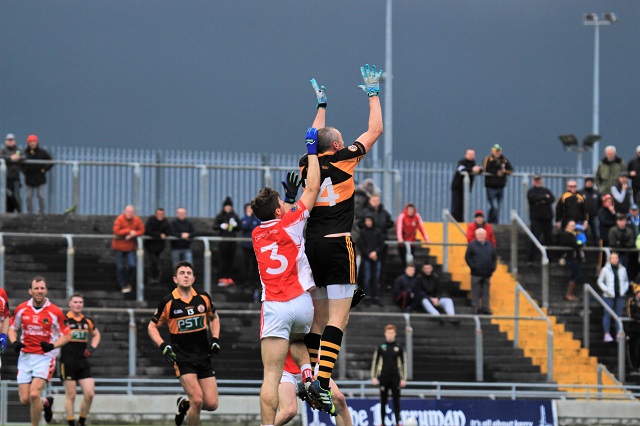 There was mixed luck for both Divisional and Tralee sides in the first of the Garvey's SuperValu Senior Football Championship Quarter Final double bills at Austin Stack Park as Kerins O’Rahillys easily accounted for a disappointing East Kerry side and West Kerry put an end to any aspirations Austin Satcks had of winning the title.

Kerins O’Rahillys made light of the East Kerry challenge in the opening game of the senior football championship double bill at a wet and blustery Austin Stack Park this afternoon.

The blues were always in control of this game with the likes of David Moran, Tommy Walsh, and Barry John Keane in superb form throughout and even the inclusion of minor sensation David Clifford could do anything to turn the tide in favour of the men from the East with Moran dominating the middle, Rahillys got the perfect start and were 4 points to 1 ahead inside the opening 8 minutes with Barry John Keane pointing two frees and Tommy Walsh also very involved.

The winners could afford the luxury of a missed penalty in the 10th minute  – David Moran drove to the right and wide – and the East Kerry goal had another let-off soon after when John Ferguson drove wide after good work by Cormac Coffey and Tommy Walsh. Dara Roche pulled a point back for East Kerry from a free but then Rahillys did what they had been threatening to do – score a goal. It came in the 19th minute when Jack Savage, Tommy Walsh and David Moran combined and the latter it was who sent a fine shot to the East Kerry net. Paudie Clifford pointed for East Kerry and then Jack Sherwood scored a fine goal out of the blue  after good work by Dara Roche to leave the score 1-4 to 1-3 in favour of Rahillys. At the other end, Ferguson should have done better after being fed by Tommy Walsh and five minutes later Barry John Keane shot straight at Colin Myers when he looked like goaling. Gavin O’Brien and Keane did point late on and at the break it was 1-7 to 1-4 for the winners.

Barry John and David Clifford exchanged pointed frees on the restart but then Rahillys struck for their second goal when Tommy Walsh controlled a high ball and pulled on it first time to the net. John Ferguson passed up another goal chance for Rahillys and at the other end two East Kerry players missed a chance of finishing the ball to the net in the 39th minute. A minute later the outstanding Tommy Walsh set up Gary O’Brien for Rahily’s third goal and leading by 3-9 to 0-5 there was no way back for East Kerry.  There were just four scores in the remaining time with David Moran, Jack Savage and Barry John Keane pointing for Rahillys and Jeff O’Donoghue getting a consolation point for East Kerry.

A six point victory was probably a fair reflection of the play as West Kerry put Austin Stacks to the sword in the second game at Austin Stack Park.

West Kerry got off to a flying start and thereafter Stacks were always playing catchup. The Tralee side could never get a foothold in midfield despite the occasional presence of Kieran Donoghy in that area as Alan Fitzgerald, Rob Ó Sé and Jason Hickson dominated play in that around the middle. Up front, the outstanding Eánna Ó Conchúir, Tomás Ó Sé and Dara Ó Sé were always asking questions of the Stacks defence while at the back, Cathal Ó Lúing and Padraig Ó Sé anchored the centre of defence very well.

West Kerry were three points to the good within six minutes and then Sean Michéal Ó Conchúir found Eanna Ó Conchúir with a cross from the left and the Gaeltacht man finished to the net for the only goal of the game in the 11th minute. Dara Ó Sé pointed the winners further in front but then Stacks had a good spell outscoring their opponents by 5 points to 2 between the 14th and 21st minute with Darragh O’Brien  getting three of those scores (1 from a free).Eanna Ó Conchúir hit the post in the 22nd  minute when he should have goaled but the winners then scored 4 good points to 1 in reply to lead by 1-10 to 0-7 by the 28th minute. Late points from Darragh O’Brien and David Mannix (free) for the Rockies left four points between them at the break, 1-10 to 0-9.

A David Mannix free and a fine score from out the field by Kieran Donaghy to one in reply by Brian Ó Beaglaoich had only reduced the deficit by the minimum by the 40th minute but then in the space of two minutes West Kerry put light between themselves and Stacks with a point from Dara Ó Sé and two from Sean Mhichíl Ó Conchúir (one play) to surge 1-14 to 0-11 clear by the three quarter stage. Kieran Donaghy was trying his best for Stacks but was very often crowded out by a quick tackling West Kerry defence and thereafter the winners never let the margin below the four points mark responding to any scores from the Tralee side as the game became untidy with a number of Black and Yellow cards.