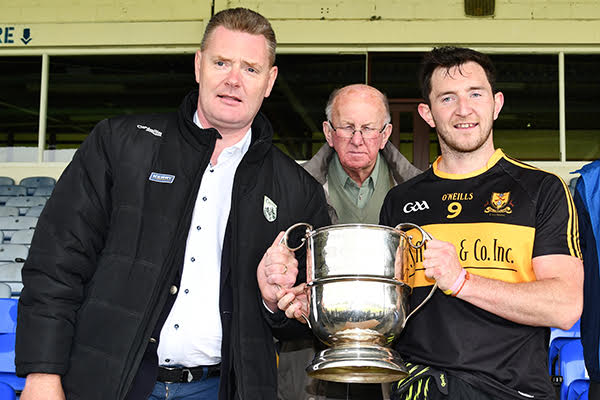 Dr Crokes are the Castleisland Mart Senior Club Championship champions following victory over a gallant Kenmare side at a windy and wet Fitzgerald Stadium this afternoon. However, the All Ireland champions needed extra time to defeat a Kenmare side who refused to lie down and who came very close to carrying the day in normal time.

Dr Crokes had first use of the strong wind and had 2 points inside the first minute from Micheal Burns and Colm Cooper but Kenmare settled and after Sean O’Shea pointed a free Stephen O’Brien played in David Hallissey for a goal in the 4th minute. Kenmare were struggling with their kickout strategy against the wind and Johnny Buckley hit the crossbar after capitalising on one such kick but the same player had the ball in the net in the 7th minute when Colm Cooper deftly avoided a pass from Kieran O’Leary to leave Buckley with a free passage to goal. Burns and Brian Looney added points but after Sean O’Shea pointed a free young Micheál McCarthy cut in from the right and gave Shane Murphy no chance in the 14th minute to leave the scores tied 1-4 to 2-1.

Paul O’Connor pointed Kenmare in front a minute later but the rest of the half belonged to Dr Crokes who kicked 5 points without reply with Burns bringing his tally to four. Kenmare continued to struggle on their own kickout and their goal was almost breached twice in quick succession in the 20th minute. Sean O’Shea raised the siege with a pointed free but then Daithí Casey grabbed 1-2 in a three minute spell before the break at which stage the Killarney side led by 2-11 to 2-4 - a score that reflected the run of play.

It was score for score for the first eight minutes of the second half with the sides sharing 6 points the pick of which was a great point from 60 yards by Sean O’Shea. Kenmare, despite playing with a strong wind, were not pushing up on the Crokes kickout and were playing with just two players up front but when O’Shea pointed in the 9th minute it was the first of 8 points on the trot for the wearers of the red and black. Some of those scores were from the top drawer and it took a fine save by Shane Murphy to deny Brian O’Sullivan in the 47th minute. A booming 60 yards free by O’Shea in the 57th minute drew the sides level and when Crokes fluffed their lines on the kickout O’Shea pointed Kenmare in front from a free. Crokes are made of stern stuff however and after a Colm Cooper Free levelled matters Kieran O’Leary’s point looked to have given his side victory in the 61st minute, but Kevin O’Sullivan played a captain’s role when kicking the equaliser a minute later to send the game to the obligatory extra time with the score standing at 2-16 apiece.

Kenmare had first use of the wind on the restart and Sean O’Shea pointed a free and followed with a point from play from 40 yards, however, sub Ambrose O’Donovan drove powerfully to the net in the 4th minute of the half after another sub, Paul Clarke, kept the ball alive on the endline. At the break it was 3-16 to 2-18 for Dr Crokes.

The sides swapped points twice in the final ten minute period but late scores from Daithí Casey and Tony Brosnan secured the Michael O’Connor Cup for Dr Crokes and after the game the cup was presented to Dr Crokes captain Daithí Casey by the chairman of the County Committee Tim Murphy.