You are here: Home/ News/ Final Round of the Credit Union Senior Football League 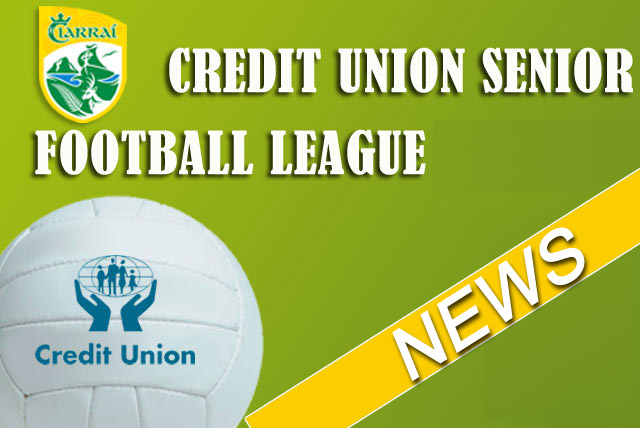 With the exception of one game in Division 3, the final round of games in the Credit Union Senior Football League will be played this weekend with all games where promotion and relegation issues are at stake fixed for Sunday at 1:30pm (earlier time is to avoid a clash with the All Ireland Hurling Final).

The following is the situation in the various Divisions.

In Division 1, Dr Crokes have already qualified for the Division 1 Final and the second final place rests between An Ghaeltacht, who are on 16 points and need just a point away to St Marys, and Rathmore on 14 points who are at home to Austin Stacks.

Castleisland Desmonds and Austin Stacks are already relegated to Division 2 next season and Milltown-Castlemaine, on 6 points, and St Marys on 8 points will fight it out to avoid the third relegation place. Milltown-Castlemaine are away to John Mitchels and St Marys, who need just a point to be safe, are at home to An Ghaeltacht.

In Division 2, Killarney Legion, who need just a point from their game with Glenflesk to top the table, Spa and Beaufort are all already promoted to the top division next season.

In Division 3, Ballymacelligott, Na Gaeil (both on 17 points) and Dromid Pearses (16 points) are already promoted to Division 2 next season., however it has yet to be decided who will go up as champions and that issue may very well not be decided until Sunday 24th September when Ballymacelligott and Na Gaeil will play their final round. Dromid are away to Finuge this weekend.

At the foot of the Division 3 table, St Michaels-Foilmore are already relegated to Division 4 and they will be joined by two from Fossa (4 points) , Gneeveguilla (5 points), Ballydonoghue (8  points) and St Senans (9 points) who are all in relegation trouble.

There is an important back game to be played on Friday evening  that will have a big bearing on the relegation situation when Gneeveguilla play Fossa and both of these sides will be in action again on Sunday when Gneeveguilla travel to play St Senans and Fossa are at home to Brosna.

In Division 4, the top three promotion places rest between Keel, Lispole, (both on 17 points) Skellig Rangers and Dr Crokes (both 16 points) with a playoff very likely being required to decide placings.

At the bottom of the table, Scartaglen and Sneem-Derrynane are already relegated to Division 5 next season and the remaining relegation place is between Duagh who are on 5 points (at home to Renard) and Beale who are on 6 points (home to Sneem-Derrynane).

In Division 5, Cordal (21 points) and Ballylongford (20 points) are already promoted with the final promotion place resting between Churchill who are on 16 points with all games played, Rathmore who are on 15 points and play Ballyduff in their final game and Cromane who are also on 15 points and travel to Moyvane. A playoff may be necessary to decide the final promotion place. 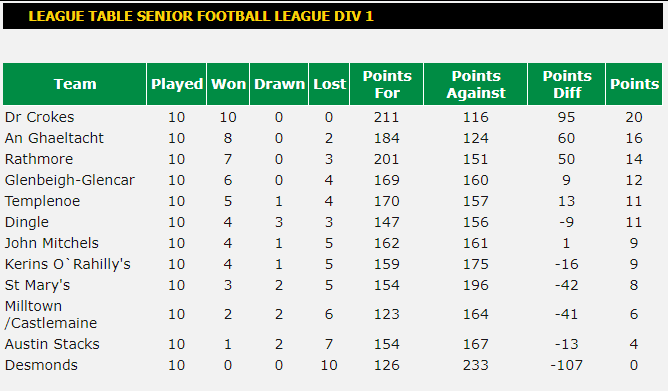 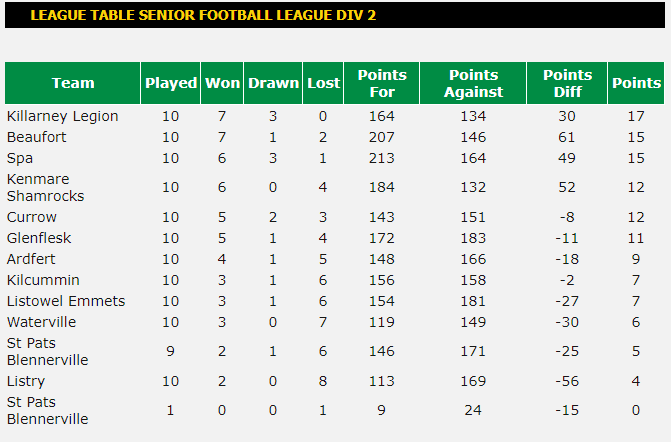 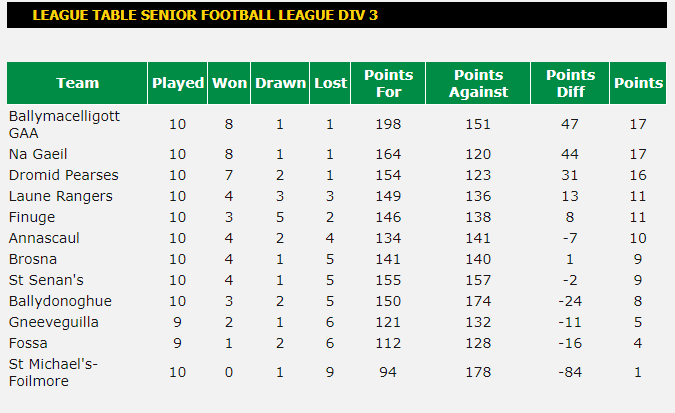 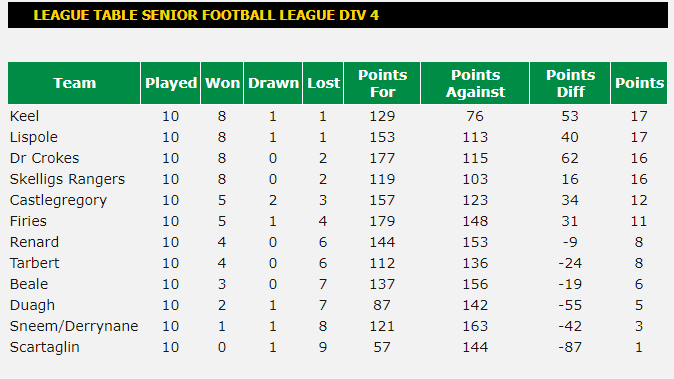 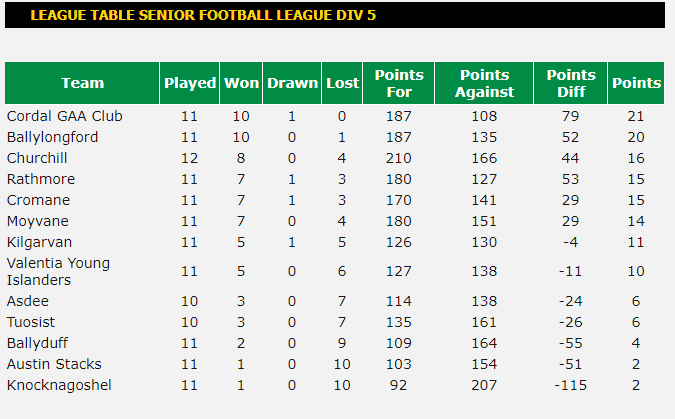