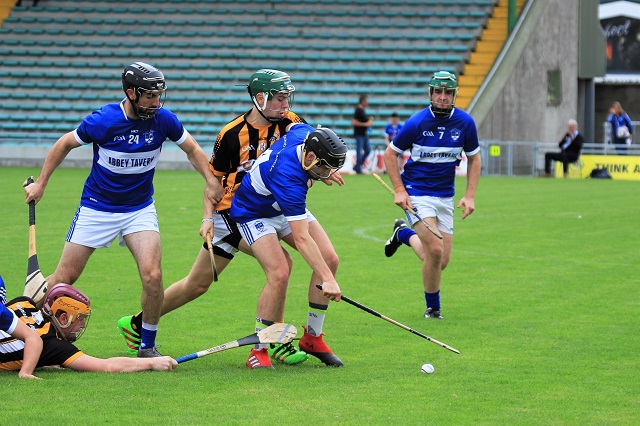 St Brendans qualified for the semi finals of the Garveys Supervalu Senior Hurling Championship following a dramatic Extra Time victory over a luckless Abbeydorney side at Austin Stack Park this afternoon.

With time almost up in normal time and the sides deadlocked on 15 points apiece, Ronan Donovan seemed to have given the underdogs a famous victory when he whipped the ball over the goal line for what looked like the match-winning score but straight from the puck-out St Brendans cut through the middle and David Griffin despatched the ball to the O’Dorney net to send the game into Extra Time.

That first ten minutes of additional time  was riddled with good scores with first Kevin Skinner getting a brace for the winners  and Nigel Roche replying with two frees for O’Dorney; John Egan pointed two frees for St Brendans and then David Egan scrambled the ball home for O’Dorney to leave them 2-17 to 1-19 ahead at the break. In a tense final period John Egan and Cian Hussey pointed St Brendans in front only for Nigel Roche to level it up again before, with almost the last puck of the game, Tom Moloney became the St Brendans hero with a last gasp point from out the field to clinch a semi final place against Lixnaw.

The game opened with the sides sharing scores throughout the first quarter with Nigel Roche pointing four frees for O’Dorney and Kevin Skinner and Cian Hussey getting a brace each for Brendans to leave the score 5 points all. Two pointed frees from Roche and a good point from James O’Connor had O’Dorney three clear and they maintained that advantage to the break at which stage the score stood at 10 points to 7.

John Egan and Cian Hussey had quick points for Brendans on the resumption but in what was a good spell for them, O’Dorney added four points without reply to lead by 14 points to 9 eleven minutes into the new half with Darren Delaney also having to well from Stevie O’Sullivan. Brendans fought their way back into the game with points by Hussey, Egan and Skinner to one in reply from Nigel Roche for O’Dorney who still led by 15 points to 12 after 20 minutes of the half. Two frees from John Egan either side of a David Griffin score saw the sides on level terms before that late goal drama sent the game to Extra Time.