Kerry & Mayo to do it all again!

You are here: Home/ News/ Kerry & Mayo to do it all again!

Kerry & Mayo to do it all again! 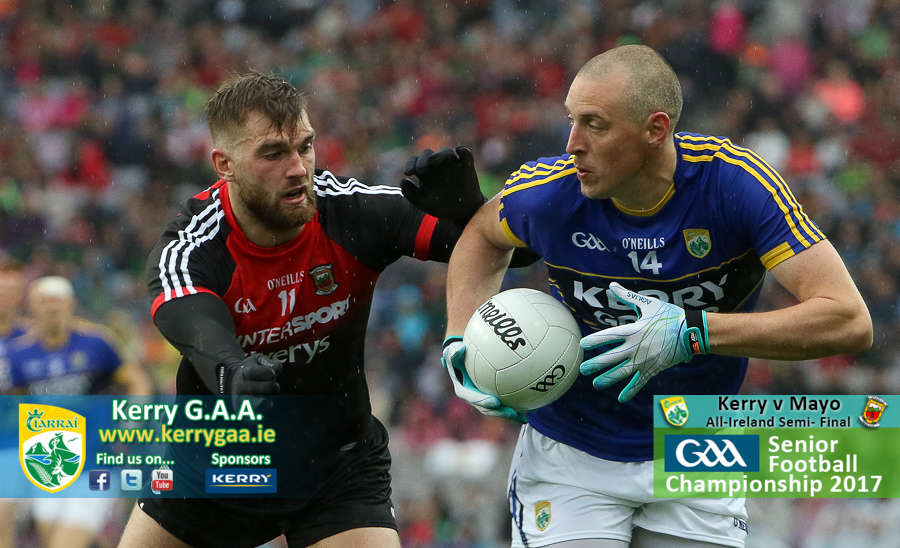 Talk swirled throughout the week about a couple of 2014 classics involving Kerry and Mayo so it was only appropriate that another gripping game went the distance.

Paddy Durcan, the splendid Castlebar Mitchels clubman, had the honour of landing a gorgeous last gasp point to ensure a replay will be required at Croke Park next Saturday. 66,195 spectators watched an enthralling match unfold.

Andy Moran mining 1-5 at one end; Aidan O’Shea battling with Kieran Donaghy at the other. Meanwhile in a clustered middle sector collisions and turnovers were forced. Both teams had pockets of supremacy, but parity eventually prevailed.

Unsurprisingly it commenced at a decent clip and when Andy Moran planted a fifth minute goal Mayo were very much in the groove.

By the 13th minute Mayo led 1-2 to 0-2 when Kerry pounced for a major when Donaghy released Stephen O’Brien, who finished smartly.

Killian Young and James O’Donoghue subsequently added points, but then came a Mayo flurry which yielded 1-3 without reply.

Moran, using all his guile and experience, was central, while Colm Boyle, one of the defensive warriors, thundered up the pitch to grab a goal.

Following that Mayo burst, Stephen Rochford’s charges were 2-5 to 1-4 ahead, but it sparked a Kerry rally.

Four points on the spin from Paul Geaney (three frees) and Donaghy ensured the teams departed deadlocked at the break, 2-5 to 1-8.

Delicately poised it continued to ebb and flow. Moran, Donal Vaughan, Cillian O’Connor, and Tom Parsons all raised white flags as Mayo accumulated a 2-9 to 1-9 advantage.

Then Kerry crashed a 46th minute goal when Johnny Buckley made the Mayo net dance following a David Clarke save from David Moran.

It stayed fast, frenetic, and furious. Kerry hit the front. Mayo levelled. That happened again before O’Connor guided Mayo 2-13 to 2-12 ahead with nine minutes left on the clock.

Kerry had one last gasp opportunity, but Bryan Sheehan’s long distance free was gathered by Aidan O’Shea. Ultimately it means Kerry and Mayo return to the Jones Road venue at 3pm next Saturday. The next instalment should be similarly fascinating.

The Kerry Senior Football Team to play Mayo in the All Ireland Senior Football Championship Semi  Final in Croke Park on Sunday next shows three changes in personnel from the side that defeated Galway in the quarter final;

Bryan Sheehan and Gavin Crowley come into the match day panel and are included in the substitutes.

The team captained by Johnny Buckley is as follows:

Additional Members of the Kerry Panel:

The Kerry Senior Football Team to play Mayo in the All Ireland semi final in Croke Park on Sunday at 3:30pm is to be announced on this Friday evening at 8pm and posted on the Kerry GAA Website

Kerry and Mayo renew rivalry in All Ireland semi final

Kerry and Mayo renew All Ireland Championship rivalry when they go head to head in the semi final at Croke Park on Sunday next (3:30pm). Mention of this game immediately brings back memories of the epic tussles between the side at the same stage three years ago. On that occasion, an outstanding individual effort from Kieran O’Leary saved Kerry’s bacon just when Mayo seemed to have got over the line after controlling the second half (1-16 each). There was controversy galore when the replay was fixed for the Gaelic Grounds in Limerick but that was not a patch on what was to follow once the ball was thrown in! The game ebbed and flowed, one way and then the other and eventually, after extra time, and after a game that had just about everything, Kerry prevailed in front of 36,256 enthralled spectators by three points (3-16 to 3-13).  The fact that Kerry went on to lift Sam Maguire only served to rub salt into gaping Mayo wounds following that Titanic struggle. The Connaught side endured a Winter of discontent with James Horan being replaced but in fairness to them, they came back strongly, have held Dublin to Championship replays twice and came very close to getting the eventual honours last year against the same opposition.

Mayo are playing with more or less the same panel of players over the past few years and that is something that cannot be said of Kerry. The Kingdom have lost the services of the likes of Marc Ó Sé, Aidan O’Mahony, Colm Cooper, Declan O’Sullivan and the man who saved them in 2014, Kieran O’Leary but those apart, Kerry have very few rookies in or around the starting fifteen with the obvious exceptions of Kevin McCarthy, Jack Barry, and maybe Tadhg Morley.

The respective paths to Sunday’s showdown have been quite different. Kerry were far from impressive when disposing of Clare following a long lay off subsequent to their League Final victory over Dublin. They had an easier than expected victory over Cork on home territory and then, while never in danger of losing the game, they did not exactly shoot the lights out against Galway in the quarter final. Mayo have had a topsy-turvy ride to the semi finals; for the second year running they fell to Galway in Connaught and subsequently were taken to extra time by both Derry and Cork before getting the fright of their lives when held to a draw by Roscommon in the quarter final. However, in the replay they certainly made a statement of intent when mincing the Roscommon challenge right from the off that game would be seen as a right confidence booster for them - and coming exactly at the right time of the season as well. Incidentally, Roscommon apart (in the case of Mayo), neither side have come up against a Division 1 side en route to the semi finals.

So, it’s all down once again to what will happen on the day. Mayo’s big players seem to be back in business and that does not augur well for Kerry as guys like Lee Keegan, Aidan O’Shea, Keith Higgins and Cillian O’Connor are real leaders. Kerry will hardly stray too far from the fifteen that did duty in the quarter final but they need to bring their “a” game to the

plate from the off and display the kind of ruthlessness that is necessary at this level and more especially at this, the penultimate stage of the competition.

The experienced Laois official Maurice Deegan will be the man in charge and the Kerry team will be announced on Friday evening at 8pm and posted on the Kerry GAA Website.