You are here: Home/ News/ Kerry Minors advance to All Ireland Final 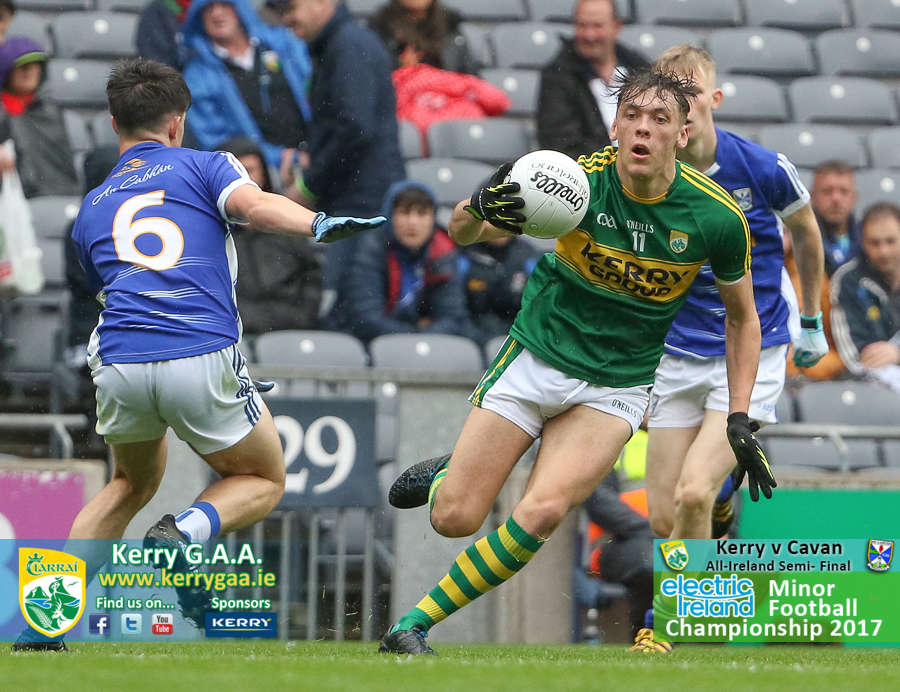 Clifford, one of four players who lined out in last year's final win over Galway, oozed class and kicked 1-7 of his haul from open play. The Fossa teenager captained the side and set up a number of scores for his colleagues including the 63rd minute goal scored by substitute Jack Griffin.

Kerry will bid to become the first county to win four All-Ireland minor titles in a row when they play Dublin or Derry in the final on September 17.

Griffin finished with 1-1 for the Munster champions, while Friel was excellent overall and claimed four points with nine different players making the score-sheet.

It was Cavan's first semi-final at the grade since 1974 and they enjoyed a purple patch in the third quarter of the game when they kicked 1-5 without reply to reduce a 13-point deficit to just five.

But Kerry finished strongly with that Griffin goal and were good value overall for the dozen point win.

Beaten Ulster finalists Cavan turned their season around with a big quarter-final win over Galway.

The Breffni County were on level terms twice inside the first 10 minutes here, but fell 0-4 to 0-2 behind following Kerry points from Clifford and Diarmuid O'Connor and never recovered.

A burst of six Kerry points without reply between the 16th and 26th minutes moved the Munster champions 0-10 to 0-03 and hinted at a rout.

By this stage, Clifford had claimed five points and won a free for Donal O'Sullivan to convert.

Cavan, who had created some opportunities for points, but wasted them, were thrown a lifeline in the form of a fortunate 27th minute goal.

Pierson then tapped over a free and suddenly Kerry led by just 0-11 to 1-4 at half-time when it should have been more.

Kerry restarted with gusto though and closed out the game within minutes.

Clifford twice went close with goals, hitting the side-netting and then drawing a fine save from Gary O'Rourke before eventually netting in the 35th minute.

He caught a high ball on the edge of the square above Cavan defender Danny Cusack, spun away from his man and struck to the net.

Friel and then Clifford again added points to put Kerry 1-14 to 1-4 clear.

Kerry scored 1-6 in total without reply before James Smith finally stemmed the green and gold tide with a 46th minute point for Cavan.

There was that solid response from Cavan and Smith fired their second goal while Pierson took his tally to 1-5 for the day, but it was too little, too late and Kerry rallied in stoppage time.

The Kerry Minor Football Team to play Cavan in the Electric Ireland GAA All Ireland Minor Football Championship Semi Final at Croke Park on Sunday next shows one change in personnel from the side that defeated Louth in the Quarter Final.

Patrick Warren of Gneeveguilla comes in at half back with Michael Potts moving to centre back in place of Eddie Horan.

The team, captained by David Clifford, is as follows:

The team contains just four of the side who played in the All Ireland Minor Final last year - Michael Potts, Diarmuid O'Connor, Brian Friel and David Clifford.

Potts, together with Chris O'Donoghue, Cian Gammell, Niall Donohue and Donnchadh O'Sullivan, were members of the St. Brendan's College Hogan Cup winning side this year.

2 of the team played in the Under 17 Semi-Final against Roscommon last weekend; Deividas Uosis  and Donal O'Sullivan as well as subs Eddie Horan and Dylan Casey.

Kerry have played 4 games en-route to Sunday's Semi-Final as follows:

The Kerry Minor Football Team to play Cavan in the All Ireland semi final in Croke Park on Sunday at 1:30pm is to be announced on this Friday evening at 8pm and posted on the Kerry GAA Website

Kerry Minors will put the county’s long running winning run on the line when they take on Cavan in the Electric Ireland Minor championship semi final in Croke Park on Sunday (1:30pm). One has to go all the way back to August 2013 for Kerry’s last defeat at this level, that at the hands of Tyrone in the semi final, but of course the personnel are constantly changing in this grade and stats like that one will hardly matter much on Sunday next.

Kerry have had four games en route to Sunday’s game easily accounting for Clare twice and in between they really demolished Cork by 2-17 to 1-10 with the tour-de-force from captain David Clifford who scored 2-8 in the process. In their final game, against Louth in Portlaoise they mixed the good with the bad but were never in danger of losing running out 10 points winners in the end.

A number of the players such as Deividas Uosis, Eddie Horan, Donal O’Sullivan and Dylan Casey were in action for the Under 17s in their defeat by Roscommon last weekend and it remains to be seen how they will recover from that setback but it should be remembered that there is only one championship and that is at Minor level and once they focus on that they should be right mentally for the fray.

The Breffni boys certainly surprised many observers in the quarter finals with their 1-11 to 0-11 victory over last year’s beaten finalists Galway. Cavan had defeated Monaghan and Down on their way to the Ulster final but they were well beaten by Derry by 1-22 to 1-12 in the Ulster decider. They are sure to bring a big following to Croke Park – their last semi final appearance was over twenty years ago so they will not be lacking in motivation. I am sure that Kerry manager Peter Keane and his backroom team will have their team well primed in advance of this potential banana skin – after all semi finals are strictly for winning - regardless of how it is achieved.

Referee for Sunday is Liam Devenney of Mayo and the Kerry team will be announced on Friday evening at 8pm and posted on the Kerry GAA Website.