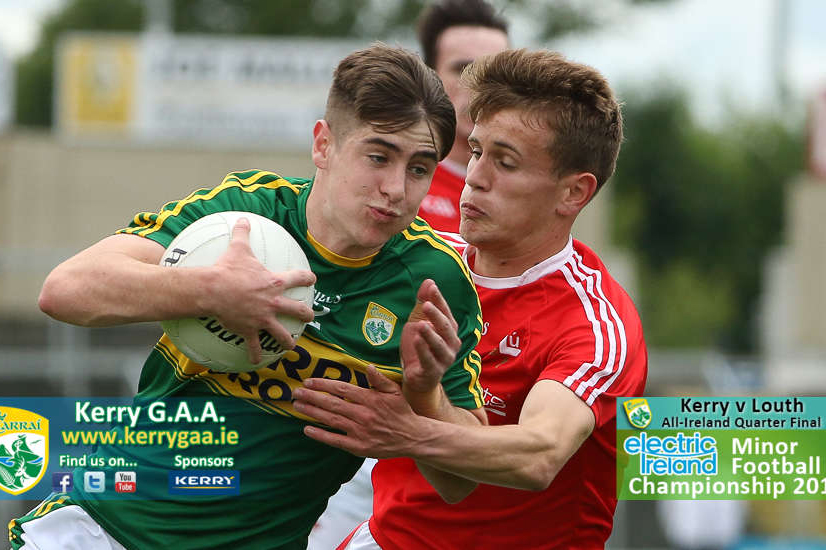 By Samuel Mansfield and Diarmuid Kearney

A Donnchadh O’Sullivan goal early on and 9 points from David Clifford was enough to help the Kingdom book a semi final place following a convincing 10 point victory over Louth in Portlaoise.

Kerry displayed great attacking prowess throughout the opening half with Clifford on hand for five points after Donnchadh O’Sullivan burst through the defence smashing the ball past the Louth Keeper in the 8th minute to give Kerry a 9 point advantage late in the first half.

However Louth scores came from the boot of John Gallagher and Ciaran Keenan as they pulled the deficit back to seven points but Kerry responded with a four points burst once more before two Ciaran Keenan points and a goal from the same player on the call of half time reduced the deficit before halftime making the game a contest once more on an scoreline of 1-11 to 1-5.

Kerry started strong in the second half and almost had another goal but Louth keeper Alan McGauley saved smartly to deny Adam Donoghue.

Louth had the ball in the net once more with 39 minutes played, breaking down the Kerry backline before wing forward Eoghan Callaghan dispatched past Deividas Uosis to leave the deficit at 5 points.

This second attempt at a comeback from Louth was quickly squandered through quick points from Friel and Clifford midway through the second half.

David Clifford and Brian Friel both had inspirational second half performances as Kerry looked in cruise control late on as Clifford capped on the scoring getting his ninth of the afternoon as Kerry ran out 1-22 to 2-09 winners in this quarter final tie.

Report By Jason O’Connor for GAA.ie

While not a vintage display Kerry won a 22nd consecutive game at Minor level to reach Croke Park once more. Louth managed to find their way through the Kerry defence on two occasions for goals although they would still lose out by 10 points in the end.

1-6 in a strong period between the sixth and the 15th minute was a big factor in Kerry’s win as team captain David Clifford finished with nine points (three frees) in their win.

Donnachadh O’Sullivan scored Kerry’s goal in the eighth minute to put them 1-3 in front before Louth registered their first score a minute later but it was the switch of Brian Friel to centre-forward along with the prowess of Diarmuid O’Connor and Barry Mahony at midfield that were key factors in Kerry’s win.

Louth had to rely on Ciaran Keenan and John Gallagher for inspiration and both were involved in the Leinster side’s first goal right before half-time. Gallagher took advantage of a lapse in the Kerry defence to find Keenan who buried the ball past Deividas Uosis to make the half-time score 1-11 to 1-5 for the Kingdom.

Kerry restarted with the first three points of the second period but despite a black card for Louth’s Conor Morgan, his replacement Conor Nicholson was on hand to give Eoghan Callaghan the pass for Louth’s second goal in the 39th minute as the score looked interesting at 1-14 to 2-6. The Munster Champions weren’t panicking however as Fiachra Clifford put over two patient points in sending Kerry back on their way to another tilt at the Tommy Markham Cup.

The Kerry Minor Football Team to play Louth in the Electric Ireland GAA All Ireland Minor Championship Quarter Final at O’Moore Park, Portlaoise on Saturday next is unchanged from the side that defeated Clare in the Munster Final.

In the Subs, Cathal Ferriter returns from injury.

The team is as follows:

The team contains just four of the side who played in the All Ireland Minor Final last year – Michael Potts, Diarmuid O’Connor, Brian Friel and David Clifford.

Potts, together with Chris O’Donoghue, Cian Gammell, Niall Donohue and Donnchadh O’Sullivan, were members of the St Brendans College Hogan Cup winning side this year.

Kerry Minor footballers travel to Portlaoise on Saturday to play Louth in the Electric Ireland Minor Football Championship quarter final tie. So far this year Kerry have accounted for all opposition that has come their way pretty convincingly and the 2-17 to 1-10 defeat of Cork in Páirc Uí Rinn was the most impressive display by them.  Chris O’Donoghue and Eddie Horan have held the defence together well from the central positions, and Diarmuid O’Connor has put the experience gained last season to good use around the middle of the field. Up front,  Donal O’Sullivan has been the perfect foil for David Clifford in a forward line that no defence has managed to hold thus far.

Louth accounted for Laois, Offaly and Wexford  before going down to Dublin by thirteen points in the Leinster final a game in which they conceded two early goals.  We will have to wait for Saturday to see what type of opposition  they will pose for Kerry but no doubt, Kerry manager Peter Keane will have his charges well forewarned of the challenge facing them.

The game has a throw-in time of 1:15 and will be refereed by Martin McNally of Monaghan. The winners of this game will play the winners of the quarter final tie featuring Galway and Cavan. The two remaining quarter finals are between Leinster Champions Dublin and Clare, who were heavily defeated by Kerry in the Munster final while Ulster champions Derry play Sligo.