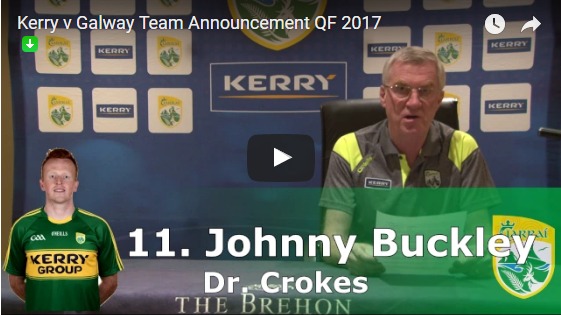 The Kerry Senior Football Team to play Galway in the All Ireland Senior Football Championship Quarter Final in Croke Park on Sunday next shows two changes in personnel from the side that defeated Cork in the Munster final;

Jack Barry comes into midfield in place of Anthony Maher and team captain Johnny Buckley starts his first game of the season; he is named at centre forward in place of the injured Kevin McCarthy.

In the substitutes list, Shane Ryan is named as the new sub goalkeeper, Jack Savage returns from illness and Brian Ó Beaglaoich also returns to the match day squad.

The team captained by Johnny Buckley is as follows:

Additional Members of the Kerry Panel: