You are here: Home/ News/ All Ireland Quarter Final Preview 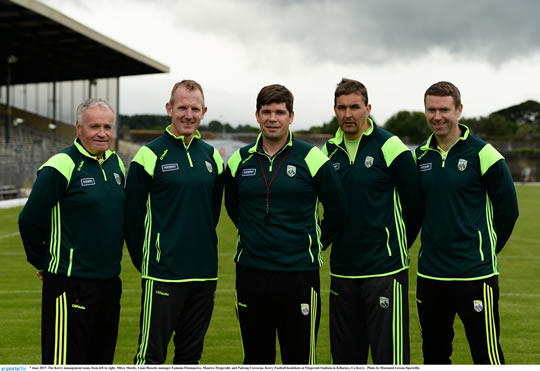 By Diarmuid Kearney and Samual Mansfield

Kerry’s traditional appearance in an All-Ireland quarter final continues  as the Kingdom will face Connacht runners up Galway in Croke Park this Sunday July 30th hoping to make their 5th Semi-final in a row with a 2 pm throw in.

The “Old Order” as many have stated has been turned on its head this year with this young Galway team, Division 2 champions and runners up in Connacht, falling just short of the fairy-tale but it looks like Gary O’Donnell has unearthed something special in the west.

Beating last year’s All-Ireland runners up Mayo by a single point in a thriller at Pearse Stadium in the Connacht championship semi-final, Galway are a side that deserve a lot more credit than they have received in recent years.

Defeat to Roscommon in the final however was a major setback but the two week break seemed to benefit Galway as a 4-17 to 0-14 mincing of Donegal in last Saturday evenings 4th round qualifier, leaves the Tribesmen in red hot form ahead of playing Kerry this weekend.

Kerry and Galway have a great history against each other playing out some of the classics of the sport. 2014 was the last time the sides met, with Kerry defeating Galway by 7 points putting them well on course to the Kingdoms 37th All-Ireland win.

Strangely enough it was also in a quarter final that they last played each other with a subsequent semi final against Mayo adding even more of an odd flavour, Kerry could play the exact same route from the 2014 final should they beat Galway and Mayo win their quarter final against Roscommon.

2001 was Galway’s last All-Ireland win beating Meath in the final on a score of 0-17 to 0-08 with Padraic Joyce, who scored 10 points in the final, the tribesmen's main man that year as he scored 3-45 in the championship and winning that year’s footballer of the year as well as an All Star. Now in 2017 Damien Comer and Sean Armstrong will be hoping to replicate Joyce and guide their side to another win.

Since Galway’s 2001 win, Kerry have had the better success rate of the two sides, appearing in 10 All-Ireland finals and winning five of those. Galway have had varied form and at times lacklustre runs beyond the provincial championship.

Failing to get past the quarter-finals since 2001 and also having failed to make the All-Ireland final series on 9 separate occasions, Gary O’Donnell will be hopeful his young side can change the “Old Order” and knock out one of this year’s hot favourites in the Kingdom.

Both sides are expected to be named Friday evening around 8pm, with tickets available at all the major outlets.

Paul Geaney: Now 26, Geaney has really cut his teeth in a Kerry shirt since his debut in 2013, playing a starring role in the Munster final win over Cork scoring 1-5. Last year’s All Star corner forward is one of Kerry’s main danger men in front of the posts and can be a threat wherever he finds himself on the pitch.

Mark Griffin: Kerry’s number 3 since 2016, the St Michaels-Foilmore man has been in the deep end of dealing with some dangerous full forwards like Paddy Andrews, Sean Cavanagh and Michael Murphy just to name a few. This weekend he will have another tough battle facing Damien Comer who is quickly establishing himself as one of the best in the country this year.

Damien Comer: The aforementioned Comer is one of the best young up and coming players of the year. Scoring 1-7 in the league campaign Comer is a prolific forward and can score from anywhere should he be given the space.Mark Griffin will be his direct opponent this weekend.

Sean Armstrong: A wily veteran of the game, Armstrong at 31 is still as dangerous as when he formed a devastating partnership with Michael Meehan in his Under 21 days. Reaching the end of his stellar career he would love nothing more than to add a senior All-Ireland medal to his collection.

Both are top quality midfielders and can be huge influencers on how their side performs with each operating a different style. Johnny Heaney was the star man as Galway brushed past Donegal last Saturday scoring 2-2 from midfield. Apart from scoring, the 6ft forward turned midfielder is dominant in the air and will prove a problem for the Kerry kick out strategy. Standing alongside Heaney will be the 6’3” frame of David Moran. The All Star midfielder is one of the country’s best and has stepped in nicely to the boots his father Ogie left behind when he retired in 1987. Moran is phenomenal in the air and when he gets the option, can be a prolific sharpshooter, his point in the Allianz league final win being one of his best yet. These two men in our opinion can be huge boosts to either side should they perform at their highest of levels.

Students at IT Tralee

Check us out on Social Media

Kerry and Galway footballers renew an age old rivalry when the sides meet in the quarter final of the All Ireland championship at Croke Park on Sunday next, a game that has a 2pm throw-in. These two GAA strongholds meet all too infrequently in championship and the healthy rivalry that exists between the counties goes back to the late thirties and early forties when the sides met four times in All Ireland finals with Galway getting the better of the Kingdom after a replayed ’38 final and Kerry recording victories over the Tribesmen in ’40 and ’41.  However the late ‘50s and mid ’60s will be fondly remembered by the older followers of the maroon side especially. It will be recalled that while Kerry were victorious in the 1959 final and the semi final of the following year, Galway reigned supreme in the mid ‘60s inflicting three championship defeats on the Kingdom in the ’63 semi final and in the finals of ’64 and ’65 as the Tribesmen went on to complete a 3-in-a-row of titles. There was also a “Home” League final between the sides in ’65 which Galway also won. That era saw such household names such as the “terrible twins” Stockwell and Purcell”, Mick O’Dwyer and Mick O’Connell immortalised in the broadcasts of that genial commentator Micheál O’Hehir.

In more modern times, with the exception of the classic draw and replay between the sides in 2000 when the likes of Seamus Moynihan and Padraig Joyce enthralled the GAA world, the sides have not met that often despite the advent of the qualifiers. There was of course the amazing quarter final of 2008 played in a second half deluge and just three years Galway gave Kerry enough of it for a long time before the Kingdom eased their way to a seven points victory.

All of that brings us to the modern day standard bearers of the famous green and gold and maroon jersies. Kerry emerged from what was a moderate League campaign to down the Dubs but we all know that League and Championship are worlds apart as Kerry’s form when defeating Clare after a struggle in the first round at the start of June is testimony to. On the other hand, Kerry’s form in the Munster final when easily taking care of the Cork challenge may have to be looked at even more favourably when the Rebel’s display against Mayo last weekend is taken into account.  With the exception of Bryan Sheehan, who suffered a re-occurrence of a hamstring injury picked up in training, Kerry are reporting a clean bill of health with goalkeepers Shane Ryan (Rathmore)  and Shane Murphy (Dr Crokes) coming into the panel in place of Brendan Kealy who has opted out of the panel for the time being at least.

Galway, as they had done last season, got the better of Connaught rivals Mayo but then went down badly to Roscommon on home soil in the provincial final, a game the Rossies bossed from start to finish. The Tribesmen regrouped however after that display to rout a very disorganised Donegal side last weekend, scoring four goals in the process and that victory is sure to be a major confidence booster to Kevin Walsh’s charges.

Galway have always been known as a “footballing” side and no doubt that should both suit Kerry and make for a good encounter. The experienced Meath official David Coldrick will be the man in charge. Patrons will also be able to see the current well being of both Roscommon and Meath who meet in the second quarter final at 4pm. The two winners on Sunday will meet in the first All Ireland semi final on August 20th.

The Kerry team will be named on Friday evening at 8pm and will be posted on the Kerry GAA Website.

Tickets are already on sale for the All Ireland Quarter Final double bill in Croke Park on Sunday when Kerry play Galway at 2pm and Roscommon play neighbours Mayo at 4pm. The following are the Ticket prices:

Purchase full price tickets and get rebate of €10 with valid I.D. at Block D, Stiles 1 to 5 in the Cusack Stand (Rebate can only be claimed on entry into the stadium via Block  D)

Tickets are now available to purchase from the Kerry GAA Store in Killarney, and participating Centra and Super Valu stores around the County including all Garveys Supervalu Stores and via tickets.ie Tickets will be available for sale from the County Board Office, Austin Stack Park on Thursday (2pm to 5:30pm) and Friday (12 noon to 4pm).