Kenmare District are County U21 Champions

You are here: Home/ News/ Kenmare District are County U21 Champions

Kenmare District are County U21 Champions 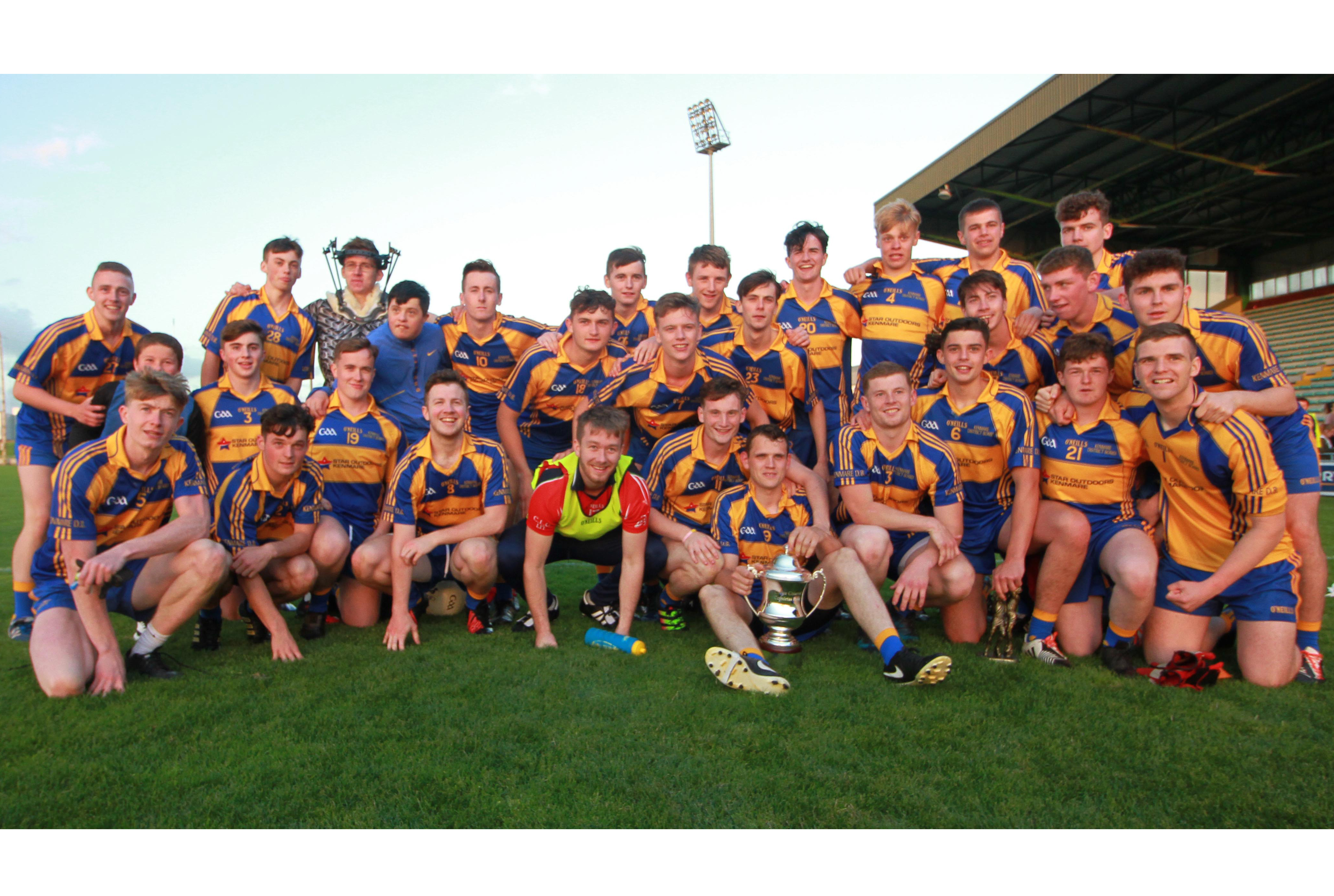 Kenmare District edge out Mid Kerry to take Under 21 Title

All the excitement in this well contested Acorn Life County Under 21 final was crammed into the final quarter as Kenmare District survived a ferocious fightback from Mid Kerry to win their second title in four years at a cool and windy Austin Stack Park last evening. The winners had by far the better of the exchanges during the first half despite playing against the elements and they led by a substantial seven points at the break. However Mid Kerry laid siege to their opponent’s goal during the third quarter and had the deficit down to three points at the three quarter stage but Kenmare were just about beginning to weather the storm  with a point from Stephen O’Sullivan before there was a 12 minute holdup due to an unfortunate injury to a Mid Kerry player.

Four minutes after play resumed Mid Kerry were handed a lifeline when they were awarded a penalty for a foul on David Costello but Liam Carey somehow managed to send the kick well wide of the posts. It was only a momentary let-off for Kenmare District as Mid Kerry laid siege to their goal – Caolim Teahan kicked two points in quick succession and Gavin McKenna another but Kenmare recovered with two points from Man of the Match Killian Spillane from a free and play. Niall O’Connor pointed a free for Mid Kerry and Daniel MacBeth had his shot for goal blocked down as Mid Kerry turned the screw and in a last ditch attack with the seconds winding down Tommy Cahill cut in from the left and sent a screamer just over the Kenmare District crossbar. It was to be the last action of the game however as time finally ran out on the losers.

Kenmare Disrict, , who lined without Kerry senior panellist Sean O’Shea,  had taken the game to their opponents from the start with Killian Spillane, Stephen O’Sullivan and Tadhg Siochrú very prominent and they had an unanswered 4 points on the board inside the opening five minutes courtesy of 2 from Siochrú and 1 each from Spillane and O’Sullivan. Niall O’Connor opened Mid Kerry’s account in the 8th minute, replied to by Patrick O’Shea but then David Hallissey had his palmed effort taken off the line by a Mid Kerry defender when he should have goaled. Mid Kerry came more into the game as it progressed but they could get no change out of a superb Kenmare District half back line despite Niall O’Connor and Caolim Teahan adding points to leave the score 5 to 3 at the end of the first quarter.

Killian Spillane added a point at the other end and then David Hallissey was put clean through after great work by Spillane and the captain made no mistake from close range in the 20th minute. In the remaining time in that half Kenmare Dist outscored their opponents by 3 points to 2 and Niall O’Connor’s angled shot was taken off the Kenmare line  to leave the half time score 1-9 to 0-5 in favour of the winners who had wind advantage to come.

Mid Kerry had rang the changes just before the interval introducing Tommy Cahill and Jonathan O’Sullivan and they then moved Mike Breen to midfield with Cahill and his piercing runs had Kenmare Dist under pressure right from the restart. Niall O’Connor, O’Sullivan and Liam Carey added three quick points but Stephen O’Sullivan replied at the other end to leave five between the sides and then Caolim Teahan, who had an outstanding second half, and Niall O’Connor, added points with Stephen O’Sullivan again replying to leave the score 1-11 to 0-10 before the injury forced the game to be stopped while the ambulance crew treated the injured player.

Crucially Kenmare District were always able to hit back with vital siege lifting scores right through that second period and Mid Kerry were never able to draw level despite having enough possession to do so.

Teams are named for Under 21 Final

Mid Kerry and Kenmare District contest the Acorn Life Under 21 Football Final on this Wednesday evening at Tralee’s Austin Stack Park, a game that will throw in at 7:30pm.Both of these sides have tasted victory in this grade in the past few years; In 2013 Mid Kerry defeated St Kierans and the following year it was Kenmare District’s turn when they also defeated St Kierans in a game that will be remembered for a last minute winning penalty by Brian Crowley.

Mid Kerry have been the more impressive side over the last few weeks simply because they played a game more than their rivals defeating An Ghaeltacht  and scoring six goals in the process before accounting for Dingle by six points in the quarter final and then having a very impressive victory over East Kerry in the semis with eleven points to spare. Former Kerry Minors Mike Breen and Liam Carey, along with David Costello are players to watch out for.

The fact that a divisional side such as Kenmare District got a walk over in the opening round did not help their cause and they were fortunate to get the better of a plucky Spa side in the Quarter finals by the minimum margin. They did improve to defeat Dr Crokes in Kenmare in the semi final where their big players such as John Mark Foley, Sean O’Shea and Killian Spillane were very much to the fore.

This is a game that has all the ingredients of being a thriller and no doubt both sides will want to become the first winners of the James Coffey Perpetual Cup, a trophy presented to the County Board aby the Coffey family in conjunction with the Laune Rangers club at a function on Friday evening last. James, or Jimmy Coffey as he was probably better known, served in many capacities for his beloved Laune Rangers over many years and was also secretary of the Mid Kerry Board for all of seventeen years before becoming chairman for another seven year period. Jimmy served as joint treasurer of the Kerry County Board from 1973 to 2003 and it is indeed very fitting that the new cup should perpetuate his memory.

The weekly Jackpot of €20,000 continues to be an elusive target for Kerry GAA Lotto members. James O’Sullivan (USA) and the Telecommers (C/O Mike Carroll) won a pair of tickets each to see Kerry play Galway.

Next week's lucky dip prize is a kit bag and Kerry a GAA tracksuit.
You can buy your yearly ticket for €100 or three lines for Monday night's draw for €5. Buy online by clicking here now  or in the Kerry GAA Store, Killarney

A new trophy is to be presented to the winners of the County Under 21 Football Championship in 2017. Laune Rangers, in conjunction with the Kerry County Board and the Coffey family will present the James Coffey Perpetual Cup in honour of the late James Coffey who of course was a legendary administrator with both club and county being a joint Treasurer of the County Board for many years.  The official launch will take place in the J.P. O'Sullivan Park in Killorglin at 8.30pm on this Friday 21st of July.

The winners of the new trophy are going to be either Kenmare District or Mid Kerry who qualified for the final by overcoming Dr Crokes and East Kerry respectively in the Acorn Life Under 21 semi finals on Thursday evening last.

Mid Kerry defeated East Kerry by 3-15 to 1-10 in Austin Stack Park and the winning margin was every bit as emphatic as the scoreline would suggest. Displaying by far the better team work, Mid Kerry dominated proceedings for about three quarters of the game with impressive displays from Acorn Life Man of the Match Liam Carey and David Costello up front who contributed 2-9 between them. Despite conceding an early goal to Ian Roche, Mid Kerry led by 2-8 to 1-2 at the break thanks to goals from Liam Carey and Darragh Coffey within a minute of each other just before the break. Eight minutes into the new half Mid Kerry more or less secured victory when David Costello struck for their third goal.

In the other semi final, Kenmare District had a 2-18 to 3-11victory over Dr Crokes in Kenmare. Dr Crokes were in command early on and the Killarney side led by 3-3 to 0-4 at the end of the first quarter following goals from Paul Clarke, Adam and Mark O’Shea. Sean O’Shea and Killian Spillane helped bring Kenmare back into the game and Spillane’s goal left just three points between the sides at the break, 3-7 to 1-10.

In the second half the District side really took over with Acorn Life Man of the Match John Mark Foley in fine form but the sides were still on level terms with ten minutes to go until the killer blow came when Kevin Price finished a loose ball to the Crokes net.

The under 21 Final will be played on Wednesday July 26th at a venue to be decided.