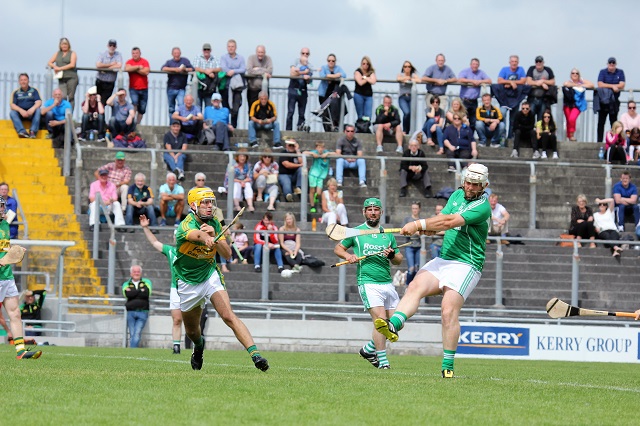 In a game that will be best remembered for the high level of marksmanship, particularly from Ballyduff’s Padraig Boyle, Lixnaw it was who secured themselves a semi final place following a fine second half performance.

Ballyduff got the better start with three points in the first five minutes but in the 10th minute James Flaherty got in behind their defence to score Lixnaws first goal and the sides were on level terms at the end of the first quarter 1-3 to 0-6. Michael Conway added two points and then Shane Conway availed of a mixup in the Ballyduff goalmouth to put his side 2-5 to 0-7 in front by the 22nd minute. Ballyduff – and the game – needed a goal and Padraig Boyle supplied it when he finished to the net after Gary O’Brien came in along the endline two minutes later. At the break it was 2-8 to 1-9 for the winners.

The sides swapped points three times on the resumption and then in a good spell for Lixnaw, the winners scored 1-3 without reply, the goal from Jason Wallace after the ball broke behind the Ballyduff cover at the three quarter stage to put Lixnaw 3-14 to 1-12 in front. Padraig Boyle from play and placed balls did his best to stem the Lixnaw tide but even his outstanding contribution of 1-14 (7 frees, 2 65s)was not enough to prevent Lixnaw getting a semi final place. Michael Conway with 10 points (7 frees) was Lixnaw’s chief marksman.

Abbeydorney knocked Ballyheigue out of this year’s championship and secured themselves a Round 3 place following a six points winning margin over Abbeydorney at Austin Stack Park today. With James O’Connor in fine form the winners got off to the perfect start leading by 1-4 to 0-1 at the end of the first quarter with O’Connor helping himself to 2 points and Niall O’Mahony latching onto a loose ball to score the goal in the 13th minute.  Ronan Donovan found the net six minutes later after Nigel Roche went short from a free and O’Dorney went on to lead by 2-7 to 0-1 before the seasiders upped the tempo with three points from Philip Lucid, Adrian Flahive and Pa Regan to bring their total to 0-4 at the break with Lixnaw having 2-8 to their credit.

Four points from Nigel Roche and two in reply from Philip Lucid saw the winners lead by 2-12 to 0-6 by the end of the first quarter but in fairness to Ballyheigue they did not throw in the towel and they hit 5 points on the trot to put a more respectable look on the scoreboard and in the process restore their pride but Abbeydorney it is who qualify for Round 3.

At the second time of asking St Brendan’s finally overcame Causeway to progress to Round 2A  of the Garvey’s Senior Hurling Championship but not before they were absolutely put to ‘the pin of their collar’ by an opposition who were reduced to fourteen players for the last twenty minutes or so of this entertaining replay.

Aided by the breeze in the opening half Sean Leahy pounced for a well taken goal to give Causeway the perfect start.  Keith Carmody added a point but Brendan’s responded with four points in a row from to leave the sides level after eight minutes.  Then in the 14th minute, corner forward, Stephen Murphy, struck for Causeway’s second goal after a mixup in the Brendans defence.

Causeway’s best period of the game followed with Mark Murphy, Thomas Casey, Anthony Fealy and Paul McGrath (free) all finding the range and Tadhg Flynn did his bit at the back  turning  a Tom Moloney effort out for a ‘65’ in added time.  John Egan kept St Brendan’s in touch with some excellent points both from play and placed balls and Causeway led by four points at the break, 2-5 to  0-7.

Causeway introduced Brandon Barrett for the start of the second half and he extended their advantage to five points.  The second half was ten minutes old before Brendan’s grabbed their first score but then two points inside a minute from Egan narrowed the gap to three.  Then in the 42nd minute Causeway’s big full forward, Sean Leahy, received his marching orders after picking up a second yellow card.  Still it took a double save by Brendan’s goalie, Darren Delaney, in the 43rd minute to prevent Causeway from increasing their advantage.

An inspirational point from Darren Dineen, from over 90 metres in the 44th minute left just two points separating the sides but fourteen man Causeway continued to put up fierce resistance.  Paul McGrath and Egan swopped points from placed balls and a point by Brendan’s midfielder, David Griffin, in the 55th minute cut the deficit to the minimum.  Another Egan point from a free, his eight score of the evening, in the 57th minute put the sides on level terms for only the second time.

Finally, though, in the 60th minute wing forward Tim Hannafin struck a ground shot to the net to secure victory.

Brendan’s now meet Kilmoyley in round 2A of the Championship on Saturday July 29th and on the same evening Causeway will face Crotta O’ Neills in round 2B.