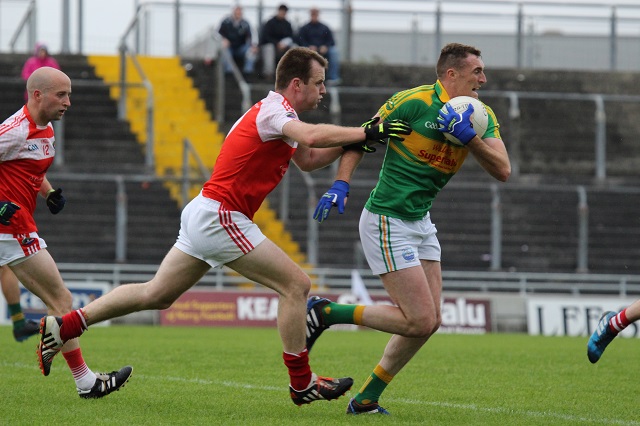 This thriller in Austin Stack Park was a throw back to an era not so long passed with neither a blanket defence nor a sweeper on view as two sides slogged it out on the scoreboard with East Kerry coming from 10 points down in the first half to rescue the game with a stunning goal in the 63rd minute to force extra time and then Minor starlet David Clifford made a cameo appearance in the second period of extra time to bag a goal from his one touch of the ball and effectively clinch victory for his side.

It was a victory that did not look possible for the Eastern side at periods during the first half dominated by St Brendans who were a goal up inside 30 seconds when Shane O’Connor netted. It should have been two a few moments later but Michael Griffin was just wide of the post. With Shane O'Connor, the Barrys Jack and Andrew and David O’Callaghan to the fore, St Brendans went on to lead by 1-4 to 0-5 by the 12th minute before O’Connor had his second major after a great passing move. Dara Roche had a shot taken off the line at the other end and Colin Myers saved brilliantly twice, first to deprive Shane O’Connor a hat trick and then Kevin Shanahan’s follow up. The goal St Brendans were threatening did come however when Ivan Parker cut in from the right in the 28th minute and two minutes later David O’Callaghan had the ball in the net for a fourth goal to leave 10 points between the sides. Jack Sherwood, who was to play a leading role in events as the game progressed,  added what seemed at the time to be two token points for East Kerry before the break to leave the interval score 4-6 to 0-10 in favour of St Brendans. The likes of Jeff O’Donoghue and Dara Roche had kept the scoreboard ticking over for East Kerry in that half.

With Jack Sherwood and Dara Roche in fine form, East Kerry got down to business straight on the resumption and outscored their rivals by 6 points to 2 in the first 7 minutes of the half to reduce the deficit to 4 points but then St Brendans replied with 4 points on the trot, including 2 from Ivan Parker,  to double their lead by the three quarter stage; 4-12 to 0-16.

Roche and Kevin Shanahan swapped points before Jack Sherwood goaled in the 52nd minute to leave 5 between the sides 4-13 to 1-17.Brian O’Donoghue and Kieran Murphy narrowed the deficit to a goal with time running out and three minutes into injury time, a bout of patient passing by East Kerry that seemed to be going nowhere ended with a tremendous shot to the far corner from Fintan Coffey to tie the scores and send the game to extra time; 4-13 to 2-19.

The sides swapped points during the first period of extra time with St Brendans emerging a point to the good 4-16 to 2-21 and still looking the most likely to succeed.

The sides had swapped points once again as we headed into the final period and then Kerry Minor, David Clifford who had just been introduced goaled with his first touch to put East Kerry ahead for the first time and when Dara Roche and Anthony Kennedy followed with points the game had finally been decided.

West Kerry came good in extra time to claim a Quarter final place and dismiss a Legion side who were shaping like winners for a lot of the game.

With Conor Keane outstanding, Legion got the better start and had three points on the board in the first four minutes with Keane supplying two of those. West Kerry settled and had four points on the trot with Dara Ó Sé getting a brace but the sides were on level terms on 5 points apiece at the end of the first quarter with Conor Keane doubling his tally of points. Tomás and Ogie Ó Sé added points for the West but Jamie O’Sullivan and James O’Donoghue with an effort that should have been a goal responded as the game opened up. Further points from play and a free by Conor Keane saw Legion retire at the break a point to the good, 9 points to 8 and West Kerry bemoaning the fact that they hit nine wides during the half.

Colm Ó Muirceartaigh and Tomás Ó Séput West Kerry in front on the restart but Keane equalised in the 40th minute at which stage the sides were level, 10 points apiece. The twin threat of Keane and O’Donoghue put Legion two clear but the game was turned on its head in the 51st minute when Eanna Ó Conchúir, Declan O’Sullivan combined to put Dara Ó Sé through for a goal the ball being well saved initially by Brian Kelly. Legion, with Jamie O’Sullivan kicking two good scores from long range fought back well to level the game and in the 30th minute O’Sullivan put Legion ahead only for Sean Micheál Ó Conchúir to equalise from a pressure free in the 64th minute to force extra time and  leave the score reading 1-13 for West Kerry to 0-16 for Legion.

The sides swapped two points apiece in the first period of extra time but West Kerry had by far the better of the final period with Dara Ó Sé (2) and James Crean pointing and Legion had one last chance when Denis Sheahan shot low and hard but just wide for a fruitless “45”.

South Kerry pulled away in the third quarter of this lacklustre Garveys Superval Senior Football  Championship Round 3 game at Tralee’s Austin Stack Park this afternoon to claim a deserved place in the quarter finals against a Dingle side who were disappointing on the day .

The winners opened the scoring in the first attack through Breándán Kelliher but they were not to score for another twenty minutes . Bryan Sheehan equalised with a great long distance point in the 4th minute but that was his final act in the game as he limped off injured straight away. Still South Kerry made light of his absence hitting another five points without replywith Paul O’Donoghue and Ronan Hussey particularly effective up front. Barry O’Sullivan saw a great shot go just wide of the post for Dingle and Padraig O’Sullivan saved well from Paul Geaney but at the other end Ronan Hussey was on a 3 to 1 inside the Dingle defence but shot tamely wide when an offload would surely have brought a goal. In the last ten minutes of the half Paul Geaney tapped over three close in frees and the scoreboard looked healthier for Dingle at the break with South Kerry leading by just two points 6 to 4.

Paul Geaney and Dara O’Sullivan soon had the sides on level terms but with Killian Young, Brendan O’Sullivan and Ronan Hussey to the fore, South Kerry began to take a grip on the game and led by two at the three quarter stage 10 to 8. Graham O’Sullivan, just after he had pointed following a great pass from Killian Young, had his goal bound shot save at the expense of a 45 which Paul O’Donoghue converted and after Dara O’Sullivan replied, Ronan Hussey and Killian Young pointed to leave four points between the sides. Two minutes from time Paul O’Donoghue was hauled down in the square and Ronan Hussey gave Gavin Curran no chance from the penalty to copperfasten victory for the southern standard bearers.

Kenmare’s good form in championship games continued this weekend when they defeated Feale Rangers in Round 3 of the Garveys Supervalu senior football championship. Kenmare were always in control of this game in Fitzgerald Stadium with Paul O’Connor and Sean O’Shea leading the scoring for them.  Conor Cox was accurate as ever for Feale Rangers who trailed by 9 points to 5 at the break. The North Kerry side did reduce that deficit to two points by the 50th minute but then points from Sean O’Shea,  Paul O’Connor and Kevin O’Sullivan put daylight between the sides once more.

So the Round 3 winners, Kenmare Shamrocks, West Kerry, South Kerry and East Kerry are in the draw for the quarter finals where they will be on one side of the draw against Round 2A winners Dr Crokes, Kerins O’Rahillys. Austin Stacks or Rathmore. The quarter finals depend on Kerry’s progress in the All Ireland series but it will be at least mid to late September before these games are played.