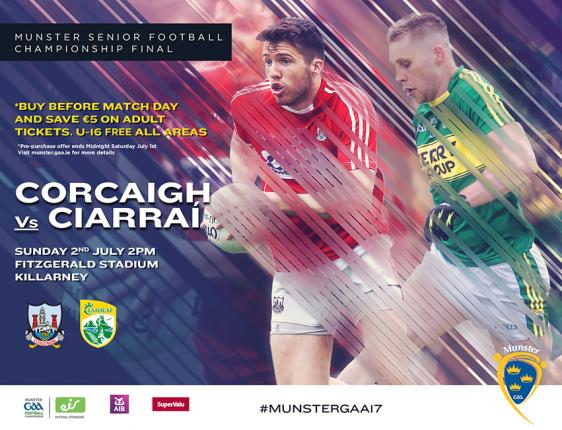 Kerry and Cork will renew their age old rivalry once more as the sides face off in this year’s Munster Senior Football Championship Final this Sunday when a near sell-out crowd is expecting a fantastic fixture in Fitzgerald Stadium Killarney with a 2pm throw-in. Kerry are looking to claim their 79th Munster crown as well as claim an astonishing 6th ‘5 in a row’ of titles. The visitors Cork are looking to claim their 38th with the last coming in 2012 where they managed to get their last win over Kerry in Championship Competition in that years final in Páirc Uí Chaoimh. The last time the Kingdom faced the Rebels was in 2015 and who can forget what happened that year as it will go down in Kerry V Cork foclóir for years to come. The first of two games was played in the glorious sunshine of Killarney before an attendance of 35,651 and needed a last gasp leveller from Fionn Fitzgerald to send the game to a replay after Barry O’Driscoll hit the net to put Cork ahead late on. The replay, two weeks later attracted 32,223 and will be remembered as that wet day in Killarney where the torrential downpour dampened both sets of supporters, but aside from the horrendous conditions Kerry were victorious that Saturday evening on a  scoreline of 1-11 to 1-6.

Both sides have had very different routes to this year’s final and many will say Cork have dodged two scares against Waterford and Tipperary winning both games by just a point. Kerry meanwhile, had 6 points to spare in their win over Clare but that victory was not without its difficulties either. In the 114 previous meetings Kerry have won 71 of those ties with Cork winning just 30, but nothing compares to when the sides lock horns in a Munster Final so do not expect Cork to be written off just yet! Cork have been labelled a team that has yet to show up in this year’s Munster Championship yet they have pulled off great comebacks to show just how Championship worthy they are.

They will need to show a different spirit however if they want to end Kerry’s 5 in a row challenge this year. Many will say that Kerry are overwhelming favourites for the weekend’s showdown but back in 2015 everyone said the same, and but for that last gasp point Cork were set to prove the doubters wrong. Still many feel this particular Cork team is not up to the standard to knock the reigning Munster Champions off their perch based on their dismal run of form so far this year in both League and Championship. Salvaging a win from the dying embers of both their Championship games and finishing 4th in theirDivision 2 outings this year (winning two games against Fermanagh and Derry) many will say they have fallen down the pecking order since their 2010 All Ireland win.

The Rebels on their day however, can be a major test for this Kerry side and the switching of the fixture from Páirc Uí Chaoimh to Killarney due to construction issues will not take away from the spirit the Munster Final offers.

The winner on Sunday will march on to the All Ireland Quarter Final stage to play the Connacht Runner Up or a Round 4A Qualifier Team, the loser has to go through the back door -  a place Kerry have not been since 2012.  Manager Eamonn Fitzmaurice will be hoping not to have to go down the Qualifier route given the strength of the counties currently waiting in the wings such as Mayo, Donegal, Monaghan and Tipperary all of whom have been knocked out of their provincial championships already.

This game is sure to be a thriller and if the Rebels wake from their slumber then once again when these old foes will serve up another thrilling instalment of this age old rivalry.

The Kerry Team will be announced at 8 PM Friday.

James O’Donoghue: Man of the Match in Kerry’s Semi Final thriller against Clare, O’Donoghue was the Catalyst behind Kerry’s fightback, the winners having been reduced to 14 men for most of the game. James showed real character in his performance that day coming up with 9 important scores to book Kerry a place in the Munster Final. Many were quick to say it was a performance similar to his All Star winning 2014 season and we hope that level of talent will be on show once more in Killarney.

Peter Crowley: Since Marc Ó Sé and Aidan O’Mahony retired, Peter Crowley has stated his claim to being one of Kerry’s best defenders, the orthodox half back has been a rock in defence and offers great pace and scoring options going forward. A candidate for Man of the Match in Kerry’s Semi Final against Clare, Crowley excelled in organising the Kerry back line to press against the Clare kickout and manage a tight shift of closing down space left after the departure of Donnchadh Walsh. Crowley could be a key orchestrator as Kerry build  from the back especially if they play tight against the Cork kick Out in midfield.

Paul Kerrigan: A veteran of Cork football, 30 year old Kerrigan is someone Kerry are all too familiar with, the All Ireland winner scored a goal in the replay of the 2015 final and since has stated his claim as one of Cork’s most key and influential forward. Kerrigan has proved crucial to Cork’s campaign this year scoring 1-03 against Waterford and 3 points against Tipperary and seems to be one of the main leaders on the team. He has came off the back of enough defeats to Kerry in the past and will not want it to happen again. On his day he is  a fantastic player to watch.

Michael Shields: Another 30 year old Cork veteran Michael Shields has been one of Cork’s finest corner back’s since making his debut in 2006. The 30 year old is a true warrior and it will be interesting to see if he will get the task of marking  James O’Donoghue on Sunday and if he does will he have enough pace to hold O’Donoghue? Sunday will tell.

Both Forwards have been the Key components to getting their side’s scores this year, and both it has to be said have gotten their sides out of some seriously sticky situations in this year’s championship. James came up with 9 points to send Kerry into the Final and really showed the 2014 championship form that day.

Kerrigan on the other hand has scored a combined total of 1-06 in the two Championship games so far, both of which Cork were on the brink of losing but instead rose from the ashes to ensure they would make yet another final.  Kerrigan and O’Donoghue are sure to make the difference in this weekend’s crucial clash and each have terrorised their respective opponents in the past.

O’Donoghue scored 1-02 in the first game in 2015 and scored just a point in the downpour replay, he also was the architect for the 2014 win scoring a personal tally of 10 points. Kerrigan is also razor sharp when it comes to taking scores, He may only have scored a goal in their last 3 meetings in Munster against Kerry but based on his form this year when shifted from a half forward to a corner forward position he can be a real menace to any defence and could easily pop up to gift the Rebels their 38th Munster Crown.

Diarmuid Kearney and Samuel Mansfield are both studying journalism at IT Tralee.