You are here: Home/ News/ Garvey's SuperValu SHC Round 1&2 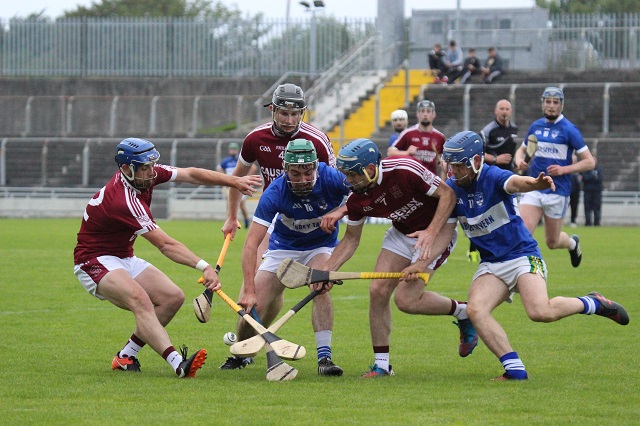 First up is the Round 1 replay between St. Brendan’s v Causeway on Saturday evening at 7.00pm and if this game is even half as good as the extra time drawn thriller between the sides then fans are in for another treat The winners here will play Kilmoyley in Round 2 with the losers facing Crotta both games on Saturday July 29th.

There will be a double bill on Sunday afternoon commencing with the Round 2B clash of Abbeydorney versus Ballyheigue at 1.45p.m with the losers exiting the championship.

It will be followed by the meeting of Lixnaw and Ballyduff at 3.30p.m. with the winners going through to the semi-final.

Round 2A (Winners Group)

Round 2B (Losers Group)

After what can only be described as a poor game of hurling, a point a minute into injury time by Mikey Boyle gave Ballyduff victory over an Abbeydorney side who deserved extra time at least for the effort they put in against the starting favourites in the final Round 1 game of the Garvey's SuperValu Senior Hurling Championship at Austin Stack Park this evening.

The story of the first half is easily told: Both sides swapped points twice in the first seven minutes and then we had to wait until the 22ndminute for the next score, a Padraig Boyle free, his second, to put Ballyduff ahead. Points by James O’Connor and a Nigel Roche free put O’Dorney a point to the good at the break; 4 points to 3. Ballyduff had amassed 8 wides by the interval; O’Dorney half of that total.

The scoring improved in the second half – it had to! Nigel Roche extended O’Dorney’s lead from a free and play but Padraig Boyle responded likewise and then the same two swapped frees to leave O’Dorney a point to the good, 7 to 6 by the 37th minute.Then a good run by Ronan Donovan ended with a penalty to O’Dorney but Ballyduff had a let off when Nigel Roche struck to the right and wide. The sides swapped points twice again with Roche picking off a lovely pointfrom play and Padraig Boyle doing likewise from distance for Ballyduff and it was 9 to 7 at the three quarter stage. Ballyduff then hit three on the trot from the Boyles , Padraig (2 frees) and Aidan but back came O’Dorney with two from James O’Connor to level it up once again. Aidan Boyle and David Egan then swapped points as extra time loomed but in stepped Mike Boyle at the death to win it for Ballyduff.

All too easy for Lixnaw with big win over Ballyheigue.

It was all too easy for Lixnaw at Austin Stack Park this evening following an 18 points demolition of Ballyheigue in Round 1 of the Garvey's SuperValu Senior Hurling Championship. Lixnaw took the game to their opponents from the start, were five points to the good in as many minutes and added six more by the end of the first quarter. Philip Lucid, by far Ballyheigue’s best player, finally opened the scoring for his side in the 18th minute from a free and added another from the same source three minutes later but at the break Lixnaw already had an unassailable lead of 18 points to 2 with Shane Conway accounting for five of those scores.Ballyheigue saw more of the ball in the second half as Lixnaw visibly eased off and Philip Lucid had two good points from play and another from a free but the sea siders had John Mike Pierce to thank for a series of outstanding saves to keep the Lixnaw forwards at bay. Lucid goaled from a free at the three quarter stage to leave the score 0-21 to 1-5 but Jason Wallace soon cut in from the right to goal for Lixnaw at the other end. Lucid then had a penalty saved by Martin Stackpoole but it mattered little as the Conways, Shane and Michael continued to find the target for Lixnaw and eventually they ended with 15 points between them , Shane accounting for nine of those from play.Scorers: Lixnaw: Shane Conway 0-9, Michael Conway 0-6 (Frees), Jason Wallace 1-3, John Griffin 0-2, Jeremy McKenna, Liam Mullins, Colin Sheehy, Ricky Heffernan, John Buckley and Conor O’Keeffe 0-1 each. Ballyheigue: Philip Lucid 1-7, 1-4 frees), Diarmuid Walsh 0-1.

Note: The final Round 1 game takes place on this Saturday evening at Austin Stack Park with O'Dorney facing Ballyduff at 5:30.The Draw for Round 2 will take place in the Pavilion immediately after this game. The replay of the St Brendans Vs Causeway 1st round game will take place next weekend along with two Round 2 games.

The remaining games in Round 1 of the Garvey's SuperValu Senior Hurling Championship will be played this coming weekend.

On Friday, 7th July Ballyheigue play Lixnaw at 7.30p.m. and on Saturday, 8th July, Abbeydorney play Ballyduff at 5.30p.m. Both games will be played at Austin Stack Park, Tralee, with extra time if necessary.

Round 2 will be played on 16th July, Round 3 on 6th August, the semi-finals on w/e 26th August and the final is scheduled for Sunday, 10 Sept.

The Round 1 Replay between Causeway and St Brendans will be played on the Weekend of July 16th along with Round 2A and 2B games.

Exact dates and times will be confirmed after the Round 2 Draw which takes place this weekend.

Without ever hitting top gear champions Kilmoyley easily accounted for Crotta O’Neills in a disappointing opening game in Austin Stack Park. The scoring was largely from frees with Shane Nolan hitting 10 points from placed balls for Crotta and Daniel Collins outdoing him at the other end with 2-9 1-8 of which was from placed balls. Collins and Nolan shared two points apiece from frees before Collin’s long range free was fumbled and crossed the line for a fortuitous goal in the 11th minute. The swapping of scores continued for the remainder of the half but a couple of good points from Adrian Royle and another from Paudie O’Connor in a rare period of scores from play put Kilmoyley 1-9 to 0-6 in front at the break.

The pattern of the second half was much the same as the first with Nolan and Collins continuing to keep the scoreboard ticking over and it was 1-13 to 0-10 at the three quarter stage. A goal from Maurice O’Connor after a good pass from Daniel Collins finally put daylight between the sides in the 52nd minute and Daniel Collins added another near the end to give the champions an 11 points victory.

A tremendous game of hurling between two committed sides gave a great start to the hurling championship at Austin Stack Park on Saturday evening. Extra time could not separate the sides and it is only fitting that both will get another bite of the cherry.

Causeway with wind advantage got the better start and a goal by Stephen Murphy when he first time a loose ball to the net had them ahead by 1-2 to 0-1 after nine minutes. St Brendans’ response was good with three points on the trot from John Egan David Griffin and Eric Leen but Anthony Fealy and Colum Harty replied for Causeway to leave the score 1-4 to 0-4 after twenty minutes. Tadhg Flynn saved well from Cian Hussey but a minute later Hussey finished a loose ball to the net and St Brendans led by 1-6 to 1-5 at the break.

The second half opened with a goal for either side with Keith Carmody shooting low from the left in the 32nd minute for causeway and Cian Hussey goaled five minutes later when his deceiving shot found the Causeway net. Brendans added three points in as many minutes and when Paul McGrath and Rory Horgan from long range swapped points it was 210 to 2-6 for St Brendans at the three quarter stage. Points from Anthony Fealy, Jason Leahy and Paul McGrath to one in reply from John Egan saw two points between the sides 2-11 to 2-9 with seven minutes to play.

Causeway then had a great chance when Anthony Fealy was fouled in the square but Colum Harty’s penalty shot was wide on the left and when the excellent Cian Hussey added a point St Brendans were three to the good and time running out. However, up stepped Stephen Goggin to pounce on a loose ball and rattle the St Brendans net to send the game to extra time 2-12 for St Brendan to 3-9 for Causeway who finished the game with 14 men.

Back to 15 for the extra time and Causeway hit two quick points but back came Brendans with three of their own to take the lead before Paul McGrath and Jason Leahy gave Causeway a 3-13 to 2-15 half time lead.

Stephen Goggin added another for Causeway on the resumption but Cian Hussey and David Griffin replied to tie the game once more and there was still time for Cian Hussey and Shane O’Mahony to swap point but the sides could not be separated and they will have to do it all again on a date to be confirmed.

The opening games in Round 1 of the 2017 Garvey’s Supervalu Kerry senior hurling championship [Corn Neilus Ó Floinn] will commence on this Saturday, 1st July with a double bill in Tralee’s Austin Stack Park. Reigning champions, Kilmoyley, play Crotta at 5.30p.m. followed by the meeting of St. Brendan’s and Causeway at 7.15p.m.

The remaining Round 1 games will be on Friday, 7th July when Ballyheigue play Lixnaw at 7.30p.m. and on the following evening, Saturday, 8th July, Abbeydorney play Ballyduff at 5.30p.m.

All games will be played at Austin Stack Park, Tralee, with extra time if necessary.

Round 2 will be played on 16th July, Round 3 on 6th August, the semi-finals on w/e 26th August and the final is scheduled for Sunday, 10th Sept.