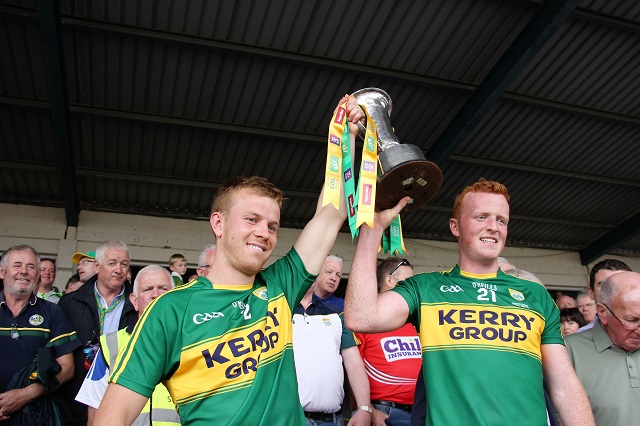 By Paul Brennan at Fitzgerald Stadium, Killarney for GAA.ie

At least the Cork crowd got seasonal weather in Killarney. That's about as much as they can take from their near annual pilgrimage to Kerry's tourism capital, but just what their footballers will take from the visit is quite another matter. The search for answers on Leeside continues.

In Kerry they have all the answers. At least with respect to the Munster Championship as the Kingdom hoovered up a fifth successive provincial title, wiping the floor with Cork in the process.

If Kerry felt they needed to put down a performance to match Dublin's annihilation of Westmeath a week earlier then they came close. And that's granting that Cork are marginally better than Westmeath.

Just what Eamonn Fitzmaurice and his players will have gleaned from another thumping of Cork is anyone's guess but one thing is certain: the age-old Kerry-Cork rivalry is dead and gone for now. Just under 32,000 spectators came more in hope than expectation of a contest but got nothing close to that.

It took 12 seconds for Paul Geaney to get Kerry off the mark, David Moran doing the approach work from the throw-in. A minute later Geaney turned provider for his cousin Mikey, and a minute on again full back Mark Griffin raided forward to tee up James O'Donoghue for his first of the day. A long afternoon beckoned for Cork.

Cork were 0-6 to 0-1 down by the tenth minute there was little evidence of a insurgency by the Rebels. In the 12th minute Ian Maguire broke the Kerry cover and bore in on goal but missed the sort of chance no Cork team can afford in Killarney.

Cork were six adrift, 0-8 to 0-2, after 18 minutes but points from Maguire, Niall Coakley (two frees) and Luke Connolly (free) kept them in contention, even if Kerry carried the greater threat, with Paul Geaney drawing a smart save from Ken O'Halloran from close range.

Tomas Clancy's 36th minute point made it 0-10 to 0-7 but then a little sequence that summed up the day. Connolly tried a Hail Mary point from over 50 metres that was way off line, but there was just enough time left in the half for Kerry to work the ball upfield and find Paul Geaney who coolly worked the space and angle to score. Cork individualism versus the Kerry collective. Cork hit and hope against Kerry precision.

The first minutes of the second half would, understandably, be crucial for a Cork team still in contention on the scoreboard but just about hanging on everywhere else. Within three minutes Kerry had scored four points, through substitute Stephen O'Brien (2), David Moran and O'Donoghue, who tidied up after James Loughrey had initially blocked his goal-bound shot.

Cork had one chance to drag themselves back into the contest but after a surging run, Clancy smacked his shot into the side-netting and the Rebels were beaten.

Donncha O'Connor carried the late fight for Cork, scoring six points in the closing quarter, but Kerry underlined their dominance when Paul Geaney bundled the ball past O'Halloran for the game's only goal, seconds after Cork defender Jamie O'Sullivan was dismissed for a black card foul.

A fifth Munster title for Kerry, then, and four weeks to prepare for an All-Ireland quarter-final where no one will fancy them. The same won't be said for Cork who go into the Qualifier draw where everyone might fancy them.

The “old order” so to speak is restored once again when Kerry and Cork go head to head in the Munster senior football final in Killarney’s Fitzgerald Stadium on Sunday next (Throw in is at 2pm). It’s two years since these sides have met in competitive action and their two meetings in 2015 to decide the Munster Championship brought a combine attendance of 68,000 to the famed Killarney venue. The pre-match expectation then, very much like it is now, was that the reigning All Ireland champions Kerry, would be too strong for the visitors but, as we all know by now, Cork did everything bar win the drawn game after putting in a tremendous second half display having been four points adrift at the break. Indeed, it took a tremendous long range point in the final seconds from Fionn Fitzgerald to save Kerry’s bacon and it was a relieved home side who faced a replay at the same venue two weeks later. On that dark and wet Saturday evening, Kerry, without ever reaching top gear, controlled a low scoring game to eventually win by five points.

Since then their paths have gone in different directions with Cork slipping to Division 2 of the League and failing to Tipperary in Munster last year. Kerry, for their part, have failed to defeat Dublin at the final and semi final stages. Cork will not be too worried about having to come to Killarney once again and their graph one would think, can only go in one direction following disappointing displays against both Waterford and Tipperary, two matches they won by the minimum score. The Rebel side did show they were a resilient bunch of players, particularly against Tipperary when they could easily have thrown in the towel following the Premier county’s late goal. They will surely take a lot of heart from their response to that setback.

Kerry’s fine victory over Dublin in the Allianz League final probably masked a few indifferent displays earlier in that competition and they certainly looked a bit ring rusty in their victory over Clare in the first round of the championship. That six points win probably flattered the Kingdom standard bearers a little though it must be remembered that they played with a man short for all of the second half. The return to fitness of David Moran since then will please manager Eamonn Fitzmaurice as will Johnny Buckley’s return to the match day squad. The fact that two or three of the younger players are pushing for places is also a boost for Fitzmaurice and players like Ronan Shanahan, Jack Barry and Kevin McCarthy will have got invaluable exposure to the atmosphere of big match day from that League final.

The Kerry management will know that a wounded Cork side will always have a kick in them and no doubt they will be very wary of a Rebel backlash following recent criticisms of their displays against both Waterford and Tipperary. Eamonn Fitzmaurice was probably happy enough coming out of Cusack Park three weeks ago, as he and his players would have known that a repeat of that performance would not be sufficient to win a Munster title – regardless of the opposition. Since the introduction of the qualifiers, Kerry have always favoured route 1 to the quarter finals and with the likes of Mayo, Donegal and Monaghan waiting in the long grass for the losers on Sunday , that direct route is even more important than ever.

The Kerry team will be announced on Friday evening and posted on the Kerry GAA Website at 8pm.