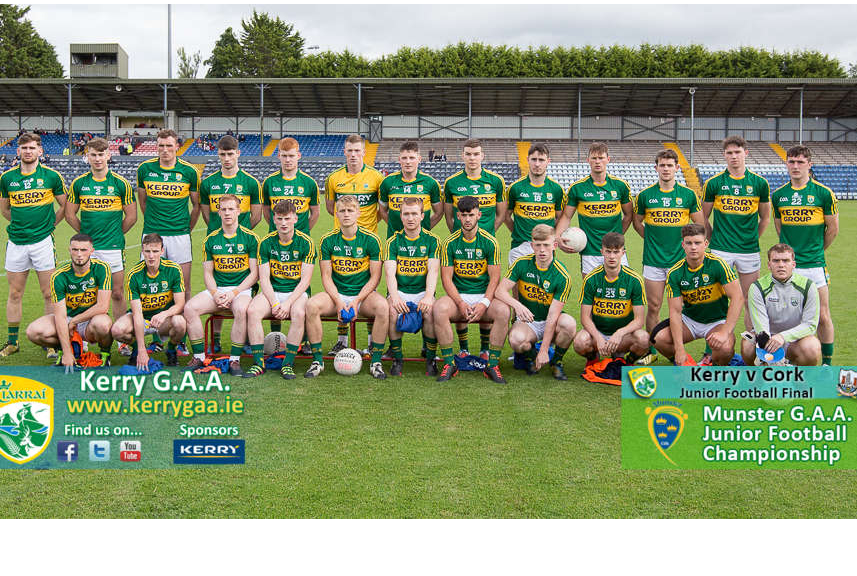 At a couple of stages during this absorbing Munster Junior Football final at Páirc Uí Rinn, Kerry seemed to be about to surrender their All Ireland Junior title but the Kingdom showed true resolve to fight back from 9 points down early in the second half and then two points down with just two minutes of normal time left to actually take the lead before a late Cork equaliser sent the game to extra time. No one was complaining however such was the standard of the fare on offer from both sides. Kerry did come good in the extra twenty minutes outplaying the home side, and while the margin of victory may have flattered them a little there could be no denying the fact that they deserved their win.

The sides swapped early points but Kerry had Tomás Mac an tSaoir to thank twice in the opening six minutes for point blank saves when Cork were threatening to over run Kerry through the centre. Kerry recovered to outscore their rivals by 4 points to 1 to take a 6 points to 2 lead by the end of the first quarter. Kerry had the better of the midfield exchanges to that point with Rob Ó Sé’s spectacular fetching being matched by the industrious Brendan O’Sullivan, however Ronan O’Toole shot powerfully to the Kerry net in the 16th minute and though Conor Cox replied immediately with a point, Cork got to grips with the game and some powerful running from the middle yielded 6 points without reply and O’Toole also sent a pile-driver off the bar in the 17th minute. Four points up, Cork were in control but points by Jeff O’Donoghue from a 50 yds free and another from Philip O’Connor seemed to have settled the visitors but Cork reeled off 3 points without reply before the break to deservedly lead by 1-11 to 0-9 at the interval. Kerry, who had never looked like scoring a goal themselves, rode their luck and Cork could have had at least two more majors to their credit at the half hour mark.

The home support in the attendance of 929 did not have to wait long for a goal however as on the restart Eoghan Buckley cut in along the endline and found the far corner and when sharpshooter Anthony O’Connor pointed soon after Cork were 9 points clear.

To their credit, Kerry fought back with some tremendous play from Ó Sé and O’Sullivan at midfield and improved play from their inside lie of Spillane, Cox and Ó Sé and after Cox and Spillane had good scores Tomás Ó Sé had his shot for goal taken off the line in the 37th minute but a minute later Ó Sé was in for Kerry’s first goal when put through by Brendan O’Sullivan.  Four points in it now with just 8 minutes gone in the half and after Jeff O’Donoghue pointed a “45” Philip O’Connor ran straight through the centre to finish to the net after a great catch by Rob Ó Sé had put him in the clear. The Kerry forward unit had been boosted by the introduction of Liam Carey who gave Kerry the lead in the 44th minute and after Cox made it 2 from a free, Cork’s Anthony O’Connor levelled it up once more with points from a free and play to leave it all to play for with 10 minutes remaining. Cork went two clear as the pendulum swung again and just two minutes remaining but two fine points from Liam Carey levelled it up once more a minute into injury time. Philip O’Connor seemed to have given Kerry the title but Killian O’Hanlon sent the game to extra time with a point in the 63rd minute to leave the sides deadlocked on 2-17 apiece.

Kerry got straight into the action at the start of the extra time with Liam Carey pointing from the throw-in and though danger-man Eoghan Buckley equalised it was to be Cork’s only score of the half. The rampant Brendan O’Sullivan and Philip O’Connor pointed and then Philip O’Connor goaled after a great run from centrefield by O’Sullivan and a minute later Kerry were in for another major when Carey’s shot was blocked on the line and Tomás Ó Sé applied the finishing touch to put Kerry 4-20 to 2-18 ahead at the short whistle.

All Kerry had to do was to mind their goal for the final ten minutes but they outscored their opponents by 4 points to 2 before Tomás Mac an tSaoir was pushed to the ground in possession and Ronan O’Toole got in for a late consolation goal for Cork.

So Kerry now play Connaught champions Leitrim in the All Ireland semi final on July 22nd.

Kerry defeated Cork by 4-24 to 3-20 after extra time in the Munster Junior Football Championship Final on Tuesday June 27th at Pairc Ui Rinn.

Click here for the full match report thanks to the Journal.ie 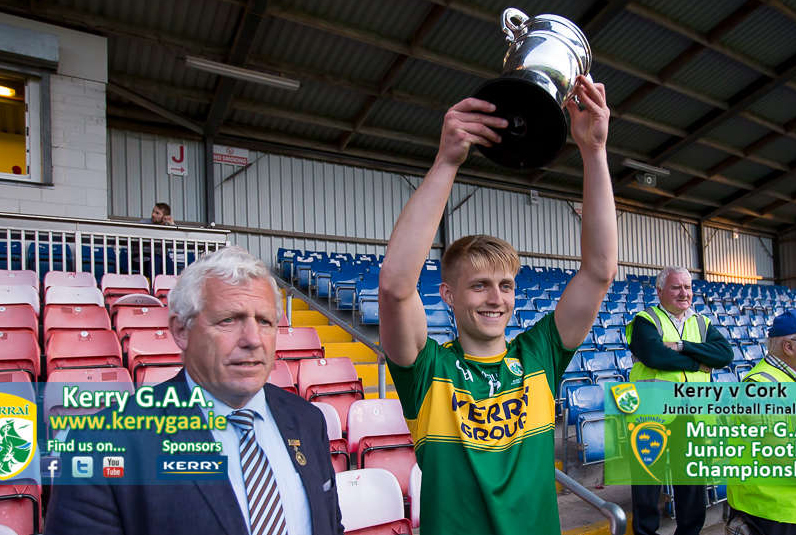 The Kerry Junior Football Team to play Cork in the Munster Junior Football Final at Páirc Uí Rinn on Tuesday evening (7:30) is unchanged from the side that defeated Limerick in the semi final. Thomas Hickey returns from injury and is included among the subs.

The team captained by Killian Spillane is as follows:

The Kerry Junior footballers are going for four Munster titles in a row when they travel to Páirc Uí Rinn on Tuesday evening to take on old rivals Cork in a game that throws in at 7:30pm.Kerry are also attempting to put three All Ireland titles  together but none of last year’s successful side are eligible this year and it has been a difficult time for new manager Jimmy Keane of Brosna -who of course was a selector last year- given the plethora of County League and Championship games over the months of April, May and June.

In the last few years the Junior side has been made up by in large of Under 23 players but this year due to injuries, exams and players going abroad for the Summer, the new management team of Keane, Pól Ó Cuinn (An Ghaeltacht), Niall O’Mahony (Spa) and John O’Connell (Tarbert) have had to call in some of the 2015 winning side to the panel the likes of James Walsh, Conor Cox, Philip O’Connor and Jeff O’Donoghue.

Some of the Under 21 panel and minors from the past few years  such as Killian Spillane, Brandon Barrett, Rob Ó Sé,  Daniel O’Brien and Tomás Ó Sé will also be in the mix and it remains to be seen if there will be any changes from the side who comprehensively defeated Limerick in their only outing to date two weeks ago. In fact both sides had big semi final victories with Cork equally impressive in their victory over Waterford a month or so ago. So at this point in time one cannot gauge how strong either side is – we will find out on Tuesday evening in Páirc Uí Rinn!

The Kerry Team will be announced on Sunday evening at 2pm.