Kerry U21 defeated by Galway

You are here: Home/ News/ Kerry U21 defeated by Galway

Kerry U21 defeated by Galway 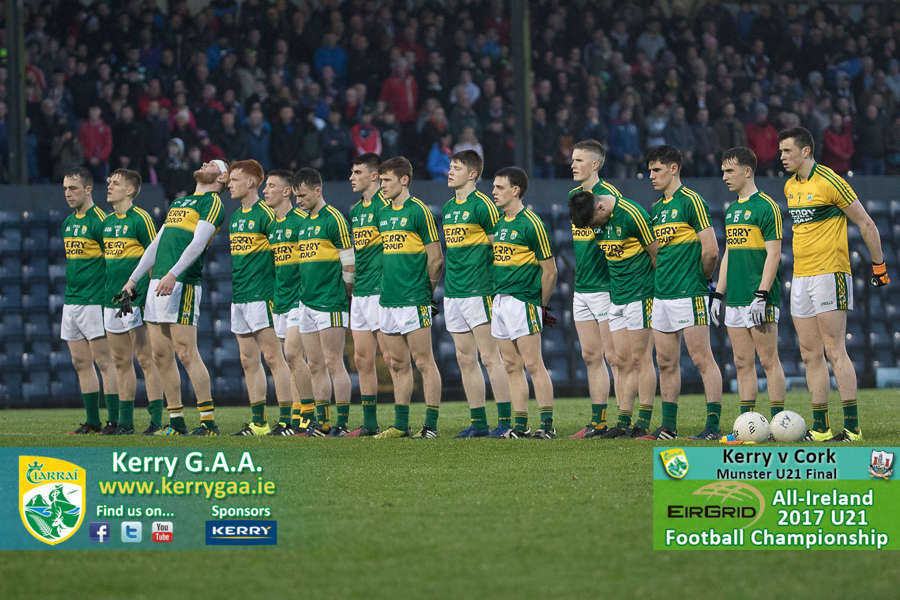 EirGrid All Ireland Under 21 Football Semi-Final

Galway stunned Kerry producing a dynamic display in Ennis to secure a deserved EirGrid All Ireland Under 21 Semi-Final victory.

Prompted by the excellent Cein D’arcy and Peter Cooke, Galway seized the initiative and were able to deal with a third quarter Kerry rally.

Having hit 37 shots during a fast and frenetic match Galway could have prevailed by a greater margin, but they still did enough to take a prized scalp.

Galway commenced the game in blistering fashion scoring 1-7 from nine attempts in the first 10 minutes.

It was a purposeful patch from Gerry Fahy’s charges, who thundered into the contest netting a sweet goal after only 24 seconds.

Cein D’arcy, Eoin Finnerty, Robert Finnerty, and Sean Kelly were all involved in a swift build up with Dessie Conneely rattling the Kerry net.

Kerry were in deep trouble, but the relocation, for a spell, of the pacy Matthew Flahety to a sweeper role was critical, while Galway, initially clinically, started to waste opportunities.

The fact that Kerry, fielding 14 All Ireland minor winners, could only muster one point from play before the break, courtesy of Killian Spillane, proved just how diligent Galway were defensively.

At the interval Galway led 1-9 to 0-4 against the raging hot favourites and an interesting second period beckoned.

Within a minute of the restart Matthew O’Sullivan bundled a disputed Kerry goal over the line and Jack O’Connor’s team were firmly back in the reckoning.

Flaherty was back operating at wing forward kicking a couple of points which narrowed the gap down to 1-10 to 1-6.

Crucially Galway landed four of the next six points with Cooke, McDaid, and D’arcy contributing handsomely edging the Tribesmen 1-14 to 1-8 in front.

Kerry’s Barry O’Sullivan was sent off in the 48th minute for a second bookable offence and Galway confidently closed out the deal.

Eoin Finnerty fashioned an opportunity which substitute Colin Brady converted for the insurance goal and while Jordan Kiely responded with a Kerry major it was merely a consolation. Galway’s decider with Dublin in a fortnight should be tasty.

The Kerry Under 21 Football Team to play Galway in the All Ireland Under 21 Championship Semi Final in Cusack Park on Saturday evening (4:30pm) shows two changes in personnel from the side that defeated Cork in the Munster Final. Team captain Brian Sugrue of Renard, injured in the provincial decider, misses the game; Tom O’Sullivan goes back to the corner, Andrew Barry drops back to the centre back position with Barry O’Sullivan coming in at midfield. Up front, Conor Geaney comes in at corner forward in place of Cathal Bambury.

The team, captained by Matthew O’Sullivan of St Michaels-Foilmoreis as follows:

With the exception of Matthew O’Sullivan, all of the side have played in successful All Ireland minor winning sides since 2014 with Sean O’Shea a member of last year’s winning side.