You are here: Home/ News/ Kerry through to Munster Minor Football Semi-Final 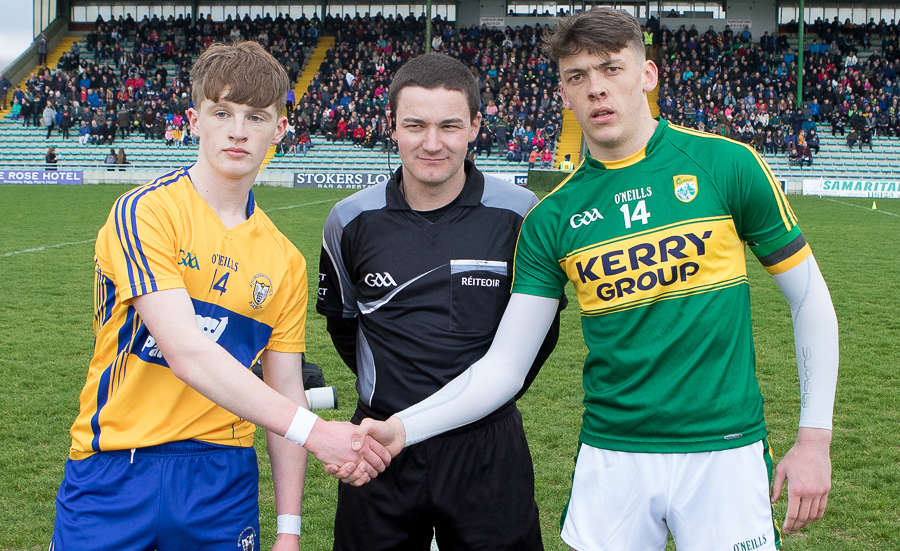 Kerry, Cork and Limerick have qualified for the semi finals, however, the exact semi final lineup will not be decided until the playoffs have been completed. While Kerry and Cork are on the same side of the Draw, repeat pairings are not allowed and if Waterford defeat Clare and then defeat Tipperary in the playoffs for instance then they would be drawn against Cork or Kerry as they have already played Limerick!

Kerry eased their way to a possible Munster Minor Football Championship semi final showdown possibly with  Cork on May 10th following a decisive victory over Clare before an attendance of 2,567 at Tralee’s Austin Stack Park this evening. , However, while there was never a hint that Clare would cause an upset, Kerry management will be far from happy with their side’s second half display when they shared the scoring with the Bannermen,  squandering numerous scoring chances in the process.

Kerry had first use of the fresh breeze that blew into the scoreboard end of the ground and they wasted very little time in getting on the scoreboard going three clear in as many minutes with the impressive Donal O’Sullivan getting two, one from play and one from a free. Two minutes later, Kerry captain David Clifford was at the end of a fine passing move to finish to the net and Kerry were on their way. On seven minutes Donnchadh O’Sullivan had a goal bound shot saved by Mark Lillis in the Clare goal but Donal O’Sullivan was on hand to finish the rebound to the net and when Fiáchra Clifford and O’Sullivan, from a free, pointed, Kerry were 2-5 to no score ahead.

Clare were finding it difficult to get past the Kerry midfield pairing of Barry Mahony and Diarmuid O’Connor whose fielding was a joy to behold but just at the end of the first quarter a high ball broke kindly for Gearoid Cahill behind the cover and he finished calmly past Deividas Uosis in the Kerry goal for Clare’s first score of the game. Normal service was resumed at the other end however as Kerry picked off a further five points during the second quarter the pick of which was a fine effort from the wing by David Clifford. At the break it was 2-10 to 1-0 for the home side.

On the resumption, Kerry took up where they left off and two quick points from David Clifford, a fine individual score from centre back Eddie Horan and another from Donal O’Sullivan had Kerry leading by 2-13 to 1-0 with 38 minutes gone. At that stage it looked like the contest was going to end in a rout but amazingly, Kerry were to go another 19 minutes without scoring. Kerry manager Peter Keane did concede afterwards that the wind was a factor but he will be disappointed by some of the wides Kerry kicked (8 in all in this half) some from very advantageous positions. In fairness to Clare they kept plugging away and their first point of the evening, kicked by Gavin Cooney in the 44th minute, was followed by four more minors, two of which were kicked by Cooney himself.

Niall Donohue finally broke the Kerry duck in the 57th minute and Donal O’Sullivan followed with a pointed free before Dermot Coughlan closed the scoring with a Clare point in the 63rd minute.

So Kerry will probably meet Cork (3-21 to 1-8 winners over Tipperary in Thurles in the other Qtr Final) in four weeks time at a Cork venue with the losers of that semi final exiting the competition.

Note: Before the game a minutes silence was observed in memory of the late Vincent Linnane who was the Austin Satck Park groundsman and the Kerry footballer’s Kitman for many years.

Kerry Minor Footballers begin the defence of their Munster and All Ireland titles when they take on Clare in the Electric Ireland Munster Minor football championship quarter final at Tralee’s Austin Stack Park on Wednesday evening at 7:00pm.

This of course is the final year of the Under 18 competition with Congress having voted to lower the minor age limit to 17 years from 2018 onwards and no doubt, given that they have won the competition for the last three years running, Kerry will want to see the competition out in style and become the first county to win the competition four times in a row.

The team picked to do duty on Wednesday evening contains just four of the side who played in the All Ireland Minor Final last year – Michael Potts, Diarmuid O’Connor, Brian Friel and David Clifford while the injured pair of Cian O’Callaghan and Cian Gammell along with Niall Donohue, Fiachra Clifford, Chris O’Donoghue and Ryan O’Neill were all part of the extended training panel last year.

It has been customary over the last few years to see success at colleges level being replicated at county level in this age group and this year is no different with the likes of Michael Potts, Chris O’Donoghue, Sean O’Leary, Donnchadh O’Sullivan, Cian Gammell and Niall Donohue , being  members of the St Brendans College Hogan Cup winning side this year.

The current squad have enjoyed a lot of success at Under 16 level in the province but there is a big step up to Minor level and hopefully, Wednesday’s game with Clare will be the stepping stone to another successful year in the grade.

The winners of Wednesday’s game will be in semi final action on May 10th while the losers will play the losers of the Waterford/Limerick game on April 19th.

Potts, together with Chris O’Donoghue, Sean O’Leary and Donnchadh O’Sullivan,  were members of the St Brendans College Hogan Cup winning side this year.

The team, captained by David Clifford is as follows: