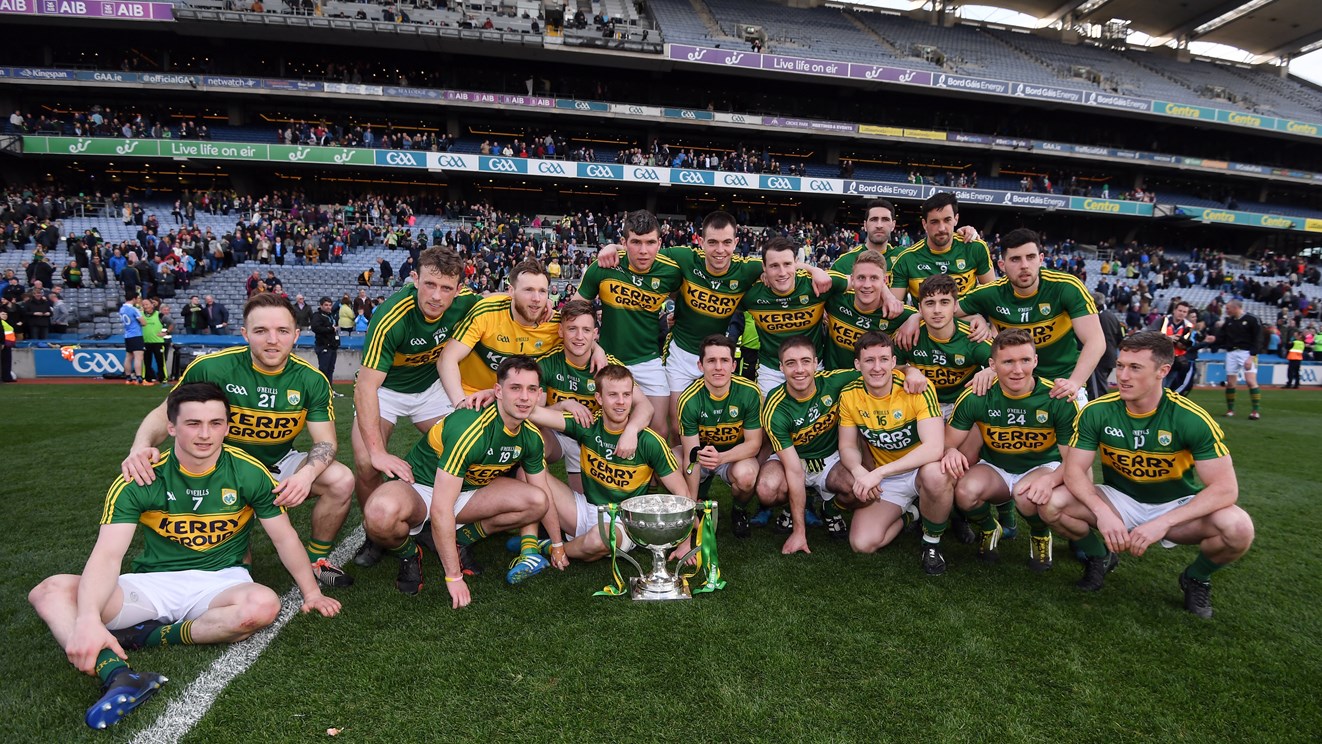 Kerry are the Allianz Football League Division 1 Champions and Dublin’s unbeaten run in the League and Championship has finally been ended after 37 matches.

A simple sentence that covers the basics, but doesn’t come close to capturing the drama of another epic contest between these two great rivals.

It all ended in a welter of excitement as Dublin very nearly pulled off another Houdini escape-act only to let the key for the final padlock slip from their grasp.

Five points behind with 12 minutes remaining and still three in arrears as the game ticked into four minutes of injury-time, Jim Gavin’s never-say-die team somehow gave themselves a chance to take the game to extra-time with the last kick of the match. Dean Rock stood over a free around 48 yards out, kicked it cleanly, and as it sailed through the air it looked like it was going to make it. With everyone in the stadium holding their breath the ball the ball struck the post, the final whistle blew, Dublin’s long unbeaten run was over, and Kerry were Allianz Football League champions. It was always going to take a magical performance to break this Dublin team’s spell, and that’s exactly what Kerry produced. They played with huge conviction and ambition, and in the second-half pulled Dublin apart with the quality of some of their football. It was only Dublin’s blunt refusal to be beaten that dragged them back into the contest. Any other team would have been well-beaten by Kerry’s combination of graft and enterprise. You expected this to be a flammable sort of encounter from the very start, but instead it was more of a slow-burner.

There were no big hits or tackles of note to in the opening quarter of the game, as both defences were content to screen their men rather than go full-blooded for every ball. There was a lot of lateral passing and precious few incisive attacking thrusts down the middle, so what scores there were tended to be landed from wide positions. Paul Flynn scored the first of those for Dublin, and it was a beauty, as he curled one over on the run from the right-hand side.

Kerry immediately responded through Jack Savage who was a late addition to the team in place of Stephen O’Brien and then took the lead through the always dangerous Paul Geaney. As the game settled down though it was Dublin who were looking the slightly more convincing team. Cian O’Sullivan was sweeping to good effect in front of his back-line like he usually does, and their half-forward line of Flynn, Ciaran Kilkenny and Diarmuid Connolly were starting to find their rhythm. Kilkenny came off second-best against the tigerish Tadhg Morley when the teams clashed in Tralee a few weeks ago, and he looked determined to balance that ledger. He constantly made himself available for possession, and when he won the ball he looked very dangerous with it, creating opportunities for himself and others. Points from Kilkenny and Connolly had helped Dublin into a 0-7 t 0-4 lead by the 21st minute, and it seemed as though the reigning champions were starting to build up an irresistible head of steam. Kerry stuck to the task though, with Donnchadh Walsh, David Moran, and Jack Barry particularly visible in this period of the game as they fought hard to keep Dublin within arm’s reach. The black-carding of Jonathan Lyne for a foul on Diarmuid Connolly looked like a deficit for Kerry, but when Connolly himself was black-carded afterwards shortly afterwards for and off-the-ball pull-back, the ledger was balanced. The game really burst into life in the final ten minutes of the half as the action quickly moved from one end of the field to the other, and every point was returned with one in kind. The pick of the scores in this period was one by Kilkenny, as he played a series of one-twos to eke out a shooting position for himself before finishing clinically. Kerry had the last say of the half though, a point from Barry who was a late replacement for Anthony Maher, and at the break there was only a point between the teams, Dublin leading by 0-10 to 0-9.

With the benefit of hindsight it’s now easy to say that Kerry were the growing force in the game, but you still wouldn’t have predicted the extent to which they seized the initiative in the second-half. They scored six points in a row without any reply between the 35th and 52nd minutes, and dominated Dublin in a way we just haven’t seen any team do for a very long time. David Moran and Jack Barry took complete charge of the midfield battle as Brian Fenton and Ciaran Reddin wilted out of the game. Morley also thundered into the contest to eclipse Kilkenny, while Kerry centre-forward Michael Geaney became one of the main conduits for the flow of the game. And at the tip of the spear was Paul Geaney, who was a very effective target-man throughout and accurate with his free-taking, apart from one notable example. Two classy points from play from the Geaney cousins had Kerry 0-15 to 0-10 ahead after 52 minutes, and as much as you always expect Dublin to find a way back into the contest, they looked in real trouble. Jim Gavin emptied his bench as he tried to spark his side into life, and Paul Mannion certainly made a massive impact after his introduction. He kicked a fine point to finally rouse a second-half cheer from the Dublin supporters, but it was his 61st minute goal that really brought the house down. Great work by Ciaran Kilkenny and substitute Michael Darragh MacAuley put him through on goal, and Mannion coolly rounded Brendan Kealy before getting off his shot. Kerry had gotten men back on the line, but Peter Crowley was unable to get his hand to Mannion’s shot. It was a one-point game now and you presumed that Dublin would find another gear like they usually do in these situations and leave Kerry choking on their exhaust fumes. But Kerry successfully slowed the game down in the vital minutes that followed Mannion’s  goal, and then crucially got the next score of the game through another Paul Geaney free.

The hugely inspirational Moran then drove forward to kick another brilliant point, and with a three-point lead established again, some of the blood may have briefly returned to the knuckles of Kerry supporters. Not for long. Dean Rock gave Dublin hope with two points, before Kerry sub Bryan Sheehan lifted the siege with a brilliant score after a driving run. But still Dublin refused to die. Mannion left the minimum between the teams again with another inspirational point, and the scene was set for that final dramatic act. Only time will tell what this result means in the bigger championship picture. Some of Dublin's longest serving players looked a little jaded today, but the likelihood is that the sour taste of defeat will make them doubly determined to come back stronger than ever. As for Kerry, the experience of beating their great rivals in this fashion can only accelerate the development of their new-look team. You get the feeling these two will go heads up again before the year is out, and for much higher stakes.