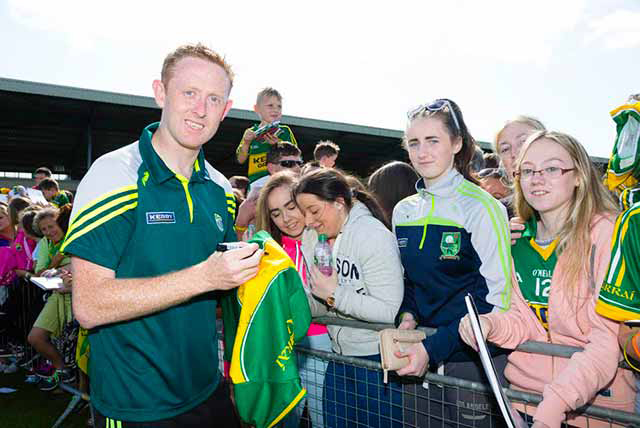 Colm Cooper, one of the greatest Kerry players ever to grace the game of Gaelic Football, has decided to call time on his illustrious inter-county career.  The Dr Crokes player, who will turn 34 in June, does so just two weeks after winning the one medal that had eluded him for many years – an All Ireland Club Championship medal.

Cooper first came to the attention of the Kerry GAA public when winning a Senior Co. Championship medal in 2000 at the tender age of 17 in the company of his brothers Danny and Vince when Dr Crokes defeated An Ghaeltacht.

A year and a half later he made his senior debut for Kerry in the Allianz League Division 2 Final against Laois in the Gaelic Grounds and duly helped himself to 1-2 in the No. 15 jersey.

Later that year he made his Championship debut against Limerick and although he and his Kerry team-mates had to give best to Armagh in the All Ireland Final of that year, he was recognised by the All Star selectors in his very first year at senior level. He went on to play in 9 All Ireland Finals, winning 4 medals. He received his 5th Medal in 2014 even though injury restricted his involvement.

In all he played 85 Championship games for Kerry scoring 23-283 in the process and along the way he won every honour available to him including Texaco Footballer of the Year in 2004 and 8 All Stars.

Cooper, an exemplary sportsman, endeared himself not only to the Kerry faithful but also to the wider GAA community where he was the perfect role model for our youth. He exuded class in everything he did on the field of play and we were once again reminded of that on St Patrick’s day when he scored the all important goal as Dr Crokes triumphed in the Club Championship final – 25 years after their first title when a youthful Colm Cooper was the team mascot.

Colm Cooper leaves a treasure throve of memories behind him for us all to savour and on behalf of Kerry supporters everywhere and indeed on behalf of the extended GAA community, today we say thanks for those memories Colm.

Today I wish to announce my retirement from the Kerry Senior Football team. It has been an amazing journey and one that I never wanted to end, however, I feel that this is the right time for me step away from inter county football. Representing the Kingdom for the past seventeen years has given me a tremendous amount of pride and satisfaction.

To my Kerry teammates that I have soldiered with throughout the years, thank you for your guidance, patience and friendship. I feel extremely lucky to have experienced so many wonderful highlights with you all.

To get the opportunity to play with, and against, some of the greatest players in the history of the GAA has given me memories that I will always treasure.

During my career I have been very fortunate to work with some outstanding Kerry managers. They gave me the confidence to develop my game which allowed me to perform at the highest level.

I would like to thank the Kerry County Board, backroom staff and medical teams for their constant help and support throughout my career.

A huge thank you to the loyal Kerry fans at home and abroad for their continuous support. I now become a supporter and wish the team all the best in their quest for honours in 2017.

I would like to thank my club Dr. Crokes for nurturing my talents and giving me the belief that there was no limit to what I could achieve, also to get the opportunity to Captain Kerry teams is something I’m extremely privileged to have done.

Finally to my family, without you none of my successes would have been possible. Through the ups and downs, you were the people that believed in me and kept me going. For this I am forever grateful.

It is very rare for people to achieve their ultimate dreams in life - I just have.

On behalf of the players and management I would like to congratulate Colm Cooper on his retirement from inter county football. He has been an incredible servant to the green and gold since his debut 15 years ago in a division 2 League final in 2002 where he scored a goal with his first touch of the ball which set the tone for what was to follow. His list of honours outlines what an illustrious career he has had.

I was lucky enough to have both played with and managed him. As a player when on the ball in matches I looked for him and in training I tended to steer clear of him. I thoroughly enjoyed working with him as manager. When I first took over Kerry one of the main things I wanted to do for the 2013 season was to release Colm from the confines of the inside line and allow him to express himself from centre forward. It was a fresh challenge for him and he set about learning the intricacies of his new position with gusto.

On a training camp to Portugal one evening in April that year we played flat out football. I can still vividly recall his performance on that beautiful sunny evening as he put on a clinic of how a playmaker should run the game from 11. The excitement that generated in the group was incredible. Unfortunately we did come up short in 2013 but he had an excellent summer culminating in his signature performance in the All Ireland semi final. There was one moment prior to James O Donoghue’s goal when he had to take a step back to buy himself the half yard and half second necessary for the move to develop sufficiently before he threaded a delightful pass to Donnchadh Walsh who in turn set up James for the goal. It was Colm exemplified in one score. His awareness and decision making is on a different level. His ability to slow everything down for a second, his skills and of course that bit of magic he possesses with a feint or a dummy is what makes him so unique.

His iron will to win and his leadership abilities shone through also. While recovering from a serious injury during the summer of 2014 he helped to drive the squad towards the All Ireland which depicted what a team player he was. He was one of the few players that managed to transcend county loyalties and was a player that people from all over the country loved to watch. He has given us all countless hours of enjoyment.

I wish him all the best for the future on and off the field.

Statement by the Chairman of Kerry County Committee - Tim Murphy

The announcement today of Colm Cooper’s retirement from Intercounty football marks the end of a glittering career of one of the most iconic figures in the history of Gaelic football.

Colm, not only inspired his fellow teammates on the field of play, but generations of people, young and old - all over Ireland and beyond. His natural talent and inherent ability to deliver on the big occasion pulled Kerry through many difficult games.

A gentleman both on and off the field Colm is an unassuming, self-effacing individual who epitomises everything that is great about the GAA. He captured the hearts and minds of people of all ages, is instantly recognisable and one of the most admired and revered Gaelic footballers of all time.

Words cannot adequately capture the contribution that Colm has made to our County.

On behalf of all Kerry people I wish to thank Colm for everything he has done and wish him all the very best in his retirement.

It was a privilege for me to work with Colm Cooper. He was the most intelligent player I have ever seen. I remember saying one time that Cooper had forgotten more about football than the rest of us will ever know. He always thought a couple of steps ahead of everyone else. Outside of his brilliance and his fantastic individual scores what was remarkable about Colm was that he got more satisfaction out of making a score than getting one himself. In that regard he was totally without ego and a complete team player. He has been a tremendous role model in Kerry and throughout the GAA world and the younger generation adore him.

I brought him in to speak to the Kerry Minor panel a couple of years ago and their mouths were open listening to him. He should stay involved in Kerry football in some capacity because we can’t afford to lose the kind of intelligence that he has.

For now, thanks for the great memories Colm – there will never be another one like you.

Colm Cooper always was, and still is, a fantastic clubman. He comes from a family that has made a tremendous contribution over the years to our club and many continue to play a key role coaching within the club.

Colm, probably the most gifted footballer of his generation, never forgot where he came from and has always made himself available whenever needed by the club.

Congratulations Colm on a great career with Kerry.

Texaco Player of the year 2004