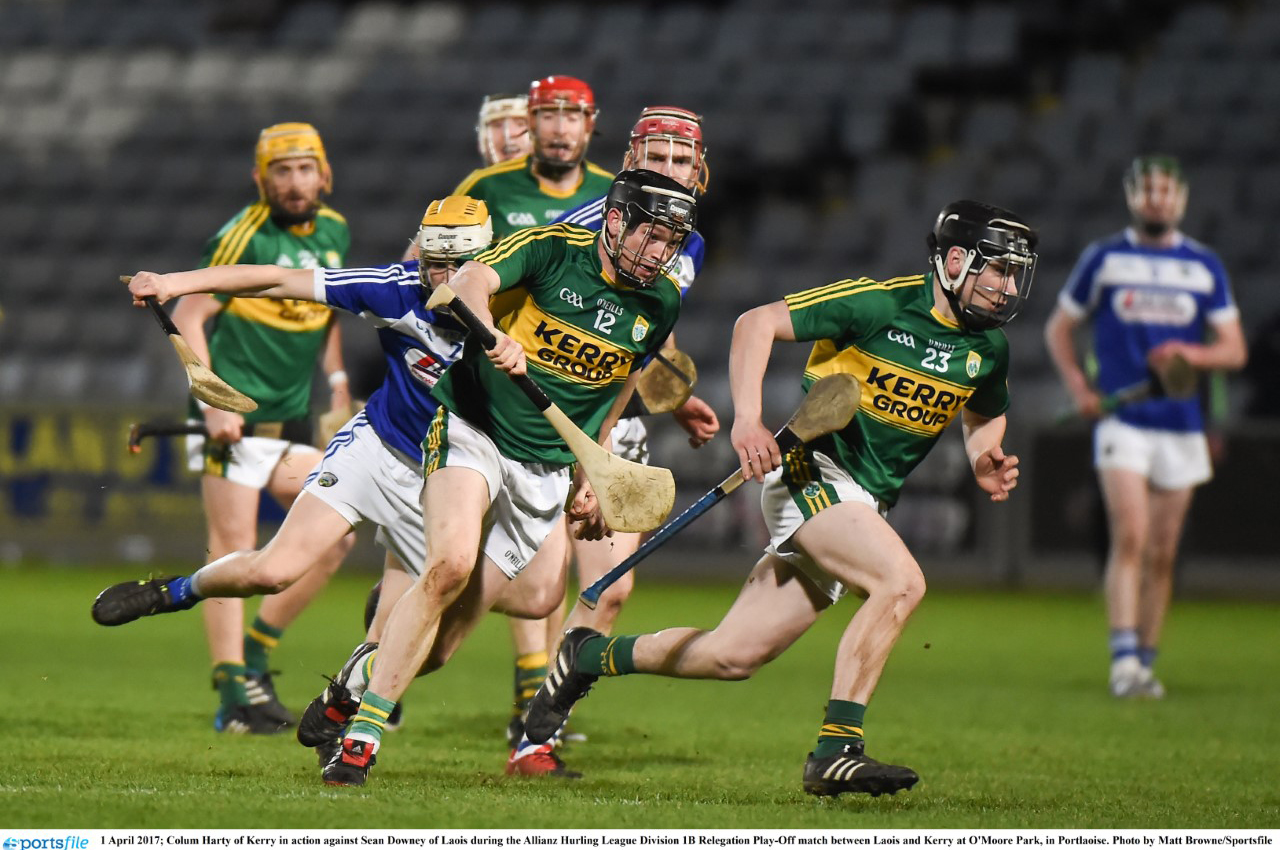 By Rory Delaney at O’Moore Park, Portlaoise Courtesy of GAA.ie

Laois came through an epic extra time showdown with Kerry to secure their Allianz Hurling League Division 1B status at O'Moore Park on Saturday night.

The game could hardly have started in a more dramatic fashion, with both teams pointing inside two minutes before Laois were reduced to 14 men. Neil Foyle was shown a straight red card for an off-the-ball clash with Tom Murnane, with the home side facing into practically the entire game at a numerical disadvantage.

If they were worried they didn't show it, as they hit the next three points through Leigh Bergin, Ross King and Paddy Purcell to surge ahead. Kerry responded through Patrick Kelly and Jack Goulding, before King got his second for Laois, from a free.

With the wind at their backs, Laois went three ahead, but that lead was soon wiped out, however, when Jordan Conway fielded a high ball, turned his marker and fired past Enda Rowland for a Kerry goal, 1-4 to 0-7 now after 18 minutes.

The Laois response was impressive, as Paddy Purcell and Ross King (2) sent them in front once more, before Cha Dwyer's long range free crept over the line for a goal.

Buoyed by that fortuitous major, Laois piled on the pressure, and King, John Lennon and Ryan Mullaney all pointed to see them go eight in front. They couldn't hold that lead to the break though, as Patrick Kelly lashed a loose ball in the Laois penalty area to the net.

Laois cancelled out that goal by rattling off three points without reply when play resumed, and they were comfortable for most of the half until Kerry came roaring back. Padraig Boyle rattled the net with a 21 yard free and then, with the last act of the game he scored another goal making it 4-14 to 1-23, and extra time was needed.

Captain Ross King came to the fore in the extra time for Laois, hitting four points to help his side into a three point lead at the midway point.

Kerry got back level late on, but Aidan Corby and Paddy Purcell struck for Laois to see them to a famous win.

The Kerry Senior Hurling Team to play Laois in the Allianz Hurling League Division 1B Relegation play-off in O’Moore Park Portlaoise on Saturday (7pm)  shows two changes in personnel from the side defeated by Offaly in Round 5. Brendan O’Leary and Mikey Boyle come into the side with Shane Nolan and Jordan Conway the players to make way.

The team captained by Daniel Collins of Kilmoyley is as follows:

This result against Offaly on Sunday last unfortunately means that Kerry must now face a relegation play off where they will meet Laois once again.

Under the rules of the competition, Laois will have home advantage because they have only played two home matches thus far in the League whereas Kerry have played three – the reverse of the situation last year when Kerry had home advantage in a similar situation.

The game will go ahead at Portlaoise on Saturday at 7pm.

Kerry have had the measure of Laois in recent time winning the Round 1 games played both last year and this year and also getting the better of the midlanders in the relegation playoff last year.