You are here: Home/ News/ Kerry vs Dublin - Match Report 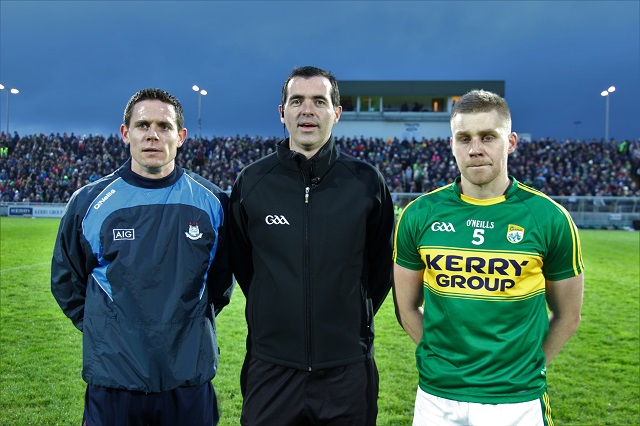 By Paul Brennan at Austin Stack Park – Courtesy of GAA.ie

Dublin's 33-game unbeaten run across League and Championship teetered but didn't topple in Tralee as they equalled the 34-game run set by Kerry some 84 years ago.

It was fitting that it was team from the Kingdom that had the chance to beat Dublin and preserve their county's record and while they came mighty close to doing both, Dublin found a way.

It took every bit of the 74 minutes in front of a 12,000 capacity crowd in Austin Stack Park but Paul Mannion was the Dublin saviour with an equalising point to share the spoils and break Kerry hearts.

Kingdom boss Eamonn Fitzmaurice will privately curse some missed chances and spilled turnovers – none more so than the mistake that led to Mannion's equaliser – but he won't question his players' character and work ethic on this occasion.

The draw arrested a run of four defeats to Dublin and will plump up Kerry's confidence ahead of a possible Championship rematch later in the summer.

The first half was a spiky affair with yellow cards almost as frequent as scores in the first 25 minutes with tempers spilling in front of vociferous crowd with plenty of Dublin support packed into the old ground.

Paul Murphy screwed an early goal chance wide for Kerry before Peter Crowley and Paul Geaney (two) helping Kerry into a 0-3 to 0-2 lead after 25 minutes. David Moran then had his goal-bound effort deflected out for a '45', which Brendan Kealy converted.

Three Dean Rock frees brought Dublin back into the game and the led for the first time, 0-5 to 0-4, by the 34th minute, with referee Sean Hurson working hard to keep both teams' discipline in control.

Geaney and Stephen Cluxton picked up yellow cards for some wrestling in the Dublin goal, before the latter had to save smartly from the the former to prevent a Kerry goal as the team went to the interval inseparable at 0-5 apiece.

The first four scores of the second half were Kerry's – Geaney (two), Moran and Kevin McCarthy – as Kerry led 0-9 to 0-5 after 50 minutes, but the next six went to Dublin who sensed their unbeaten run was seriously under threat.

Rock added two frees either side of a scramble in the Kerry goalmouth before McHugh and Eoghan O'Gara drew them level.

Two more Rock frees had Dublin two ahead on the hour mark, but Geaney added his sixth and seventh points to level it again.

Barry John Keane edged Kerry ahead again and when Donnchadh Walsh doubled Kerry's lead in the 70th minute Dublin's run was under serious question, but somehow they found a way – they always seem to.

Rock's 72nd minute free halved the deficit and then Mannion remained the coolest man in the cauldron to mine the equaliser.

Dublin finished the final seconds with 14 men after Ciaran Kilkenny was booked a second time, and Dublin take on Roscommon in Croke Park next weekend where anything other than defeat will see them assume the unbeaten record all for themselves.