Comfortable for Kerry U21 v Waterford

You are here: Home/ News/ Comfortable for Kerry U21 v Waterford

Comfortable for Kerry U21 v Waterford 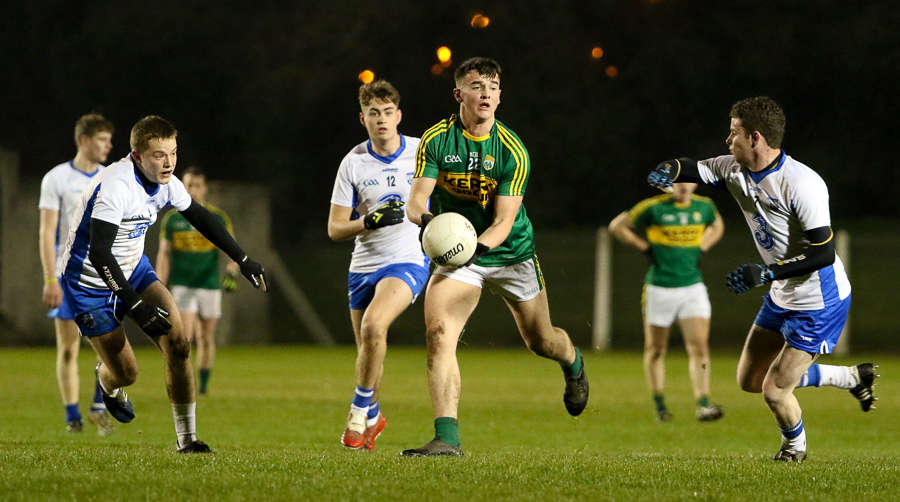 Comfortable victory for Kerry over Waterford at Fraher Field

Kerry secured comfortable passage to the Munster U21 football final with this facile victory away to Waterford.

It was game over at half-time, Kerry in front by 1-12 to 0-1. The pre-match forecast of a sizeable Kerry victory almost rang true from as early as the 20th second – Lee O’Donoghue putting Cathal Bambury through on goal. Fortunately for Waterford, though, Bambury’s kick hit the post.

The visitors didn’t have long to wait to open their account. Killian Spillane, Andrew Barry and Cathal Bambury had them three clear come the fourth minute. Bambury, Sean O’Shea and Matthew O’Flaherty doubled their advantage before David Looby put the home side on the board 12 minutes in.

That was to be their sole score of the half and it was Looby who kicked their second when it did arrive on 33 minutes. That was also a dead-ball effort and not until Conor Gleeson burst past four green and gold jerseys on the 40th minute did Waterford have a score from play to their name.

Killian Spillane supplied the Kerry goal in the opening period following a superb run and layoff by the lively Sean O’Shea. Two points from Tom O’Sullivan sandwiched a white flag from Spillane to leave the Kingdom 14 to the good at the break.

They’d ease off in the second period safe in the knowledge that they would not be caught. Both teams finished with 14 men; Cormac Coffey picked up a second yellow on 42 minutes. In the subsequent action, Waterford’s Cormac Curran hit Andrew Barry off the ball and received a straight red card.

Kerry Under 21’s looking for a final place

Kerry Under 21 footballers will be attempting to secure a Munster final place when they travel to Fraher field in Dungarvan on this Wednesday evening to take on Waterford in the Munster semi final. A fancied Kerry side that contained nine players who had featured in last year’s campaign, did not have it all their own way against a plucky Clare side in the quarter final at Austin Stack Park on Wednesday last before winning comfortably in the end by 1-17 to 2-8. That game is sure to stand to the Kerrymen however, while Waterford make their first appearance of the campaign. Kerry manager Jack O’Connor has kept faith with the side that started in Tralee and no doubt he will be looking for a tightening up in defence following the concession of two goals last time out.

The game throws in at 7:30pm and the winners will play Limerick or Cork on March 29th in the final.

The Kerry Under 21 Football Team to play Waterford  in the Munster Championship Semi Final at Fraher Field Dungarvan on Wednesday evening @ 7:30pm is unchanged from the side that defeated Clare in the Qtr Final last week.

The team, captained by Brian Sugrue of Renard is as follows:

With the exception of Matthew O’Sullivan, all of the side have played in successful All Ireland minor winning sides since 2014 with Daniel O’Brien and Sean O’Shea members of last year’s winning side.