Galway too good for Kerry AHLDiv1B

You are here: Home/ News/ Galway too good for Kerry AHLDiv1B

Galway too good for Kerry AHLDiv1B 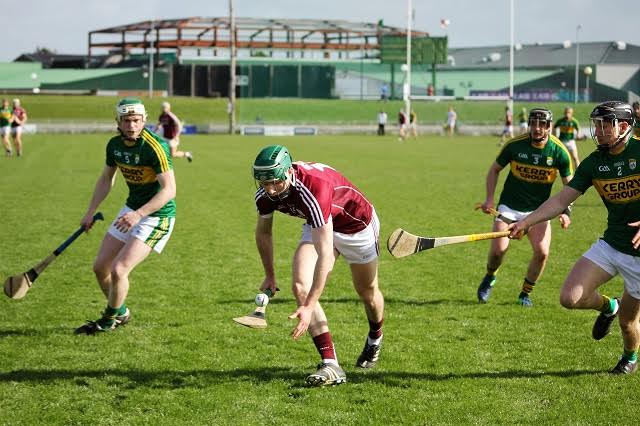 By Paul Brennan at Austin Stack Park, Tralee for GAA.IE

In the end class usually tells and so it was in Tralee this afternoon as Galway claimed an expected third Division 1B win in this fourth round contest against a courageous but limited Kerry team.

The return of Joe Canning after suffering a hamstring injury in last year's All-Ireland semi-final was the main talking point in the build-up, and the Portumna man finished his day's work with nine points after displaying some understandable rustiness in the first half as he eased himself back into action.

The expected Galway goal glut never materialised, with Padraig Brehony's first half strike the only green flag raised in the game. Indeed, that goal was the difference between the teams at the interval as Kerry matched Galway score for score in the opening half hour.

Galway's class told in the end, however, and the second half turned into a procession of points from the visitors, spear-headed by Canning and the excellent Cathal Mannion who notched five points from play.

Galway manager Michael Donoghue will be grateful for the test Kerry laid for his team in the first half, with the Kingdom keeping the visitors honest with some gutsy hurling, which put Galway under a lot of pressure and sent them into cul-de-sacs and roadblocks.

Canning missed a couple of early chances as he looked to get his radar aligned, and when he did find his range Kerry's Shane Nolan and Jordan Conway matched him from placed balls to keep Kerry in touch.

Points from Canning and Paul Flaherty saw Galway open up a 0-5 to 0-2 lead by the 17th minute but Kerry stuck manfully to their task and scores from Nolan (two frees), Conway and Padraig Boyle made it 0-7 each after 31 minutes.

Kerry would have by delighted to have got to the break on level terms but a lapse of concentration allowed Brehony sneak through from midfield to get on the end of a long pass and finish past Martin Stackpoole to leave to 1-7 to 0-7 at half time.

Galway's touch was untypically poor in the first half and they were guilty of several unforced errors, but they tightened up considerably after the break. With Kerry tiring and playing into a stiff wind, Galway moved through the gears and outscored the hosts 15 points to five in the second period.

A couple of Canning interceptions were delightful and the Portumna man strongly protested that he had goaled after his shot hit the crossbar and the post and came back into play, but to no avail.

Kerry face Offaly in a fortnight where a win would earn them a quarter-final place, while Galway travel to Limerick.

The Kerry Senior Hurling Team to play Galway in Round 4 of the Allianz Hurling League on Sunday next in Austin Stack Par  at 2 pm shows 1 change in personnel from the side defeated by Wexford in Round 3.

Shane Nolan comes back into the side in the half forward line after suspension with Daniel Collins moving to the defence and Keith Carmody the player to lose out.

The team captained by Daniel Collins of Kilmoyley is as follows:

Kerry  have two home games left in the Allianz Hurling League the first of which is on Sunday next when Galway are the visitors to Austin Stack Park in Round 4 at 2.00p.m.

Following their first Round win over Laois, Kerry have suffered successive defeats in the competition to Limerick and Wexford and now come face to face with a Galway side who are in joint second place in the table with Limerick. Wexford top the table with full points, while Kerry and Laois have 2 points apiece.

Admission on the day costs €15 but it is available at a reduced price of €12 if purchased online on www.gaa.ie, from the Kerry GAA offices in Austin Stack Park, from the Kerry GAA Store in the Outlook Centre in Killarney or at participating Centra or Supervalu stores around the county up to midnight on Saturday.

The remaining league fixture will be against Offaly on Sunday, 26th March.

The Kerry minor hurlers have been paired with Carlow and Wicklow in the 2017 Leinster minor hurling league.

Their opening game will be against Carlow on this Saturday, 11th March, 12.30p.m. in Dr Cullen Park.

Round 2 will be away to Wicklow on Saturday, 18th March.