You are here: Home/ Centre Of Excellence: Supported at Home & Abroad

American businessmen and artists are joining Kerry artists, craftsmen and companies in a show of unprecedented support for the new Kerry Gaelic Athletic Association (GAA) Centre of Excellence that is scheduled for completion by fall 2016. A glamorous gala event at the Plaza Hotel in New York City on May 28, plus other events in Boston, Chicago and London this spring, will bring the fundraising effort to 85 percent of the €6 million goal to cover the cost of facility development and construction.

The New York fundraiser expands on the success of last year’s event that saw 350 businessmen and supporters pay $1,000 a seat to attend, meet Kerry Gaelic football legends, and bid on GAA memorabilia. It raised nearly a half-million dollars in one evening for the Centre of Excellence. This year there will be 400 attendees, and the auction will feature high-end works of art and craft from Kerry-based and New York artists, plus items from international sports figures and local luxury goods producers.

Some of the unique Kerry donations created specifically for the event include a portrait of Mícheál Ó Muircheartaigh by renowned painter Liam O’Neill, and a four-foot-high urn by potter Louis Mulcahy depicting Saint Brendan sailing to America and the Statue of Liberty. Tony O’Shea of Ambri Wood Pieces carved a Gaelic football out of 200-year-old wood that is mounted and signed by five top All-Ireland winners.

Jimmy Deenihan, TD, Minister for Diaspora Affairs and five-time GAA All-Ireland champion, says art and Gaelic football have long been closely aligned in Kerry. “Visual and performing artists, writers and musicians have so often taken inspiration from the great Kerry players,” he says. “In Kerry, football is regarded as an art form as much as a sport.”

Deenihan is impressed with the support of the Irish diaspora, in addition to the Kerry-based artists and companies. “This is one of the most successful fundraising initiatives ever undertaken by a county in New York,” he says. “The success is due to the reputation of the county team, the loyalty of the diaspora to the home country, and the good standing of the organizers in the New York business community.”

There will also be a benefit to the diaspora says Deenihan, as young players and GAA clubs from around the world can come and develop their game skills at the Centre of Excellence in summer camps, while their families take a holiday in the vicinity. “It could become another pillar in the Kerry tourism industry,” he adds.

The Kerry GAA Centre of Excellence incorporates two locations, a co-hosted GAA facility at the Institute of Technology, Tralee, and six playing fields with a training facility at Currans near Kerry Airport. Initial planning permission has been granted, and site work began at Currans on the first three sand-based pitches in the fall, 2014. They will be ready for play by spring 2016, says Patrick O’Sullivan, Kerry GAA County Board chairman

The clubhouse at Currans is still in the planning process, and the GAA County Board hopes to get final approvals by this August, with groundbreaking soon afterwards, says O’Sullivan. The clubhouse should be completed by early next summer, and the entire project should be done before the end of 2016, he adds.

The Currans site is 48 acres with a jogging track around the perimeter of the grounds, explains O’Sullivan. Five of the six playing fields have a sand base for proper drainage; the last one would be converted eventually to an all-weather field with artificial turf. All are floodlit for night play. The nearly 40,000-square-foot clubhouse has a gym, locker rooms, a cafeteria, offices and a players lounge.

Kerry GAA facilities at both locations are to be used by all county GAA teams from youth to elite seniors, plus underage development squads, including hurling and Gaelic football teams, male and female. Facilities for disabled athletes will be featured in Tralee. In addition to sport skills development and athletic conditioning for the players, there will be sports medicine services, physical therapy, summer camps, and lectures on topics like nutrition, alcohol awareness and suicide prevention, O’Sullivan adds.

Kerry head coach Eamonn Fitzmaurice says the impact of the new facilities will be huge in terms of team preparation. “We’ll finally have a base that we can call our own to train our teams to the best of their abilities with floodlit pitches and a selection of equipment all in one place,” he says.

There are currently only five floodlit pitches in County Kerry. With more kids playing per population than any other county and 73 Gaelic football clubs, competition for lighted playing fields in winter is fierce. “It’s quite a challenge to rely on club facilities in the winter,” says Fitzmaurice, adding sometimes the team must travel to Limerick or Cork to train. Plus some of the players drive long distances for training since it’s such a big county – the new facility is geographically very central, he says.

Fitzmaurice says the Centre of Excellence will be brilliant from the youth perspective too. “We’ll be able to expose players to high standards at as young an age as possible, and move them through the ranks with the best coaching and facilities. The state-of-the-art training facilities will inspire them to take the sport seriously,” he says.

Kerry has fallen behind other counties that have built centres of excellence in the past 10 years or have access to university facilities like Cork, Fitzmaurice maintains. “The facility will be more convenient and more professional, it will be fantastic for training and our identity, and it will take us another step into the future.”

Pat Spillane, RTE game commentator and winner of eight All-Ireland medals, agrees that from a logistical point of view a central training location is vital. But perhaps more importantly is the need to create the correct environment for the next generation of footballers with proper pitches, coaches and gym equipment, he says.

“Kerry footballers are skilled, we have a huge tradition, but we took our eye off the ball for several years,” says Spillane. “We assumed there was a conveyor belt of talent coming through, but the game has moved on. It’s all about coaching and development now. The new facility will lay the foundation for the future.”

To date, €4.7 million has been raised for the €5.8 million project, leaving €1.1 million yet to be raised. “There’s a perception that the national GAA has plenty of money to pay for training facilities, but they spread their profits to all the GAA clubs in Ireland,” explains O’Sullivan.

The national GAA/Croke Park, the Munster GAA Council and team sponsor Kerry Group each donated a million euros. Friends of Kerry pledged €700,000 and the National Lottery gave €300,000. The county board must raise the remainder, and last year’s New York fundraiser put a dent in the total needed, says O’Sullivan.

“Winning the Sam Maguire Cup should be a big help in fundraising this year, as it gives the effort more gravitas,” says Fitzmaurice. “Raising money is tough work, and it’s really appreciated. The support from Kerry artists and businesses, as well as those overseas, is incredible, and humbling really from my perspective. The players and management are excited about using the facilities next year – the sooner the better,” he adds.

“Supporting the Kerry GAA Centre of Excellence benefits everyone in the county because the success of the team is a great source of pride and joy for all those living in the Kingdom or with Kerry roots,” says New York event co-sponsor Maurice Regan, Listowel native and president of J.T. Magen & Company, one of the largest construction companies in the New York metropolitan region.

Spillane says there’s a long history of Irish immigrants supporting the homeland, going back to the potato famine. “The Irish diaspora have never lost their sense of identity and love of their homeland, or their willingness to give back,” he says. 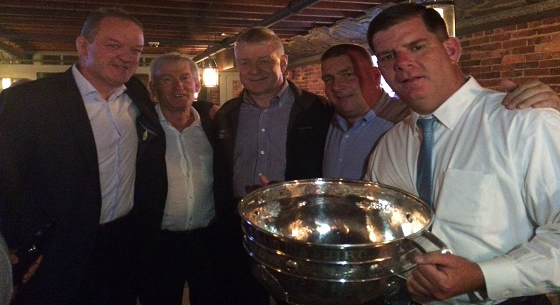